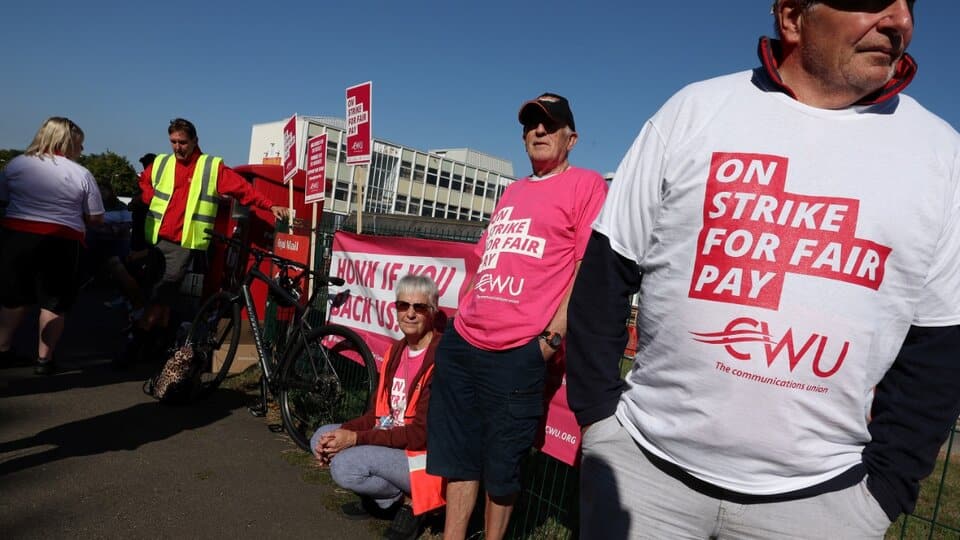 Double-digit inflation for the first time in forty years, a fall in real wages to the worst level in decades, and transport strikes are just some of the signs of widespread discontent. The national health system is on the verge of collapse, large areas of the country with no water in the heat of high temperatures drought, energy prices are set to double in October and labor unrest is skyrocketing. Even criminal lawyers have just announced strike.

Sometimes it seems that there is no sector in the UK that works. Prime Minister Boris Johnson resigned in June and his replacement would not be announced until 5 September. This G7 country ship is damaged, wrecked and in no charge.

They have long triggered alarm signals in the conservative media. “Virtually nothing works in the UK,” says conservative weekly “The Economist.” “The country is crumbling”, diagnoses the “Financial Times”, another pillar of the establishment. One of the most lapidary diagnoses is that of a star columnist for the ultraconservative morning newspaper “Daily Telegraph”. “Our astonishingly rapid decline is tragic and yet not surprising. We are nearing the end point of a quarter-century of political, intellectual and moral failure that encompasses much of our political class,” writes Alister Heath.

The problems go beyond the pandemic or the war with Ukraine. “There has been a sudden awareness that the era of Covid-19, Brexit, the war in Ukraine and the climate emergency are exposing fundamental flaws that have persisted for decades,” says John Harris, columnist at The Guardian.

The mantra of the Conservative government, which took power in 2010 after the global financial crash, was that the problem was fiscal deficits and the solution was to reduce spending and encourage private investment by cutting taxes on the wealthy and corporations.

Margaret Thatcher turned this formula into a dogma in the 1980s. Conservatives of the 21st century did not change their discourse: the results were similar to those of the “Iron Lady”.

Despite having one of the lowest tax rates, the UK is at the bottom of the table for private and public investment of the G7 countries. “This lack of investment comes from decades. The obsession with spending has meant that instead of maintaining and improving infrastructure, it has been allowed to collapse. The United Kingdom did a lot more work than did Germany and France. But we lag behind in terms of productivity because we invest so little in key areas, including technology, training and research,” says economic editor for The Guardian Larry Elliott.

This scorching summer drought made it clear that the corporations managing the water supply, which were privatized in the 1980s, have not built any new reservoirs in recent decades, despite a population increase of ten million people. The same carelessness in the maintenance of a system is seen, in large part, to the Victorian era. The result is that today some thirty million people face restricted access to the water and that much of the English south coast, from Cornwall to Devon, is prohibited from going to sea due to water pollution.

As in the rest of the corporate sector, taxes on responsible companies have been reduced to 19 per cent from 26 per cent in 2010. But instead of encouraging investment, profits were used to pay dividends to shareholders: seventy billion dollars (equivalent to over 57 billion pounds) over the past thirty years. The executives of sector companies have also not missed the party. Over the past two years, amid the pandemic, more than $35 million in bonds were awarded. By comparison, Scottish Water, which remained in the hands of the state, invested about 35 per cent in infrastructure per household over the same period.

The energy sector, which made windfall gains from the war, is raising prices like a charm. An eighty percent increase in rates was confirmed this Friday, which would take effect from 1 October, the eve of the harsh English winter. Shareholders and executives, happy: not so much the public. Even in traditionally conservative areas such as Surrey in the south of the country, voters have become disenchanted with the privatization system and are willing to switch parties. “I’ve almost always voted Conservative, but I’m not going to do it again. Profits being made by water and energy companies are a scam. They’d rather go to jail than earn a million-dollar bonus,” said the retiree says Mary Barnaby.

At the public sector level, the decline and reduction in investment since 2010 means that the national health system (NHS) today has the lowest number of hospital beds per capita in a developed country, something noted during the pandemic. went. , The virtual wage freeze since 2010 led to an exodus of nurses and doctors, an exodus only partially offset by hiring professionals from developing countries. NHS staff are becoming more like the United Nations in their mix of nationalities, yet one in ten nursing positions remain vacant.

While states in Germany, Spain or Estonia invest in the railway sector to bail it out of the crisis that resulted from the pandemic, the British government announced cuts equivalent to more than $2.5 billion. There have been eight strikes since June 21, which have brought the rail network to a standstill.

The general secretary of the RMT, the railway union, Mick Lynch, warned that the current discontent could end in a real general strike (the last time being in 1927). “This is something that will be decided by the labor union. But what we are going to see in education, health, transport and the private sector is synchronous strike action. There have been clear signs of this labor unrest over the past two months: thousands of flights canceled in the middle of the summer season, coercive measures in the port of Felixstow, which accounts for 48 percent of the container trade, strikes at oil companies, factories and even the Amazon. Too.

In August, the inflation index jumped over ten percent for the past twelve months. With energy rates practically doubling from October, the Bank of England expects thirteen percent for the coming months. The calculation is that some fifteen million people live in what is called “energy poverty” (they allocate ten percent of their income to pay for gas and electricity). In the food banks of the most deprived areas, many do not buy potatoes because they will cost them to cook: in the British winter, the dilemma for many would be whether to burn or eat the stove.

more of the same

The crisis has been compounded by a virtual one since Boris Johnson resigned in June and remained in office without depriving himself of marrying and taking vacations in a headless government. Decisions in more than half of the ministries are not made unless there is no alternative: in the press they baptize this “zombie government”.

The problem is that two candidates make the same offer to replace him. The favourite, Chancellor Liz Truss, promises a £27 billion tax cut that will prompt companies and billionaires to encourage investment in a country that is still dealing with the fiscal hole left by the pandemic and Brexit. His rival, former finance minister Rishi Sunak, is a bit more cautious and says this is a target to be achieved later. But deprived of that tax-paying mantra, there is little or nothing in his program.

A poll late last week gave Labor an eight-point lead over the Conservatives and put their detached leader Keir Starmer ahead of them as a better prime minister than Johnson, Truss or Sunak.

The general consensus is that the new prime minister would have little legitimacy: he would be elected by some 200,000 members of the Conservative Party, most of them over the age of 60 or 70 living in rural areas. The rest of the state, which faces strong separatist, social and generational tensions, will play the role of a guest of stone, a volatile situation amid the crisis. Despite all this, despite the fact that Truss and Sunak are tainted by joining Johnson’s cabinet, it is possible that they will have a brief honeymoon that awaits new governments. It is speculated in some media that whoever wins will try to take advantage of this resurgence of hopes to reform a massive aid package for cost of living and call for early elections.

With so little legitimacy and so many economic and social holes, it is difficult for the government to reach December 2024, especially in a country that has a long tradition of holding premature elections. But the underlying problems will not go away with a fresh face, regardless of party, beyond the political and electoral ups and downs.