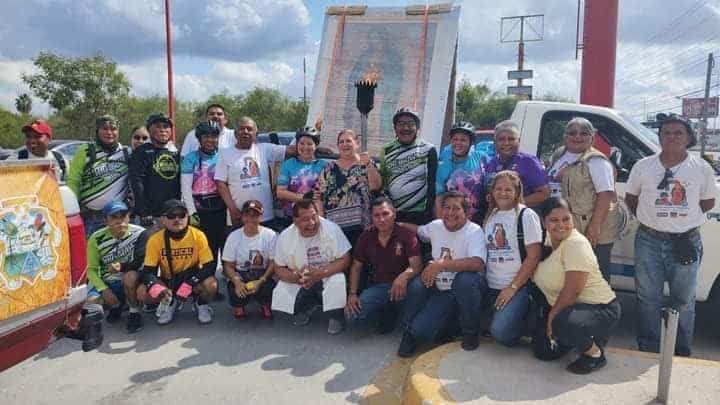 Guadalupan Torch Run which came out on September 4 of this year Basilica of Guadalupe in Mexico City and who visited communities that turned out migrants puebla, He arrived in New York in the United States.

For this Monday, the contingent led by the image of the Virgin of Guadalupe, San Juan Diego and a burning torch will pass through Central Park and the Plaza de Nacional Unidas to reach the Cathedral of San Patricio.

within the framework of the edition XX of the Guadalupana Torch Race, Migrants, relatives and friends are fostering hope and unity among families, despite the separation caused by the migrant phenomenon.

“We want all cultural groups participating in the Mexico-New York Guadalupana Torch Run to feel that you make our communities beautiful. You connect us to our past, our childhoods, our families and our towns. You Let that spirituality come to strengthen Nuestra Morenita so that we can resist with hope whatever befalls our world”, declared the Tepeyac Association, the group in charge of organizing the race.

On the other hand, Manuel Romero Cagigal, The coordinator of the Human Mobility Commission of the Archdiocese of Puebla, which supports the Guadalupana torch run, highlighted the importance of maintaining hope despite difficult moments.

Leading Sunday’s mass called “Gaudete,” which in Latin means “joy” or “to be happy,” Romero Cagigal, Bishop of Paterson, New York, and Kevin Sweeney stressed that Puebla’s Catholic Church and its relatives are close. There are migrants, despite the distance.

“I bring you a fraternal greeting from the Church of Puebla. Probably many of you come from there who know that we are together. Feel the closeness of the blessings of many priests, our Archbishop Monsignor Victor Sánchez, who asked me to send a very special greeting. So many communities of our archdiocese”, he said.

Last Sunday, September 25, the Guadalupana torch relay passed through the shrine of Santiago Apóstol in Izúcar de Matamoros; He continued through to the shrine of Our Lady of Guadalupe in Atlixco. On Monday the 26th, the torch passed through San Bernardino Chalchihuapan, a tributary board belonging to the municipality of Ocoyucan, and then reached San Bernabé Temoxtitla in the same municipality. For this Tuesday, September 27, the contingent passed through the capital of Puebla and then through San Cristóbal Tepontla, a town in San Pedro Cholula. On September 28, the Guadalupana torch visited San Gabriel Omatextla in Santa Isabel Cholula; San Diego continuing through Cuchayotla in San Pedro Cholula; It passed through the cities of San Sebastián Tepalcatepec and Santa María Zacatepec in the municipality of Juan C. Bonilla; and reached Tlatenango. Starting on 9 September, the team visited various communities in the state of Tlaxcala.