As Joe Biden campaigned for president pushing gun control, the United States was passing a grim milestone: the most firearm deaths recorded in a single year since systematic tracking began.

more than 45,000 people were shot to death in 2020, according to data the Centers for Disease Control and Prevention released late last month. The agency has yet to publish last year’s figures, but the spike in gun violence that started alongside the pandemic continued to increase in 2021, according to the Gun Violence Archivean independent tracker.

“The president needs to show leadership on this,” said Noah Lumbantobing, communications director for advocacy group March for Our Lives. “And the fact is he hasn’t been in the last year.”

On the trail campaign, Biden championed an assault weapons ban, uniform background checks, an end to internet firearm purchases, and a slew of executive action measures.

But since he’s been in the White House, his ambitions increasingly look more like wishful thinking.

Democrats control both chambers of Congress by a razor-thin margin. But the party has struggled to push Biden’s priorities through the Senate, where complicated rules and opposition from his own party’s more conservative members give Republicans the upper hand.

None of the big-ticket items on most gun control groups’ wish lists have made it into law. A bill that would implement universal background checks is stalled in the Senate, where it doesn’t have enough votes to get to the floor for debate. A universal background check law polls well and enjoys bipartisan support – partly because those checks are already required, except at gun shows and private sales or gifts within a state.

But even that hasn’t been able to make it through the Senate. Given that, more ambitious reform measures with greater conservative opposition, like an assault weapons ban, appear dead in the water.

The Violence Against Women Reauthorization Act might offer reformers a glimmer of hope. The bill would bar people with domestic violence-related convictions from buying guns, even if the offense didn’t involve a spouse or someone they live with – closing a prominent loophole in current firearm restrictions. The bill would also ban people from buying guns if convicted of misdemeanor stalking. The House of Representatives passed the bill with bipartisan support in March, though its prospects in the Senate face the same uncertainty as the proposed background checks law.

Biden has mostly used executive action to play around the edges of gun reform. Last May, Attorney General Merrick Garland signed a crackdown on “ghost guns,” the unserialized firearms that buyers can build from kits at home. The Justice Department will also impose stricter regulations on stabilizing bracesa device that makes it a little easier to aim a pistol one-handed by tethering it to the forearm.

But even those modest agency rules, which will be implemented by the Bureau of Alcohol, Tobacco, Firearms and Explosives, are not yet finalized. And his attempt to nominate a prominent reformer, David Chipman, to head the ATF crashed and burned amid opposition from Republicans and some moderate Democrats in the Senate. Biden has yet to offer a replacement.

Biden’s struggles with Congress will almost certainly get worse. His tenuous hold on the Senate could slip away with the upcoming midterm elections. A poor showing could also imperil the democratic majority in the house.

That doesn’t make the situation hopeless for gun reformers, said Adzi Vokhiwa, federal affairs director for the Giffords Law Center, a legal group founded to fight gun violence. She’s still optimistic that the Senate might force a vote on the background checks bill, which would, even if it fails, make it clear where legislators stand.

“We certainly hoped for a lot with Democratic control of both chambers of Congress. Legislating gets tough as you get closer to an election, but there’s still plenty of time,” Vokhiwa said. “As long as we have people in Congress and the White House who are committed to this issue, we just want to see progress.”

Reformers from all sides of the spectrum largely agree that tackling the social upheaval that came along with the pandemic is the key to decreasing gun violence. Biden’s infrastructure bill, which the Senate also holds in limbo, would funnel $5 billion towards community violence intervention ― an approach with a track record of success.

The number of gun deaths and homicides marks a sharp turnaround after a long period of decline. The murder rate spiked 30% in 2020, before continuing to climb last year.

That figure seems high partly because the murder rate had dipped to historic lows through the 2000s. The US population has also grown, so despite the all-time high in total number of annual gun deaths recorded by the CDC, the homicide rate is still below the most recent peak in 1991 of 10 per 100,000 people. 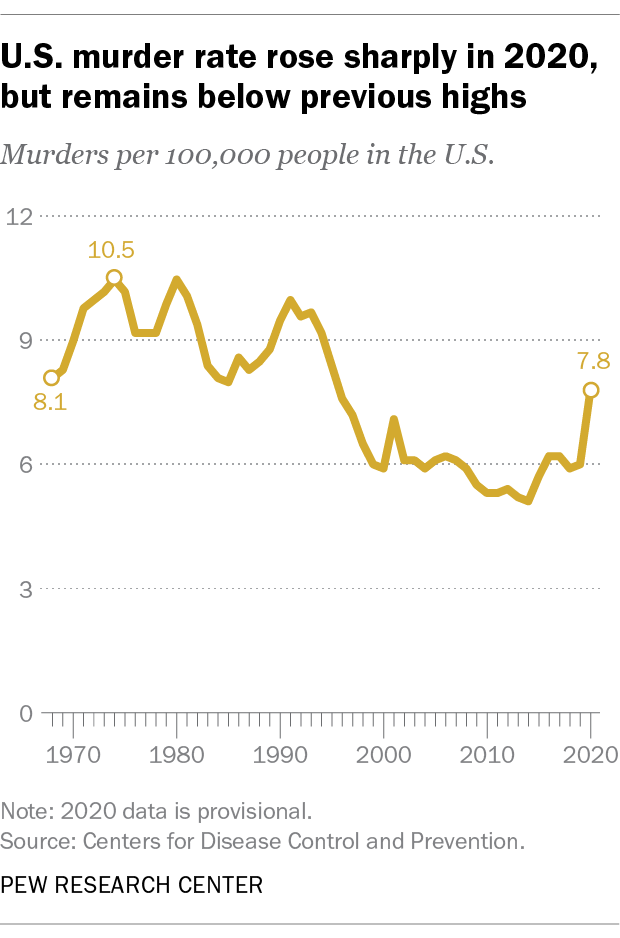 But the rising rate of violence worries many because it sharply bucks the long-standing trend towards greater public safety.

It’s unclear exactly what’s behind rising gun violence, though no one doubts the pandemic played a role, along with frayed police-community relations in the wake of 2020’s summer of protests. Americans also went on their largest gun-buying spray in history since the pandemic started, with about 42.7 million firearms sold since 2020 began.

“This has been a unique time in terms of gun violence and we don’t have all the answers as to what the causes are,” Vokhiwa said. “But we do know from the past that having such easy access to guns is a problem.”