Guterres warns that many countries are on the verge of recession 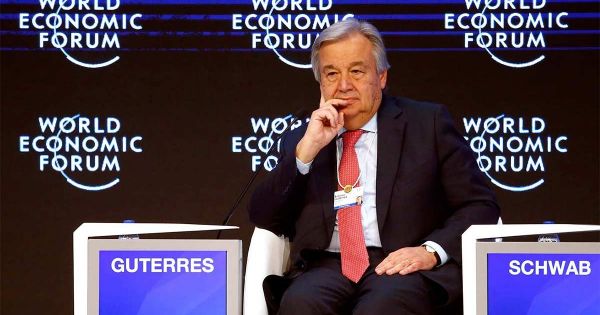 Guterres warns that many countries are on the verge of recession

UN Secretary-General Antonio Guterres on Wednesday during his appearance before the World Economic Forum (WEF) in Davos (Switzerland) condemned that many countries are on the verge of recession amid rising inflation in the economy, which has not happened yet. Recovered from the Covid-19 pandemic.

The official also called on the United States and China to stop fuel divestment around the world. In Guterres’ words, the conflict between these two powers, which he dubbed the “Great Divide”, could cost the world economy $1.4 trillion.

“There are many areas where China-US relations differ, especially on human rights and regional security, but it is possible and necessary that they engage together on climate action, trade and technology to avoid such divergence. and even the possibility of a future confrontation”, continued the Portuguese diplomat.

Guterres also called on China, the US and the rest of the G20 countries to unite for a climate deal that includes additional efforts to limit the increase in the planet’s average temperature to 1.5 degrees Celsius. The battle for the objectives of the Paris Agreement “can be won or lost in this decade, and at the moment we are losing it,” Guterres continued. He recalled that, at the current rate, this century would exceed 2.8 degrees of warming, “with catastrophic consequences.”

“Parts of our planet will become uninhabitable and for many people it will be a death sentence,” Guterres insisted. He also argued that the world’s “challenges are interconnected, piling up like a car pile-up, and it will be hard to find solutions to them in better times, especially now that the world is far from united and Instead it is facing enormous levels of geopolitical division and great mistrust”.

He stressed the need to reform a global financial system that “systematically denies debt relief and support financing to vulnerable countries” and called on private entrepreneurs to change their models and practices to achieve the Sustainable Development Goals. called for, including the expansion of economic opportunities. Women, equity in the distribution of vaccines, and global food security.

Guterres also claimed that some fossil energy producers were fully aware in the 1970s that their flagship products were bad for the planet, but went ahead with their business nonetheless. He made these comments in Davos following the publication of a study about US giant ExxonMobil four decades ago.

“Some fossil fuel producers were fully aware in the 1970s that their flagship product was going to burn up the planet. But, like the tobacco industry, they paid little attention to their own science. Some oil giants sold the big lie ,” Guterres compared that scenario with tobacco companies in the United States having to pay billions of dollars in legal settlements to treat smokers. “In the case of the tobacco industry, they rely on their own scientific findings. Gone, kept a big lie, and now those responsible are held to account, just like tobacco once was,” he said.

In the 1980s, ExxonMobil had highly accurate global warming predictions by its own scientists that actually came true decades later. “Today, fossil fuel producers and their supporters continue to fight to increase production, knowing that their economic model is incompatible with the survival of humanity,” Guterres said in Davos.