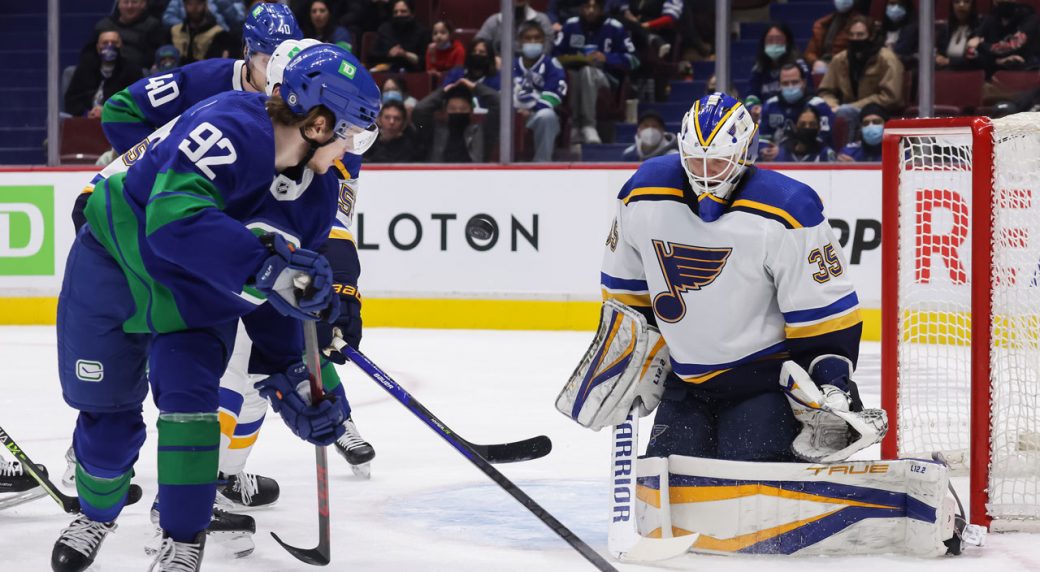 VANCOUVER – Justin Faulk had a goal and an assist and the St. Louis Blues overcame the underpowered Vancouver Canucks on their way to a 3-1 win on Sunday.

Brayden Shannon and Jordan Cairo also scored for the Blues (25-11-5) on the power play of the second period, while Vladimir Tarasenko recorded a pair of assists.

Tanner was the only target for the Canucks (18-19-4), who have six players and two assistant coaches in the NHL’s COVID-19 protocol.

St. Louis got a brilliant goal from Ville Husso, who blocked 39 of 38 shots and saved .963 in his last five games.

Michael DiPietro made 14 saves at the start of his season for Vancouver, becoming the fourth goalkeeper to play for the team this season.

Arters Silovs of the AHL’s Abbotsford Canucks has also tested positive for the virus, forcing Vancouver to sign an amateur tryout deal on University of BC goalkeeper Rylan Toth so he can act as DiPietro’s backup.

Down 3-1 with less than 90 seconds on the game’s clock, the Canucks pulled DiPietro in favor of an extra attacker.

Tarasenko almost saw an empty-net strike, but was swamped by a trio of Canucks intent on not dropping another goal.

Kyrou extended the St. Louis lead to 16:43 in the second period, sending a rocket of a shot through traffic. The puck appeared to ping the shaft of DiPietro’s stick and inside.

Both Falk and Tarasenko assisted in the play. Tarasenko has scored in his last nine matches with six goals and nine assists.

He also included in a power-play goal that lifted the Blues 2–1 in the second period after the Canucks called for too many men.

Tarasenko cuts a pass to Shane, who was stationed at the back door. Shane poked it for his ninth goal of the year.

St. Louis were 1 for 3 in the power play on Sunday, while Vancouver went scoreless on four occasions with a Man Advantage.

Faulk drew St. Louis before the first interval. Oskar Sundqvist blasted a pass to Faulk in the front of the net and the defenseman deflected it between his legs, sending the puck into the crossbar and at the 18:33 mark.

The Two Blues stepped out of the box when the Canucks fired the first goal of the game at 16:30 in the first period.

Vancouver’s Matthew Highmore became embroiled in the St. Louis area with both Ivan Barbashev and Torrey Krug. Barbashev was called in for the roughing and Krug was called in to remove Highmore’s helmet.

Vancouver managed five shots on the ensuing five-on-three power play, but Husso shooed them all away. As the penalty ended, Pearson picked up Alex Chiasson’s rebound to the side of the net and hit it over the goalkeeper.

Elias Petersen recorded an assist in the play, marking the 100th point of his NHL career.

Hired by Vancouver on December 5, the 67-year-old former NHL center has worked behind the bench for the Washington Capitals, Anaheim Ducks and Minnesota Wild. In 2008, he won the Jack Adams Award as the league’s top coach after guiding the Floundering Caps through a bounce-back campaign.

Boudreau’s wife Crystal and their two children were in the crowd on Sunday as the milestone was marked with a video tribute before the puck drop. Many of the coach’s former players, including Marcus Foligno, Alex Ovechkin and Kevin Bexa, and colleagues such as Stan Bowman sent congratulatory messages. Boudreu appeared emotional on the bench.

The Blues are set to go up in flames in Calgary on Monday. The Canucks wrap up a three-game homestand when they host the Oilers on Tuesday.

Notes: Pavel Buknevich did not travel to Vancouver with his Blues teammates. The left-winger was returned from COVID protocol to play in St. Louis’ 5-0 win over Kraken in Seattle on Friday but could not cross the border into Canada as he tested positive for the virus in the past 10 days Was. , Sunday marked the first time both teams have played since January 27, 2020, when the Canucks beat the Blues 3-1 in Vancouver.

Politics with Michelle Grattan: Liberal Dave Sharma on the 2030 Goal