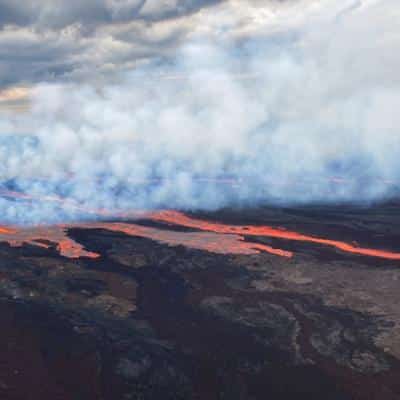 the animal woke up

Despite being one of the most closely monitored volcanoes on Earth, Mauna Loa has yet to reveal most of its secrets. While there have been some general patterns, each eruption has been unique.

There was an eruption in 1859 that lasted for 300 days and produced a stunning 51 kilometer long flow; Destroyed cities and vital resources. About 91 years later an eruption occurred that lasted only 23 days, but spewed 375 million cubic meters of lava onto the Big Island of Hawaii and destroyed some of the island’s infrastructure.

The most recent eruption before the present, in 1984, nearly swallowed Hilo — a scenario officials have tried unsuccessfully to stop in the past by using explosives to divert lava flows from Mauna Loa.

Since 2019, there has been a lot of activity at Mauna Loa, Changes in its shape and tremors have suggested that magma was churning inside. Last September, the upheaval became even more pronounced, leading researchers to suspect that magma was moving toward a summit reservoir. Soon, members of the Hawaiian Civil Defense team met to prepare residents for a possible emergency scenario.

Shortly before the magma broke out on the surface, the volcano began to tremble violently on 27 November. “There was high seismicity for about an hour as the magma moved from the summit storage area to erupt. That was the only warning we had,” Stovall says.

Why has it taken nearly four decades for it to erupt again, and why is it now? To answer the questions, researchers will need to continue studying the eruption and its aftermath. It is clear that something has changed inside the volcano, but, for now, the trigger is uncertain. “At some point, things fail,” says Diana Roman, a geophysicist at the Carnegie Institution for Science in Washington, DC.

In the case of Mauna Loa, the absence of warning signs in the days before the eruption was not surprising. Nor did the onset of flare-ups, which occurred at the peak and were harmless. But personnel at the Hawaiian Volcano Observatory flying over the volcano saw lava erupting from its northern flank at dawn on Monday, November 28. Now it remains only to watch and see how the situation develops.

no imminent danger yet

As previous Mauna Loa paroxysms have shown, it is difficult to know how an eruption might develop. Explosive activity at the summit, which could produce short-lived ash plumes, is possible but unlikely during this eruption. The main danger is lava flows from the side of the volcano.And the fact that they become destructive depends on how abundant and persistent they are.

Lava could cut off the Saddle Highway, which runs through the island, and could endanger parts of the nearby Mauna Loa Observatory. If this happens, it will cause many inconveniences, but it is far from the most disastrous possibilities.

The continued threat to life and property shouldn’t be ruled out, according to Stovall, but the volcanoes are “relieved, especially since the current worst-case scenario isn’t over.”

In the meantime, the USGS and its partners will continue to monitor the volcano around the clock, and as soon as possible, scientists will work in the field to sample the lava and see how its composition (and the potential for catastrophic eruptions) changes over time. Is. As the rash develops.

So far, Stovall says, Mauna Loa is “doing well.” “We hope it stays like this. This is just the beginning,” he warned.