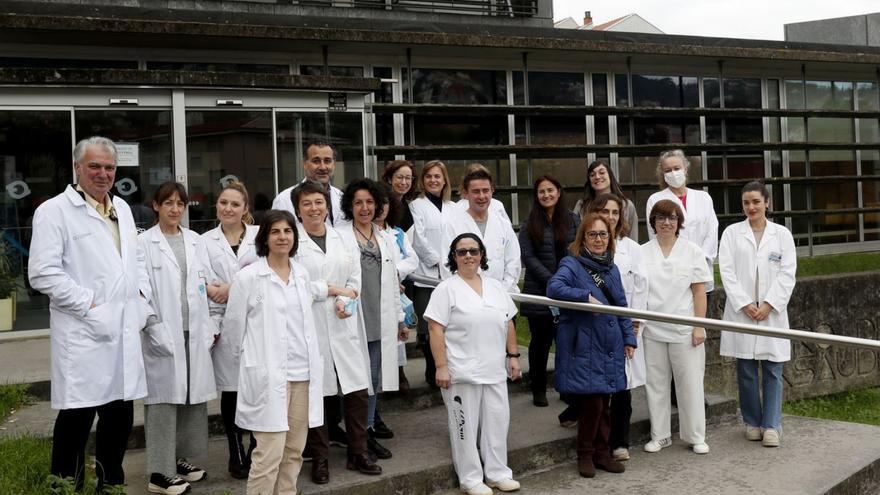 More and more primary care centers in the Vigo health area have local health plans, roadmaps with protocols to improve daily life for both health professionals and patient care. Thus, Lavadores and Sardoma, which initiated the signing of the document with Sergas several months ago, are now joined by Tees, Pintor Colmeiro, Porrino and Cangas outpatient clinics. is one of the main protocols Unify the appointments of polypathological patientsIn other words, if a person visits a health center for a throat problem and also needs monitoring of his chronic illness, the family doctor will bundle all the tests together so that the patient can get all the tests done on the same day and He doesn’t need to. come on different occasions. “For example, an analysis can be done first thing in the morning and then an electrocardiogram,” explains Luis López, head of service at Tice Health Center. “That way they’ll feel better cared for. And in the consultation they are clearly given the prescriptions they need and the lifestyle habits or advice they need about their disease.”

Professionals are aware that this will take longer and may delay schedules, but in the long term it will be beneficial as it will reduce the number of patients seen daily, a figure that currently accounts for a large part of the country. is intolerable. Doctor in Vigo’s family.

Coordination arrangements for this new appointment Nursing staff will play a fundamental role, as the protocol states that they may care for patients who come to the health center with constipation or urinary infections who do not have warning symptoms. “The objective is to free the family doctor and to create an agenda that is adequate proportion among all,” explains Ángeles Charle, head of the Porrino health center. It is probably in Porrino where the health plan is more complicated to implement, as it is divided into services of three municipalities (Mos, Salseda and Porrino)., “We have to put the gear together well so that everything works properly,” says Charlie.

Clinics will take more into account the opinion of the users

In addition to improving the day-to-day management of outpatient clinics, physicians highlight that one of the positive aspects included in health plans is the focus on other promote the improvement of the health of the population, Involve the patient in care, work with the center’s team, interact with the sick and thereby make an impact on improving community health. In Porrino, Salceda and Moss, meetings will also be held with the town halls to find formulas to improve the health of the population.

Professionals, however, accept First they have to try to comply with the health plan as they have to do an assessment to measure their well being, because “we’re a little overwhelmed right now,” says Luis López from Tice Health Center. “Every quarter we will evaluate the objectives and we must improve the contact as professionals, more as a team. From now on we will also have to justify with data the requests we make in terms of personnel, material I do with public administration … ”, explains the head of the Teis service.

Workers at the entrance to the Porrino Health Center. JL

Kangas, Porrino, Teis and Pintor Colmeiro have recently signed with Sargas, along with new fitness plans, also looking to Take users’ opinions more into account in the daily operation of the health centerFor example, studying population surveys and registered claims.

After the signing of health plans with health centers, Health Minister Julio García Comésana remarked that these documents They provide greater capacity to outpatient clinics, boost the statistics of heads of services and coordinators, and manage human resources locally., They also provide comprehensive person-centered care. In addition, they demand shared leadership among them, allowing greater equity, access and closeness in patient treatment, as well as better organization of professionals’ agendas. “The aim is Improving the quality of patient care and reducing the incidence of the most prevalent morbidities in each municipalityand also weave collaboration networks between each health center and its environment for the benefit of the health of the population”, Komesana explained.

Sardoma and Lavadores were the first two clinics in the Vigo health area to have a local health plan. After the first months of implementation, the Ministry of Health considered the scores obtained in various aspects of the objectives achieved by the new primary care model.

Thus, in one of the 14 Galician health centers Sardoma was about to receive Recognition of Training, Teaching and ResearchTaking into account the number of teaching professionals as well as the number of meetings, clinical sessions and internal training activities and participation and development of research projects 8.03 out of 10,

Therefore, two centers have already been formed A reference for the whole of Galicia.