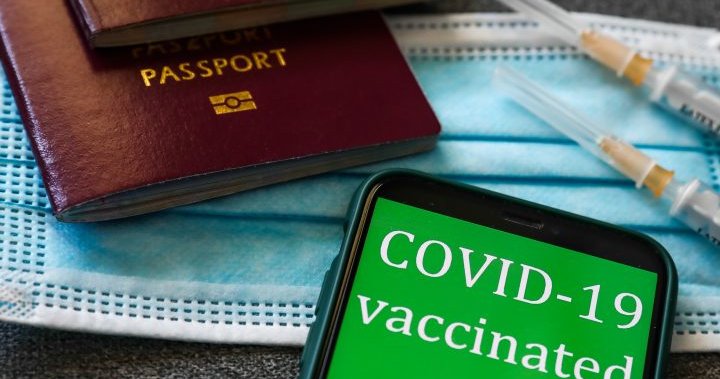 Premier Jason Kenney says he’s confident that Alberta’s COVID-19 restrictions could be eased by the end of March and that may include the removal of the province’s Restrictions Exemption Program. But while some health officials are cautiously hopeful, others say it’s too soon to put a timeline on any such decisions.

The premier made the comments Thursday, as Alberta hit yet another all-time high when it comes to the number of people in hospital with COVID-19 at 1,469. On Friday, hospitalizations increased once again to 1,496. (See Friday’s full COVID-19 data below).

“I’m one of the people that wants to see an end to the Restrictions Exemption Program and as quickly as possible,” the premier said Thursday.

However, Kenney also stressed that now is not the time to ease restrictions, not hospitalizations in Alberta are at the highest they’ve been throughout the entire COVID-19 pandemic.

2:38
Kenny confident COVID-19 restrictions will be eased by the end of March

“I very much hope that we can move towards widespread relaxation of public health measures, including the proof of vaccination program, in the foreseeable future once we start to see the pressure on hospitals trend down,” the premier said.

Kenney said last week it appears the number of new cases of COVID-19 has peaked in Alberta, but said hospitalizations will continue to rise into the end of January.

He said the decision to ease public health measures will be based on data, as well as evidence from other jurisdictions that hit the Omicron wave earlier than Alberta.

“I’m pretty confident it will come in before the end of March, and I hope it comes,” Kenney said. “I’ll tell you this: we will eliminate the Restrictions Exemption Program as soon as it is safe to do so.

“Let’s just, after a couple of years of this thing, just keep our eye on the ball, have the backs of the people in our hospitals. Let’s not start removing measures that could trip us back into higher transmission, hospitalizations when the hospitals are already under so much pressure.”

But how realistic is that March target?

Dr. Nazeem Muhajarine is an epidemiologist and professor in community health and epidemiology at the University of Saskatchewan. He believes it’s too early to be talking about timelines when it comes to easing restrictions in Alberta.

“To be musing this far ahead, this early in this fifth wave — I could imagine that is to give something to look forward to for people, something they could be hopeful about, which is fine — but at the same time though, it could also backfire. It could also be sending a message that the danger has lifted,” Muhajarine said.

“I don’t think that it really has lifted yet, certainly not in Saskatchewan, not in Alberta.”

Muhajarine pointed to the recent emergence in Canada of the BA.2 subvariant of Omicron, which is spreading quite rapidly in Denmark and the UK

“If BA.2 were to spread, it will prolong, it will extend our winter wave here of Omicron,” he said. “No one really saw Omicron coming until it came, and it came with a vengeance as we all know looking back.”

Muhajarine said officials should be careful in their messaging, so as to not give people false hope.

“What we should be saying is get your booster doses. And if you don’t have your primary doses, now is past due and get your vaccine doses right away, minimize your interactions, hunker down a bit during these winter months, weeks, so that we will see that this storm of Omicron passes us and we will come out the other end.”

When it comes to mandatory vaccine policies, Muhajarine also points to the important incentive they provide.

“One important purpose of that policy is to get people who are still hesitating to get a vaccine, to get vaccinated,” he explained.

“Alberta and Saskatchewan, compared to the other Canadian provinces, have low uptake for second doses and so we need to really keep that proof of vaccination policy intact for a little bit longer. It’s not forever, it will need to be lifted at the appropriate time.”

Muhajarine believes we are closer to an endemic stage of COVID-19 than we have ever been before, but said he’ll keep doing what he’s been doing for a little while longer.

“I’m going to wait out this storm of Omicron until I start to get together with friends and family outside of my home.”

Omicron and living with COVID: Why the new variant might change the timeline

Dr. Caroline Colijn is a professor and infectious disease modeller at Simon Fraser University in Vancouver.

She said there are many factors to consider, but according to modeling projections, she believes Canada will be in a “pretty strong position” by the end of March.

“That’s assuming that our immunity that we have from vaccination, from boosters and especially from Omicron infection is really strong against re-infection from Omicron or new lineages,” Colijn warned.

Right now, Colijn said the risk of infection remains high. However, modeling is suggesting infections have peaked in most parts of the country.

“We do think that wave is now receding and it is the first, sort of, wave that we have had that has gone through our population and actually infected so many people that that immunity has built up that way. With previous waves, we’ve always turned them around basically with social distancing measures,” she said.

She said if the immunity against severe disease offers a high level of protection, it paints a “fairly optimistic picture” in terms of the immunity in Canada by the end of March.

“This is the first time that we’ve really seen such massive levels of infection in Canada and hopefully by the end of March it will put us in that strong position.”

May take ‘a couple of years’ for COVID-19 to reach ‘low, endemic rates’ in Ontario: top doctor

Dr. Dale Kalina, an infectious disease physician at Joseph Brant Hospital in Burlington, Ont., said while March might be “a little bit aggressive” to ease measures, he’s also appreciative of the fact that it’s been a really tough two years.

“The plan to lift restrictions is hot on everyone’s mind,” he said.

“I would just hope, as well, that it is reflective of cases that we are seeing in Alberta if fewer restrictions are in place. Because we’ve seen in the past, unfortunately, that restrictions have been lifted too quickly in Alberta and with that leads to overwhelming the health-care system, a lot of people being sick and a lot more people dying than need to.”

Kalina warned there is still uncertainty around what type of long-term immunity might be provided through natural infection.

“The reality is you do get more immunity from being vaccinated. And against Omicron, we’ve seen that three doses of vaccine is far better than two,” he said.

“Having a natural infection doesn’t preclude you from coming back into the hospital again or having the disease again. I’ve seen it in my hospital, I’ve seen it across the country.”

The health professionals agree that declining case counts, hospitalizations and deaths are all metrics to consider when lifting restrictions. So too are things like wastewater data, the availability of hospital capacity, as well as understanding the virus, how it evolves and what other variants may emerge.

In September, the premier admitted the province was wrong to lift the majority of public health measures in July. He said at the time, the decision was based on analysis from other jurisdictions around the world with similar vaccination rates.

“We were wrong. For that, I apologize,” he said on Sept. 15, as the province was heading toward the peak of the fourth wave, driven largely by the Delta variant of COVID-19.

0:54
‘We were wrong’: Jason Kenney apologizes for move to COVID-19 endemic ahead of 4th wave

Canada’s top doctor said Friday several indicators now suggest the Omicron wave of COVID-19 has peaked in Canada, but Dr. Theresa Tam wasn’t ready to say whether the worst is behind us.

Tam said she is “cautiously optimistic” but it’s too early to say what the months ahead will hold as officials await the results of studies to show whether immunity levels remain high in populations after the Omicron wave.

Ontario’s top doctor also said earlier this week he is hopeful the risk of COVID-19 poses to those in that province will be lower in March and April.

There are now 41,300 lab-confirmed active cases in Alberta. However, because of limited access to PCR testing, provincial health officials have said the number of new and active cases of COVID-19 in Alberta are actually much higher.

Why do frozen turkeys explode when deep-fried?