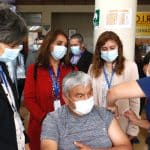 As part of his visit to the Los Lagos region, Health Minister Ximena Aguilera visited the Cesfam Varus Varus vaccination center located in the Puerto Montt commune, where the minister urged the introduction of a bivalent vaccine against SARS aimed at the population. -CoV-2 and maintaining prevention measures.

“We want to take advantage of this time to make a very strong call for people to get vaccinated, despite the fact that we have had a slight increase in cases, we have not had a large number of serious cases, but that is okay. Vaccination is due and people have to go for vaccination,” said the country’s highest health authority.

Along these lines, Minister Aguilera said that during her visit, she reviewed the vaccination data of hospital officials and said that this figure is low in the region, which is why she asked “health officials to get the bivalent vaccine.” asked to be taken.

On the other hand, the head of health highlighted the elderly population, who “have been very, very obedient in the sense of following the signals of the health authorities and this has allowed the impact of this disease to be reduced. So follow their example”. Do it.”

During the activity, the Secretary of State affirmed that “the pandemic is not over and we have to learn to live with this virus”, and recalled that last October the country moved to an early stage, where “we have seen how, There have been waves of cases since then, but fortunately, thanks to vaccination and the precautions people take, it hasn’t contained a strain on hospitals and hasn’t caused a drastic increase in bed utilization, which is particularly Interesting for us. ”.

“It is very important that given what is happening in the Northern Hemisphere, and especially in China, we have decided to expand the health alert so that all tools are at hand, for example, changing the phase in which We are, something that for now we do not see”, added the head of health.

At the local level, Minister Aguilera assured that “we are working with Ceremi to accelerate the vaccination work and likewise, together with the director of the Reloncaví Health Service, we are all very concerned that we can effectively prevent any Can get time to prepare for the event. It happens with pandemics”.