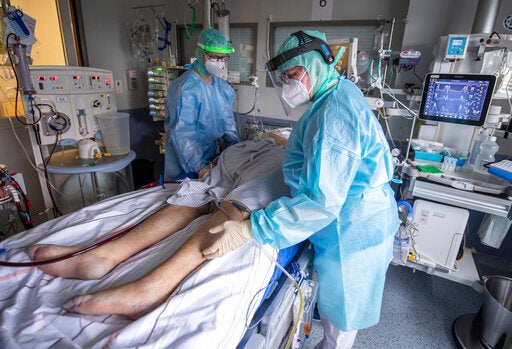 BERLIN ( Associated Press) — Germany has crossed over the peak of new daily infections with the omicron variant of COVID-19, the country’s health minister said on Friday.

Health Minister Karl Lauterbach said government measures to curb infection numbers have been effective, but he warned against relaxing the public health rules too hastily.

“We are not really in safe waters,” he told reporters in Berlin.

Lauterbach, an epidemiologist by training, noted that as many as 12% of people over age 60 in Germany are still unvaccinated. That share is three to four times higher than that of unvaccinated, vulnerable population groups in comparable countries.

Germany has been slower than many of its neighbors to relax pandemic restrictions. Chancellor Olaf Scholz and the country’s 16 state governors agreed Wednesday on a three-step plan to end most of the country’s COVID-19 rules by March 20.

A nurses takes care for a patient with severe COVID-19 disease in the coronavirus intensive care unit at the hospital in Fulda, Germany, Wednesday, Feb. 16, 2022. (Boris Roessler/dpa via Associated Press)

Karl Lauterbach, Federal Minister of Health, answers questions from journalists at a press conference on the incidence of infection and the development of vaccination in Berlin, Germany, Friday, Feb. 18, 2022. Germany’s health minister says he thinks the country has passed a peak in new daily coronavirus cases involving the omicron variant. (Wolfgang Kumm/dpa via Associated Press)

Lauterbach defended the cautious approach, saying that “if we open too quickly, then the case numbers will rise again.”

He also said a general vaccine mandate was still necessary, noting that new or existing variants of the virus could lead to a fresh wave of infections in the fall that could put a severe strain on the health system.

Lauterbach urged opposition lawmakers not to block compulsory vaccination proposals over party politicking. Parliament is expected to hold a free vote on the issue, but the opposition Union bloc has increasingly moved away from backing the idea in recent weeks.

The Robert Koch Institute said almost a quarter of Germany’s entire population – nearly 20 million people – has not been vaccinated. The figure includes about 4 million children under age 5 for whom COVID-19 vaccines have not yet been authorized, the institute said.

Germany announced Friday that it was taking almost 20 countries off its list of high-risk areas, including Britain, India, Spain and the United States. The move will make it easier for some travelers coming from those countries to enter Germany.

Previously, people who weren’t deemed to be fully vaccinated had to quarantine for at least five days upon arrival.