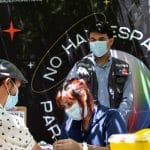 Starting today, men who have sex with men between the ages of 18 and 44 can be vaccinated.

The Undersecretary of Public Health, Cristóbal Cuadrado, RM Health Ceremi, together with Gonzalo Soto, AHF participated in the vaccination campaign against monkeypox (mpox) carried out by the Ministry of Health in Chile and announced the inclusion of a new priority group. In the pre-risk stage.

“I want to announce today that we continue to move forward by including new groups who are more exposed to the virus. Specifically, we include all men who are between the ages of 18 and 44. have sex with, whom we invite to vaccinate against monkeypox to prevent them from developing the disease. We have vaccination in all regions of the country”, explained Cristóbal Cuadrado, undersecretary of public health.

Thus, as of January 17, all men between the ages of 18 and 44 who have sex with men can be vaccinated against monkeypox.

These people have already joined the priority groups: contacts of positive cases; people living with HIV who are between the ages of 18 and 44 or who are living with HIV and are immunocompromised; workers and sex workers; PrEP users and gay, bisexual, trans, and men who have sex with men with a history of sexually transmitted infections in the past month or who engage in risky behavior.

Since the inception of the global alert, the Ministry of Health has been working to prevent monkeypox, now also known as Mpox, from spreading in our country. “Since the start of the outbreak, last year, we have deployed a number of actions to strengthen our surveillance, clinical capacity, community education and work with social organisations. Since October of last year We have launched a satisfactory vaccination campaign focused on the most at-risk groups”, said Undersecretary Cuadrado.

The target groups are gradually expanding and 4,219 vaccines have been administered so far. Of these, 510 correspond to the second dose.

“It is very important to remember that in the metropolitan area we have 4 points where people can reach and have access to vaccinations: San Juan de Dios, Sotero del Rio, San Jose and San Borja Arriaron hospitals, and progress is also being made expansion of new establishments. The call is to move closer to those places”, explained Seremi de Salud RM, Gonzalo Soto.

This is the second time that Minisal in AHF Chile Foundation has conducted a vaccination campaign and is coordinating with other social organizations to go for vaccination in the context of a strategy to increase access to vaccination to priority groups.

Krishna Motello, Manager of Prevention and Rapid Tests, AHF Chile Foundation, thanked the operation and said: “Many thanks to the Ministry of Health for trusting social organizations like AHF Chile, vaccination against monkeypox is the point. It is important to consider that the communities to which Monkeypox is directed are part of the population that has been socially violated and that need the immunological boost provided by these vaccines. These two doses are administered by our organization in a reliable and friendly manner. The value that the Ministry of Health holds when considering a position where diversity is respected is fundamental.