Health officials caution about alcohol use, burnout and mental health in end-of-the-year celebrations 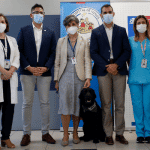 Two days before the end-of-year celebrations, health ministry officials called for prevention to avoid accidents and health problems that lead to emergency consultations.

The Minister of Health, Ximena Aguilera, and the Undersecretary of Public Health, Cristóbal Cuadrado, and Assistance Networks, Fernando Arros, did so as a setting of recommendations to the Exaquiel González Cortes Children’s Hospital (HEGC) in Santiago. He was accompanied on the occasion by Daniel Ruiz, director of the South Metropolitan Health Service, Ines Arneda, director of HEGC, and Francisca Salazar, in charge of the hospital’s chemotherapy program, and Jorge Rojas, founder of Canikin.

At the hospital, he visited the emergency department, where he spoke to mothers and caregivers of pediatric patients. Along with this, felicitated and expressed gratitude to the officers working there. Within the framework of Zero Copay the Secretary of State declared, “It is a source of great pleasure, as health authorities, to see that this economic guarantee can be given in this hospital, which has conditions that are completely There are adequate and dignified care of boys and girls.

He added that the care center has all the conditions to meet possible cases of fireworks burns and other needs of the child population. “We have seen over the years that since the law banning the domestic use of firecrackers was enacted, the strict control over their use has been relaxed a bit and we want to call on families not to buy fireworks. They are an effective risk to children’s health, they cause irritation, especially in those who handle it. We had reduced the loss a lot, but we have seen it happening again because of this clandestine sale of firecrackers.

Minister Aguilera also pointed to the responsible consumption of alcohol at celebrations. “The first message to the population is that we try to have a healthy end of the year in which we do not have excessive risks such as manipulation of crackers. And to give a message about alcohol consumption, the effects of alcohol In order not to drive in, to try to have parties in which we have a good time, to avoid quarrels, sometimes there are also discussions when the weekend is of parties of the year and excessive alcohol consumption”.

For his part, Cristóbal Cuadrado, the Undersecretary of Public Health, addressed the needs and care that may be taken with children with autism spectrum disorder (ASD) as a result of the potential use of fireworks.

Cuadrado indicated that boys and girls should anticipate that these events of noise and bright light may occur so that they can be prepared and not be taken by surprise.

“We urge caregivers of TEA children to take measures in anticipation of possible fireworks. It seems important to us that fireworks are going to be held if we know there are going to be fireworks in the city, or where children with ASD live. we can create a space that is our own, containing some important personal item that we can use. Help give it some control. We can also use headphones, hearing protectors, earplugs or other that can help block out the noise”, he suggested.

Furthermore, the Under Secretary for Public Health stressed that although these dates are for celebration “it can also be a period of anguish, loneliness for some people who are going through difficult times, so it is so important to remember that suicide is something we can prevent.”

“We would like to invite you to observe, ask and join on these dates; First look in groups in your family, friends, or work where they may be showing disinterest or frustration, and if this conversation occurs, take it very seriously, because it is a matter in which it is always better to say nothing. Say something instead”, he concluded.

The Salud Responde telephone number 600 360 7777 said the authority will be available 24 hours a day on December 31 and January 1 to welcome, guide and refer community inquiries nationwide.

In this sequence, the Under Secretary of Assistance Networks, Fernando Arros, announced that “the assistance networks from Arica to Magallanes and all devices nationally are 100% operational for the year-end holidays and will be available and available if they are needed”. It is essential with all emergency services to be able to respond to various contingencies. Citizens are invited to celebrate these days responsibly, avoiding behaviors that put our lives and those around us at risk. Let’s put in

Aros investigates the damage caused by firecrackers. “They cause very complex damage, especially in children and adolescents, where they can cause scars, not only life-threatening injuries, but also scars that require multiple surgeries and long-term follow-up.” . For this reason, to avoid sequels, please do not use fireworks”, concluded the Under Secretary of Assistance Networks.

Jorge Rojas, founder of Koanichem, pointed out that “Historically New Year’s has been the most dangerous date for children in terms of risk of burns from fireworks. In practice, about 70% of burns in recent years have occurred on the night of the 31st, the first It’s a January morning, and we have a golden opportunity to try to reverse the trend.

The founder of Coaniquem regretted that two 11-year-old children were injured by fireworks in different parts of the country this New Year’s Eve.

In this context, health care for boys and girls, the presence of Moron, a HEGC cannotherapy dog, whose manager and doctor at the care center, Fernanda Romero, warned about the effects of the fire, was highlighted at the press conference . in domestic animals. He indicated that to protect them, the person closest to the animal can contain it by giving it a safe, quiet physical space and using ear plugs, among other measures.