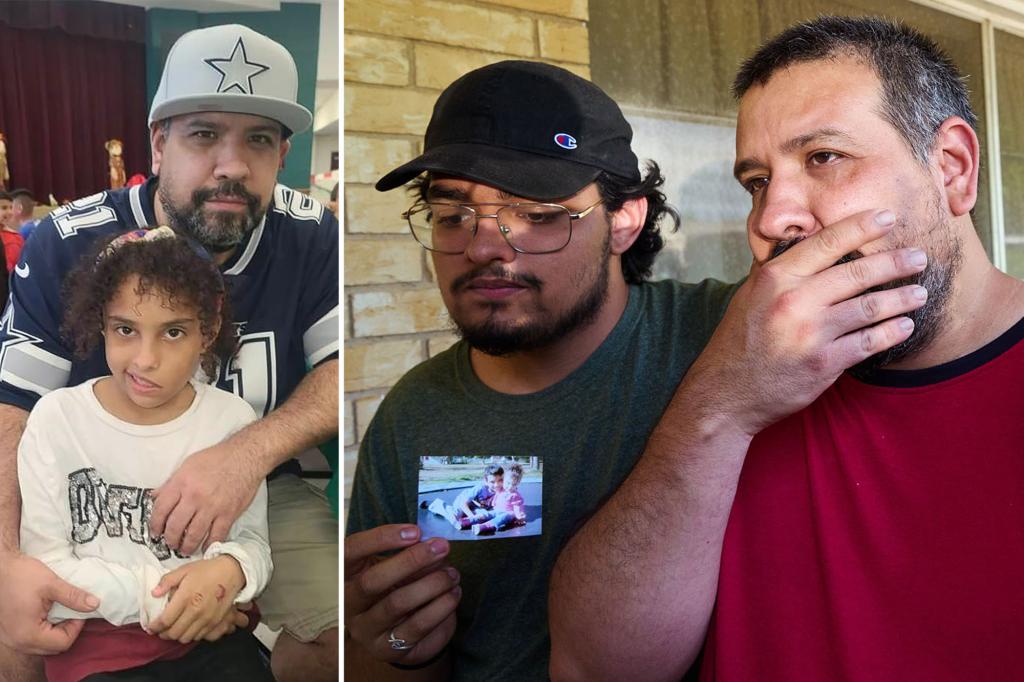 Vincent Salazar sat in a room with dozens of other families at the Uvalde, Texas civic center Tuesday afternoon, waiting to pick up his 10-year-old Layla after learning a gunman barricaded himself inside two adjoining classrooms at Robb Elementary and began shooting, he told The Post.

“When all the buses came, everybody had picked up their children. The families who got their kids left and you were still there. That’s how you knew,” said Salazar. “I could see it on the highway patrol, the trooper’s faces when I got there.”

“We were told that nobody was hurt. We weren’t able to get internet while we were in there. I didn’t know how bad it was. We had no idea. They give you false hope. They tell you what you want to hear until the point that they have to tell you.”

That’s how Salazar learned his Layla, the baby of the family, was dead. The heartbroken father said his daughter loved to wear denim jackets, make TikTok videos, was well-mannered and sassy.

Salazar held back tears while talking about how he and she would listen to “Sweet Child of Mine” everyday on their way to school in the morning.

“I just put it on one day and she loved it; she kept singing it,” he said through tears.

The little girl’s father didn’t want to talk about the shooter or the most recent revelations about the timeline of events the day of the shooting and how it took the police nearly one hour to respond.

“Forty minutes… we’re lucky that more children weren’t lost with that amount of time that he was there,” Salazar told The Post on Thursday. “I don’t want to think about how scared she was because you start going down that road…”

For now, his family is just focusing on getting her body back from investigators so she can be laid to rest.

The latest from the Texas school shooting

“We just want her back. [The funeral home] told us we don’t have to pay and they can customize the casket for you. whatever we want,” the father said.

Layla’s mother, who did everything with the fourth-grader, is barely holding on.

“She can’t handle it right now, she doesn’t want to speak to anyone. Layla would sleep with her. They would even get their nails done together,” Layla’s older brother Julian said.

Salazar said he rejects the idea that school shootings are a mental health issue, as Texas Governor Greg Abbott suggested at a press conference he held one day after 19 kids were gunned down with an AR-15 rifle the gunman legally purchased.

Read Also:  Mexico: Morena bets on consolidating itself in elections

“Our number one job as parents to protect our children. Our lawmakers aren’t doing a good job. It’s time to look at the gun laws that we have. I’m not pro-gun; I’m not anti-gun. We need to look at the age…he was 18 years old. You don’t need those types of rifles at 18. What are you going to do with them? We hunt out here. That’s not what we use.”

“I know changing law isn’t going to stop every tragedy from happening, but we can’t just sit back and do nothing.”

When President Joe Biden travels to Uvalde on Sunday, Salazar says he will speak to him about what changes he believes need to be made.

“Joe Biden is not the king. He can’t do everything by himself,” said Salazar. “He needs the support of Congress. The way to affect change is to vote. If the elected officials we have aren’t doing it, then we need to elect officials who will.”

Leaving Airtel behind, this company is offering Unlimited Data for just Rs.