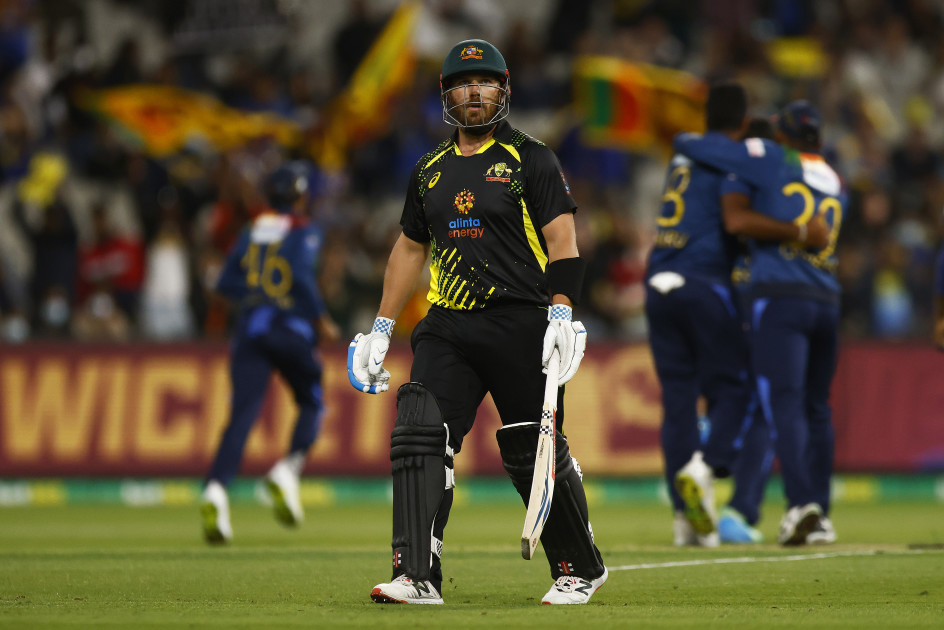 Aaron Finch hasn’t been at his best in the five-game T20I series against Sri Lanka.

Australia’s skipper led his side to a 4-1 series victory, despite a surprise defeat on Sunday night as Sri Lanka managed the nine runs required to win off the final over at the MCG.

The series result is far from unexpected, and while Finch will be thrilled the team is tuned up for the T20 World Cup later this year, concerns remain over his own form.

Another cheap dismissal on Sunday meant the 35-year-old averaged just 15.6 over the five-match series, his second lowest in a two-country series where he has batted more than three times.

When teammate Matthew Wade – who made an impressive 43 runs off 27 balls on Sunday night – was asked about Finch, he took solace from a similar scenario only a few months ago.

“It feels like these questions have come before the last World Cup and after the first couple of games about David (Warner),” Wade said in a post-match press conference.

“Everyone had their say about Davey and he got player of the tournament in the World Cup.”

Warner was under plenty of pressure entering last year’s World Cup, being dropped by his IPL franchise before failing in consecutive warm-up games in national colours.

However, former coach Justin Langer stood by his star as he returned to form, and as Wade notes, he won the Player of the Tournament award.

The wicketkeeper-batsman is expecting Finch to bounce back in similar fashion.

“The questions are always going to come when you get a little bit older and you don’t do well in one series. But they (Finch and Warner) are class players for a reason and the best we’ve had in T20 cricket ever.

“I don’t expect any change at the top of the order to be honest. Those two will be there in the World Cup, I’m confident in that and when the big game comes, they will nail it.

“It’s a position that hasn’t been questioned (much) before and I don’t think there should be questions. Finchy’s a class player, look at his record.”

Finch is undoubtedly Australia’s best ever T20I player, leading the nation in runs scored in the format. He averages 35 runs while striking at over 140.

Wade also backed Ben McDermott for a position in the World Cup XI following his series with the bat.

The opener started hot but couldn’t continue the momentum throughout the series, knocking just 12 runs in his last three innings.

“You’re going to come in and you’re doing to do good in a few games and not so good (at times) when you first come in at this level.

“It’s hard work mentally. He’ll learn a lot – he’s played five games in a row, which he has probably never done before.”

Another World Cup hopeful, Kane Richardson, couldn’t complete the final over on Sunday night, leaving the field with an apparent hamstring injury.

He was also Australia’s best bowler on the night, finishing with figures of 2-28 off 3.4 overs.

Australia will host this year’s T20 World Cup, with the tournament to begin in mid October.