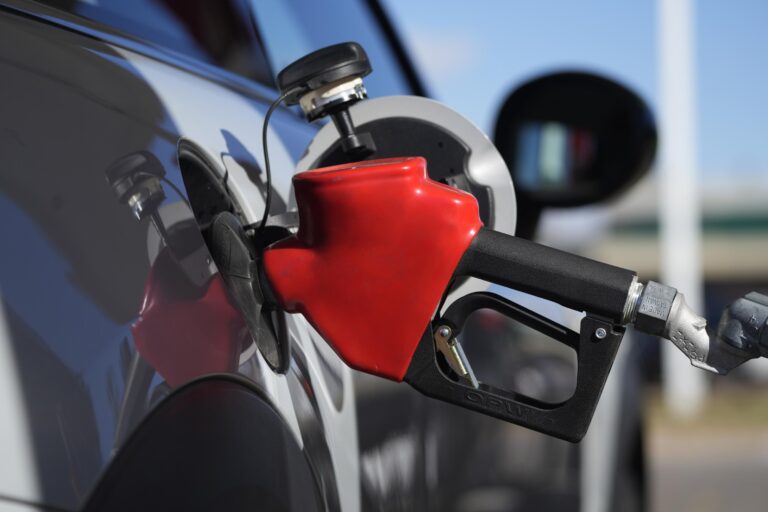 WASHINGTON ( Associated Press) — With the continuing threat of Russia invading Ukraine, a foreign policy crisis is colliding with one of President Joe Biden’s political vulnerabilities: Rising gasoline prices at home.

Americans are already dismayed by Inflation at a 40-year high, and Biden is warning that gas prices could get higher if Russian President Vladimir Putin chooses to invade, It’s a recognition of Biden’s own risks ahead of the 2022 midterm elections: Inflation has become an albatross for Democrats despite the nation’s strong economic growth last year.

“We’re prepared to deploy all the tools and authority at our disposal to provide relief at the gas pump,” the US president declared Tuesday. “We are taking active steps to alleviate the pressure on our own energy markets and offset rising prices.”

The cost of crude oil — and gasoline— began to climb over the past month as Putin massed forces on the Ukrainian border. The diplomatic back-and-forth has whipsawed financial and commodity markets as investors try to price in what an armed conflict and US sanctions against Russia would mean for the global economy.

Even though the broad US economy can absorb higher energy prices, American families have been seeing sharp increases in the price of food, energy and other goods. Forecasts from JPMorgan and other investment firms suggest that crude oil — already at about $95 a barrel — could exceed $125 a barrel due to tight supplies, which an invasion would intensify.

Biden wants to put the focus on how the Ukraine situation is contributing to higher gasoline prices, but costs at the pump already were dramatically higher from a year ago. Efforts to coax more oil production in the US and abroad have largely failed.

Republicans most certainly won’t give Biden a pass due to tensions abroad. Senate Republican leader Mitch McConnell criticizes the president for higher energy and food prices, contending that “the Biden administration seems less interested in trying to solve this problem than in trying to persuade families the pain is just in their heads.”

In a December Associated Press-NORC Center for Public Affairs Research poll, most Americans — 85% — said they’d experienced higher than usual prices for both groceries and gas in recent months. And in an open-ended question about top issues for the government to be working on, 10% named gas prices and energy costs, a sign of the political challenge confronting Biden.

“Given the world that we’re in, any increase in prices of commodities, even if that is transitory, even if the Federal Reserve generally tries to look past obvious supply shocks in making its decisions, it adds to the policy conundrum,” said Gerard DiPippo, a senior fellow at the Center for Strategic and International Studies. “It puts the White House in a bind.”

White House press secretary Jen Psaki said Wednesday that National Security Council Middle East Coordinator Brett McGurk and the State Department’s energy envoy, Amos Hochstein, were in Riyadh on Wednesday to meet with Saudi officials. She would not comment on whether they were pressing the Saudis to pump more oil to help stabilize the global oil market.

Biden did not spell out Tuesday what additional steps his administration would take to reduce oil prices should the situation in Ukraine worsen. In late November he ordered the release of a record 50 million barrels of oil from the US strategic reserve to reduce price pressures.

Gasoline prices did fall in the weeks after the oil was released, though prices have since eclipsed the levels at the time when Biden announced the drawdown. He could order another release if diplomacy fails to cause the Russians to pull back.

Members of Congress are looking for other ways to ease the pain.

Democratic Sens. Mark Kelly of Arizona and Maggie Hassan of New Hampshire — both up for reelection — are already calling for a suspension of the federal gasoline tax. The White House has yet to endorse or rule out this option.

“What people are focusing on is what we can do immediately,” said Michigan Sen. Debbie Stabenow, a Democrat. “People need relief right now, so this is a short-term way to do it.”

Gas prices are up nearly 40% from a year ago and more than 6% over the past month, according to AAA. Suspending the federal tax of 18.4 cents a gallon would not offset the price increases that occurred recently as Russia threatened Ukraine. And there is no guarantee that energy companies would pass all of the savings on to consumers.

It’s also unclear whether there is enough support in the Senate for a gas tax holiday to go forward. Republican Sen. Lisa Murkowski of Alaska equated it to a one-off “sugar high” that could wear off quickly.

“I don’t think that’s the solution here,” Murkowski said. “This doesn’t solve the problem for people paying high prices at the pump. This is a ‘we’re going to stop you from thinking about it by giving you a little bit of an offset here.’”

Adjusted for general inflation, gas prices are not necessarily that high. Average prices were generally higher from 2011 to 2014 during Barack Obama’s presidency and during George W. Bush’s second term, according to the Energy Information Administration.

Jason Furman, a former Obama aide, Harvard University economist and senior fellow at the Peterson Institute for International Economics, said that the US economy is at a point where it can withstand higher oil prices, though pockets of the country could be hurt. High prices would, in fact, lead to more oil-related investments that could cause prices to eventually fall.

Furman said the best choice Biden could make is what he did on Tuesday, warning the American people that prices could rise if war occurs.

“There’s just not a lot that the president can do,” Furman said. “ A certain amount of what the president should do is level with people that these events may drive prices up temporarily and that prices will also come back down.”