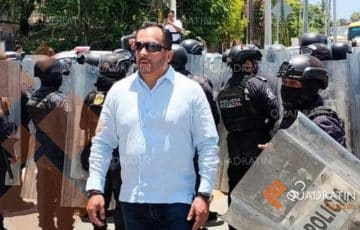 TLAXCALA, Tlax., Jan. 16, 2023.- Ramón Celaya Gamboa has been profiled since November as the new head of the Civil Defense Secretariat (SSC) of the Tlaxcala government, and in January 2023, he announced his decision to find the dependency without leadership. Took office after about three months. ,

Since 2 November, Quadratín Tlaxcala has announced that he is the most suitable profile to take over the SSC, as he is a high-level expert on the subject of security.

Ramón Celaya Gamboa, is a criminal lawyer, a teacher in criminology, an expert in intelligence and verbal tests, and a retired military officer with the rank of lieutenant colonel. He is a professional with 28 years of experience in federal public administration, in the fields of national security and law enforcement, expert in intelligence and security data processes, as well as professor at Universidad Anáhuac del Norte and postgraduate professor at Universidad Iberoamericana Campus Santa Fe.

Celaya Gamboa received a master’s degree in criminology with honors from the University of Anahuac, and a specialty in oral trials and accusative criminal proceedings from the National Institute of Criminology (Inacipe).

Likewise, he also has a diploma from the University of Anahuac in combating the crimes of operations with resources of illegal origin and the financing of terrorism.

He has taken military intelligence courses from the United States Department of Defense at Fort Benning in Georgia and from the Military Intelligence School at the Center for Army and Air Force Studies.

He was also trained in techniques and means of intervention for special operations and urban warfare at the Spanish National Police Corps in Madrid.

He has been professor, speaker and lecturer at the Escuela Superior de Guerra; and is currently a Doctoral Candidate in Public Administration.

He was Deputy Director of Strategic Approaches of the Federal Police; Intelligence Sector Analyst at the Center for Investigation and National Security (CISEN); Intelligence Analyst of the General Staff of the Secretariat of National Defense (Cedena) and Assistant Military Prosecutor to the Attorney General of Military Justice.

Thus, Ramon Celaya Gamboa arrives in Tlaxcala and after 16 months of government becomes the third Secretary of State Security and the fifth person in charge of this unit.