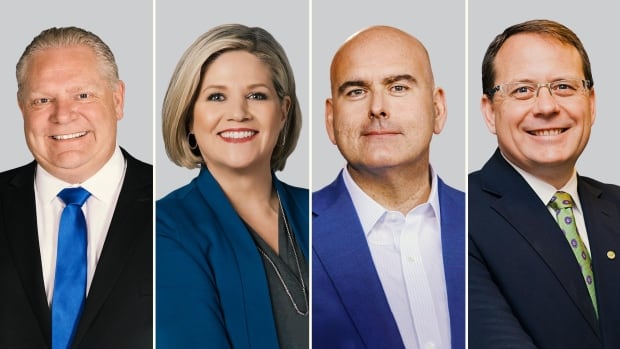 Affordability largely took center stage as Ontario’s political party leaders converged in North Bay for the first of two debates that also included some fiery exchanges on highways and the COVID-19 pandemic.

The debate hosted by the Federation of Northern Ontario Municipalities was ostensibly focused on issues affecting residents in the north but touched on themes that will make a difference in the lives of voters across the province.

Affordability has emerged as far by the number one issue for voters during the early part of the campaign as the cost of living continues to rise across the province.

During exchanges over what they would do to help ease costs for northern Ontarians, Progressive Conservative Leader Doug Ford said the other parties want to tax residents more, something he will never support.

Meanwhile, Liberal Leader Steven Del Duca stressed his commitment to upload (or, have the province pay for) more costs of infrastructure construction and maintenance to help ease the tax burden on northern municipalities.

Leaders campaigning in the north ahead of debate

Ford spent the last several days up north, touting commitments he has made to restore northern passenger rail service, rebuild Highway 101 through Timmins and continue work to build road infrastructure to the Ring of Fire.

The party is also promising to build more affordable housing and bring new addictions supports to the region.

“We’re going to talk to northerners today about the things that matter most to them and I’m very excited about it,” Horwath said.

The NDP traditionally have broad support in the north and held eight seats in the region when the legislature was dissolved, with the incumbent PCs holding a few more and the Liberals hanging onto one.

Del Duca spent the morning releasing northern platform details, which included promises to bolster the region’s population by improving access to medical care, building new roads and taking more control of the immigration system to draw newcomers to the area.

The Liberal platform also includes promises to cover tuition for any medical or nursing student who works long-term in a rural or remote community, expedite applications for Consumption and Treatment Services sites in northern Ontario and ensure high-speed internet for all, including First Nations community, by 2025.

“My focus is not the other three leaders on the stage today,” he said ahead of the debate.

“My focus is the people of Ontario. In particular, given the nature of today’s debate, the people who live in northern Ontario who are facing a severe shortage of health-care workers.”

The promises include a program to generate green jobs in the region, expand access to health-care and mental health services and restore Northlander passenger rail service between Toronto and Cochrane.

WHO: One child dies in mysterious hepatitis outbreak, 17 in need of liver transplant

Honda bumper cashback offer on this sport bike, huge savings can be found