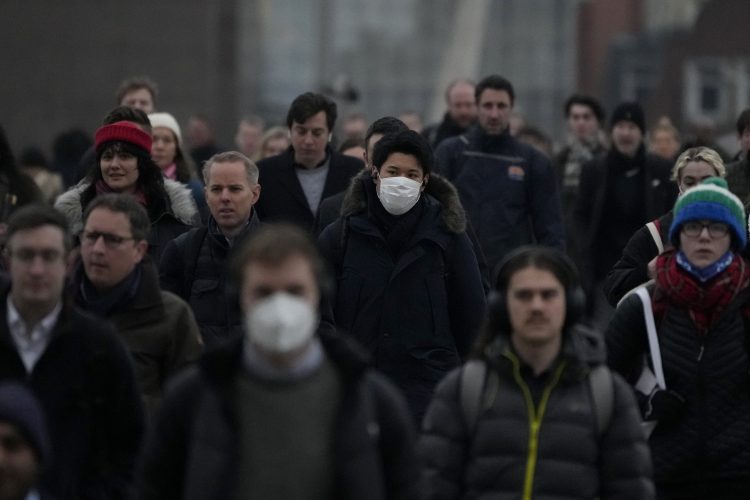 Global health officials are raising hope that the fading of the omicron wave may give way to a new, more manageable phase of the COVID-19 pandemic, even as they warn of difficult weeks ahead and the possibility of another, more dangerous option.

In the US, cases have peaked and are declining rapidly, following a pattern seen in the UK and South Africa, and researchers predict a period of low prevalence in many countries by the end of March. Although the death rate in the United States – now at 2,000 a day – is still rising, the number of new hospitalizations has begun to fall, and a decline in deaths is expected to follow.

Encouraging trends after two years of suffering from the coronavirus have caused notable optimism among health experts. Glorious predictions have been dashed before, but this time they are backed up by what might be called the silver lining of omicron: a highly contagious variant will leave behind an extremely high level of immunity.

On Sunday, Dr. Anthony Fauci spoke on ABC “This week” About “Best Script” where COVID-19 drops to manageable levels so the United States can get “return to a degree of normality”.

And on Monday, the World Health Organization issued a statement calling for the end “emergency phase” pandemic this year and saying that the omicron option “offers a plausible hope for stabilization and normalization.”

Read Also:  The Chicago Bears interviewed Glenn Cook for a CEO job. Here's what you need to know about the Cleveland Browns VP of Player Personnel.

Both Fauci and WHO Regional Director for Europe Dr Hans Kluge have warned that new options are likely to emerge, but with vaccinations, new drugs and — during surges — testing and masks, the world could reach less devastating disease levels. which is a virus, as Fauci put it, “essentially integrated into common respiratory infections that we have learned to live with.”

The places in the US where omicron struck first are seeing the sharpest declines. New cases in the Northeast are plummeting while other states, including Arizona, Texas, Oregon, Kansas and North Dakota, are still waiting for help.

The number of new hospitalizations in the United States of patients with confirmed COVID-19 is also falling. They average about 20,000 a day, according to the Centers for Disease Control and Prevention, down about 7% from the previous week.

These figures include patients who went to the hospital for other reasons and tested positive. But even after accounting for these occasional infections, the trend is encouraging.

One influential model suggests that by mid-March, almost all countries will overcome the micro wave, including China and other countries with “Zero COVID” politicians. The wave will leave behind high levels of immunity – both from infection and vaccination – which could lead to low levels of transmission for many weeks or months.

“What will we get in the end?” said Dr. Christopher Murray of the University of Washington, who developed the Institute for Health Metrics and Evaluation model, which is closely monitored. “We end up with the highest level of global immunity we have seen during the pandemic.”

The model estimates that 57% of the world’s population has already been infected with the virus at least once.

Another research group, which combines several models and shares predictions with the White House, is predicting a strong decline in U.S. infections by April unless a new variant emerges that can bypass rising levels of immunity.

“It would be dangerous to forget about this opportunity, since it has already caught up with us before,” said Catriona Shi of Pennsylvania State University, leader of the model collection team.

“Even if we predict a more optimistic future, right now we still have a lot of COVID spreading, a lot of pressure on our hospital systems, and our mortality peak has not yet been reached,” Lauren Ansel Meyers, director of the University of Texas COVID-19 Simulation Consortium, said.

“Much more pain before the omicron exhausts itself” she said, but added: “It is likely that omicron will be a turning point in our relationship with this virus.”

Keeler: Preach, Shelby Harris! With the Giants, Jets, and Jaguars appearing first, the Broncos will be remembered in September.