How bad was the Jets offensive line in ’21? Not as bad as you might think 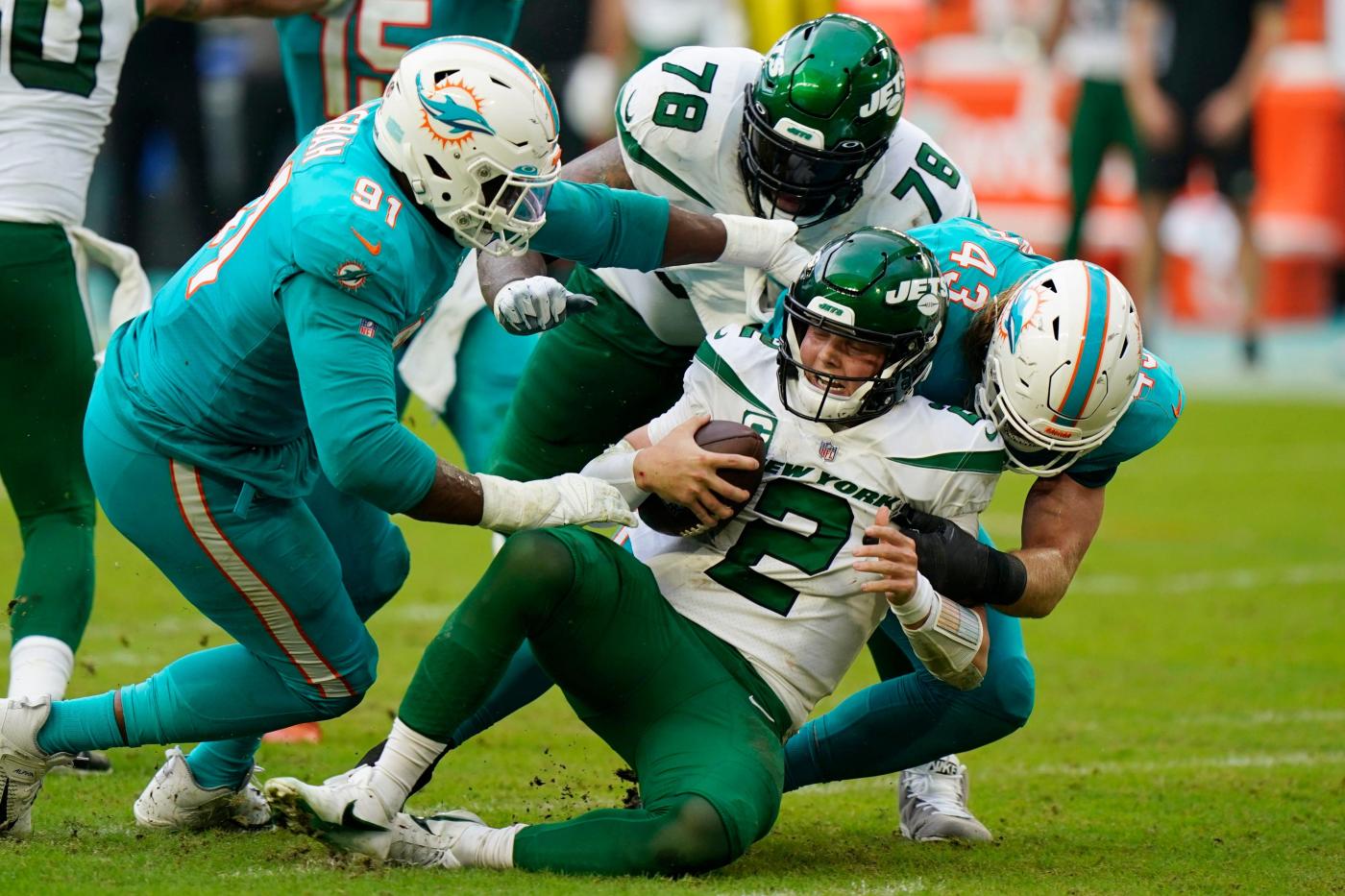 Playmakers are useless without protection.

And if you are just going by the raw numbers, you would say the Jets’ offensive line play in 2021 was abysmal. Gang Green’s quarterbacks were sacked 53 times, fourth most in the NFL. But hard as it is to believe, the O-line was better than what the counting stats revealed.

There were times when Zach Wilson couldn’t find his weapons because he was either on the ground or running for his life. He was sacked 44 times (third most) during his rookie campaign.

That’s way too much for a young QB and it can ruin his development. But 32 of those sacks came when Wilson held the ball for four seconds or longer, an eternity in the NFL. Only two other quarterbacks held on to the ball longer than Wilson did when under pressure.

Pro Football Focus blamed 17 of those sacks on Wilson, the most in the NFL.

So, nearly 40% of Wilson’s sacks could have been avoided if he hit his check downs after his first few progressions weren’t available or he simply threw the ball away. Sometimes he tried to extend to make a play down the field, the skill that catapulted him to the No. 2 pick in the draft out of BYU. That’s normal rookie growing pains.

But in the NFL, defenders are too fast, and Wilson learned that. Those are teaching lessons for the young QB.

So, the singular sack number doesn’t reveal the entire story. The offensive line was solid in 2021 even without starting left tackle Mekhi Becton, who suffered a knee injury against the Panthers in Week 1 and missed the rest of the season.

When Wilson missed four-plus games with a knee injury, the offensive line only allowed eight sacks in his absence with the trio of Mike White, Joe Flacco and Josh Johnson under center.

There were a handful of games when the offensive line did allow defenses to plant territory in the Jets backfield (Panthers, Dolphins and both Bills games). Overall, the pass protection was solid when you dive beyond the basic numbers.

But there’s still room for improvement. The run blocking was inconsistent compared to the pass protection.

The Jets rushing attack averaged 98 yards per game (25th in the NFL) and Gang Green was 14th in yards per carry. The ground game went as far as the offensive line drove them. Some weeks the run game was elite — Texans, Buccaneers and Jaguars. Other times it was nonexistent.

Also, a looming cloud over the offensive line is Becton’s situation.

The Jets believe in his talent, but he’s been injured multiple times throughout his career. And George Fant stepped in and played extremely well. Fant was fourth among tackles in fewest pressures allowed with 18, according to PFF. And he allowed only one sack.

So, head coach Robert Saleh admitted Fant and Becton will battle for the left tackle position going into 2022.

There is a scenario where Becton comes back healthy and regains the form he displayed as a rookie. I know the narrative isn’t positive on Becton, but that is a possibility that shouldn’t be dismissed because Becton is too talented.

The Jets could also be in the market for an offensive lineman with their No. 4 overall pick as an insurance policy if the draft board falls that way.

The other legitimate question mark on the offensive line is the right side.

During 2021, the left side of the offensive line played well with Fant and Alijah Vera-Tucker, who showed promise as a rookie even with the pressures allowed. Connor McGovern is a solid center.

On the right side, Morgan Moses was fine in blocking run but allowed 49 pressures with four sacks, per PFF. Greg Van Roten allowed 37, which is why he was benched. Laurent Duvernay-Tardif replaced Van Roten and was an instant upgrade.

Duvernay-Tardif and Moses are unrestricted free agents, so the Jets likely have a hole to fill there.

Bottom line, the Jets 0-line wasn’t horrible and has plenty room for improvement next season. Fifty-three sacks under any circumstance isnt good. But Wilson will continue to develop, which will reduce the sacks. Their run blocking can improve, which can be bolstered through free agency or the draft.

They are one piece away from being a formidable unit.