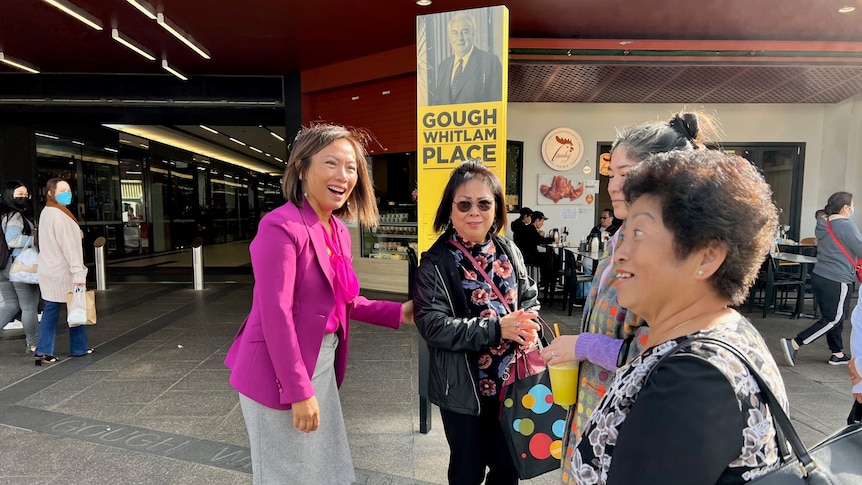 “Dai! Dai!” they cry from across the street, followed by a burst of Vietnamese.

As their new federal member walks through the Cabramatta mall in a pink suit, people run across to shake her hand and hug her. In Gough Whitlam Place, Dai Le is mobbed by fans and poses for photos.

After a lackluster election, the electorate feels, well, alive.

There’s shock and amazement that a once seven-year-old girl who fled Vietnam by boat will be heading off to Canberra to represent them. Who would have thought?

“We are the little people,” one man said. “But this time we raised our voice.”

It’s all a wild dream, according to Ms Le, who spoke to 7.30 a day after Labor’s parachute candidate Kristina Keneally conceded defeat.

On Saturday night, as the results trickled in from booths across Fowler in Sydney’s south-west, the veteran local councillor’s pleasant surprise turned to shock and disbelief.

The very safe Labor seat of Fowler hadn’t changed hands since its creation in 1984, and it had been held by retiring incumbent Chris Hayes on a margin of 14 per cent. Ms Le won narrowly but enjoyed a 16 per cent swing towards her. A political miracle.

“I sat there in my lounge room and I literally looked back at that time when I was on a boat in the middle of the ocean with my mum and two younger sisters and I remember how fearful that moment was for me because we thought we were going to die,” she said.

If the 2022 election was about flipping the bird to the major parties, then the result in Fowler speaks volumes.

Gough Whitlam is known as the father of multiculturalism and used to live in Cabramatta. There’s a monument to his legacy in the heart of the mall. It sits in front of a cafe where old men gather around tables to play traditional games.

So how did Labor, the purported party of multiculturalism and the working class — the people of Fowler are both — get it so wrong?

Ms Keneally would have lost her Senate spot had she stayed there, and needed a safe Labor seat to return to parliament.

Mr Albanese described Ms Keneally — a white American-born woman from the northern beaches, who did not grow up in south-west Sydney — as a great migrant success story.

Ms Keneally was unavailable for an interview.

“They don’t want to be taken for granted, and when they feel like you’re taking them for granted they’re more than willing to punish you.”

The Keneally decision sparked an outcry among some Labor MPs at the time, but the increase in cultural diversity among Labor ranks in this parliament is likely to neutralize the anger.

Either way, the end result is the first Vietnamese Australian to enter federal parliament, just not on the Labor side.

If blue seats turned teal this election, then Dai Le’s Fowler turned from red to pink. The politics are slightly the same, the shade is a little different.

The disparity between Fowler and the wealthy teal electorates in Sydney and Melbourne is stark.

In Fowler, most administrative voters are labourers and tradespeople, clerical and workers, machinery operators and drivers, and community service workers.

The rise of the independents in Australia is as uneven as our country.

Dai Le is quick to say she’s not a teal even though she’s happy to sit down and “have a cup of tea” with them.

How she votes in the parliament remains to be seen.

When 7.30 asked her how she would vote on climate change, Ms Le seemed to echo Scott Morrison who told 7.30 last week that some parts of the country were more insulated to such issues.

“The teal independents are very much affluent,” Ms Le said. “They have other things they can worry about. Whereas my electorate, we actually have to worry about food on the table.

“The climate change issue, the federal ICAC issue, I mean it is important to us, but for me it’s our health system.

“For me, the priority would be how to make sure there is affordable and cheap electricity prices.”

As she embarks on a life in the Canberra bubble, Ms Le is promising to be her same, genuine self, and on the streets of Fowler, voters are proud that one of their own will be in parliament.

“Menzies, years ago, talked about the forgotten people,” said Than Nguyen, a former Vietnamese community leader.

“We are the real forgotten people.”

Politicians be warned. If you forget the voters, they’ll remember.

Need a break from election news? Check out these stories

These Five Signs Will Tell You When the Wall Street Correction Is Over, Says Seasoned Strategist

Tanzania’s female president has appointed a woman as defense minister