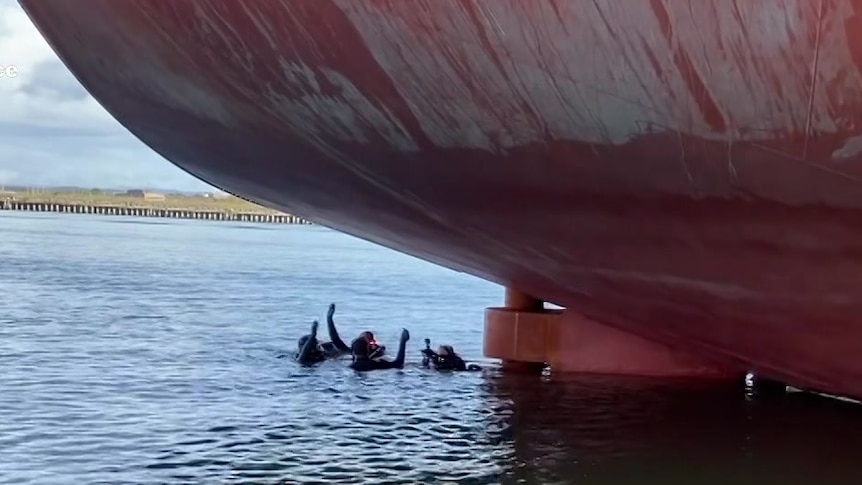 International crime syndicates are attempting to smuggle drugs into the country strapped to the hulls of cargo ships to evade detection, police say.

Once the ship arrives at the port, scuba divers are standing by to collect the contraband.

The audacious smuggling route was exposed this week when a scuba diver was spotted floating in the water at the port of Newcastle, close to where a vessel that had recently arrived from Argentina was being unloaded.

Floating around the man, who was pronounced dead at the scene, were numerous packages of cocaine with a street value in the tens of millions of dollars.

It’s believed the diver was attempting to collect the packages from the cargo ship, Areti.GR, when he got into trouble.

Detectives say the price paid for cocaine in Sydney is the highest anywhere in the world, making it a magnet for international drug traffickers.

“The high retail price of cocaine in Australia is a huge draw for international drug traffickers and they are targeting our community,” Organized Crime Squad Commander, Detective Superintendent Rob Critchlow, said.

“It is a high-end, sophisticated operation. We’re looking at moving people and commodities across the world.”

Police have identified the scuba diver who died at the scene and believe he may have traveled from South America.

Detectives have known for some time that ports within easy reach of Sydney are being targeted by international drug traffickers.

“Sydney is a huge market, I think we’re all aware of that,” Superintendent Critchlow said.

“We are certainly concerned about the ports of Newcastle and Wollongong. Organized crime definitely look for weaknesses to target at those ports.

“Any port has a lot of movements, so a lot of ships, a lot of trucks, a lot of people. So it is easier to hide drugs among that.”

Police first became aware that gangs were circumventing border checks by attaching drugs to the outside of ships during Operation Ironside — an international sting which intercepted encrypted messages from criminal gangs.

“The crew potentially have no idea there are narcotics placed on the hull of the vessel.”

He said there were a number of places on the hull of a ship where drugs can be concealed.

Authorities scale up their search tactics

Police said the alleged plot in Newcastle was by no means the first attempt to import drugs into Australia using this method.

The Australian Federal Police (AFP) allege the men were part of an international crime syndicate that twice tried to bring in cocaine hidden in tires chained to the outside of cargo vessels.

It’s alleged that on the first attempt in October 2019, one of the men, an experienced diver, tried to retrieve a tire from a cargo ship docked at Port Botany but dropped it onto the ocean floor.

The tire was later picked up by police divers but was found to be empty.

Police suspect the drugs may have become dislodged during the voyage to Australia.

Four months later, it’s alleged there was a second attempt to import 30kg of cocaine using the same modus operandi.

Again, police divers recovered a tire attached to the hull of the ship but no drugs were found, with the contraband thought to be lost at sea.

A third Sydney man charged over the alleged conspiracy is expected to face court next month.

Back in Newcastle, a post-mortem will be carried out on the South American diver found dead on Monday morning.

Police are also continuing to search the vessel and believe they have only recovered a “portion” of the shipment.

Law enforcement officers said the alleged smuggling operation was unlikely to be a first attempt.

“This was a well-drilled, professional group … comfortable sending drugs on a ship across the world,” Superintendent Critchlow said.

“They knew exactly what they were doing.”