Hugo Moyano concedes defeat and the Independent will hold elections, but blames Patricia Bulrich for the events. The president of the Independent, Hugo Moyano, distanced himself from the acts of violence that occurred in front of the club’s headquarters in Avellaneda, when a gathering of members was taking place, in which the police intervened by throwing gas, assuring that what had happened was work. Oppose. However, he added that a “unity list would be best” for the next elections.

“What happened yesterday was shameful and unfortunate. With what happened, it became clear what the intentions are because I understand that many of yesterday’s detainees are not from the Independent,” began Moyano, who continues to lead the institution. because he questioned the opposition list that had been submitted for the election of the officials to be renewed.

At least 48 arrested after incidents in independent assembly

In the same sense, he distanced himself from the events, from which he drove behind the headquarters with an armored vehicle. “What happened is a maneuver that he tried to somehow handle the project. I have peace of mind, I am not afraid, and peace of mind gives me strength,” said the trade unionist.

Furthermore, the chief director of the Independent acknowledged that the first football team was passing through a critical moment, but appealed the opposite in terms of institutional: “The results don’t happen, it’s true, and people are not very satisfied with it, But from there we got what happened 10 years ago, when the Independent was in B… it was the worst moment for the Independent, the most dramatic, the most painful,” he justified.

“It was an assembly to vote on the budget and never, in the eight-odd years that we’ve been independent, were there any disagreements, and yesterday they did disasters. The assembly respecting each member and the outside, accordingly. Was it the Mafia, was it the gang, these gentlemen led by (Fabian) Doman, (Cristian) Ritondo, (Florencia) Arietto and (Patricia) Bulrich intend to capture the Independent,” Moyano said. In conversation with Kronika TV attacked.

Hugo Moyano said, “I believe she wants to take the Independent (by Patricia Bulrich) and we believe it is because of the drink.”

“It has been decided that we are not going to appeal the decision of the Lomas Chamber. This day will be more or less, but elections will be held in the Independent. We will have to do the numbers because the statute gives time for it,” he said in Buenos Aires In conversation with television admitted.

Though far from calming the waters, he again fired thick ammunition against the opposition and the Braves (though there were real fans demonstrating against him on Friday): “These guys want to come back with all these bars they want them to.” use to keep in the independent. In a really unfortunate situation because all these characters who appeared yesterday appear, and well I sympathize with the journalists who were attacked, but they are the ones who bring families to the courts. get fired, they behave like that, insult and attack, and they believe the Independent has more fans than others for it, but it’s the only thing they know how to do “

Read Also:  For Jets cornerbacks, scars of coach's past are lessons of today 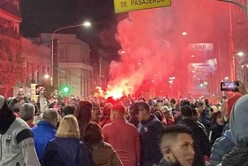 He launched, “They are all revolutionaries when they have no responsibility. They want to take over the club and then use it as a political platform.”

In the end, one of the leaders in images known around the world was leaving the headquarters back door with armored vehicles, and Moyano was blunt: “It’s not true that I survived. I went alone with Yoyo (Maldonado). And five or six from the board of directors. In the past they said the truckers were going to come, this, second, they messed up after failing since then.

Coronavirus: Continuous improvement in northern India, most positive cases in these states of infection

Men’s Heath Week an opportunity to make a positive difference