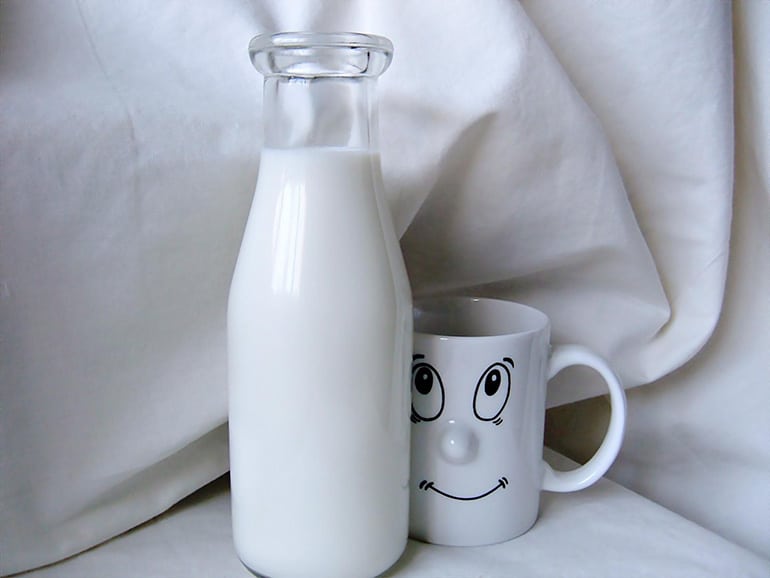 A new study published in Nature breaks some assumptions about why humans acquired the ability to digest lactose in milk in adulthood.

The genetic variation that has supported the persistence of lactase in present-day human populations is one of the most influential and rapidly evolving genetic adaptations in human populations over the past 10,000 years. Until now it was believed that lactose tolerance arose because it allowed people to consume more milk and dairy products. But new research tells a different story.

First, the research team mapped milk consumption patterns over the past 9,000 years based on an analysis of milk fat residues left in the pores of archaeological vessels. They then combined data from ancient DNA, radiocarbon dates and archeology using new computer modeling techniques, and finally analyzed the UK Genetic Biobank for current population data linking milk consumption to health in milk tolerant and milk intolerant individuals . Lactose. The team showed that famine and exposure to zoonotic pathogens are the factors that best explain the development of lactose tolerance.

Most European adults today can drink milk without any trouble, something we take lightly. But two-thirds of adults in the world today could be in trouble if they drink too much milk under certain circumstances, and this was true for nearly all adults 5,000 years ago. This is because milk contains lactose, and if we do not digest this unique sugar, it will move to our large intestine where it can cause cramps, diarrhea and flatulence. A group of symptoms known collectively as lactose intolerance. However, new research suggests that these effects are rare in the UK today and hardly relevant to health.

To digest lactose we need to produce the enzyme lactase in our intestines. Almost all babies produce lactase, but in most people around the world, that production declines sharply between weaning and adolescence. However, a genetic trait called lactase persistence has evolved several times over the past 10,000 years and has become widespread in various milk-drinking populations in Europe, Central and South Asia, the Middle East and Africa. Currently, about a third of the world’s adults are lactase resistant (or lactose tolerant).

Previous genetic studies—particularly those that use DNA extracted from prehistoric human remains, such as those carried out at Portalone de la Cueva Mayor de Atapuerca in 2014—have shown that lactase persistence is a genetic trait absent in Neolithic individuals and Chalcolithic individuals. was, and spread only during the Bronze Age. “The genetic form of lactase persistence was pushed to a higher frequency by a kind of turbocharged natural selection,” says Professor Mark Thomas of UCL, one of the study’s leaders. “The problem is that such a strong natural selection is difficult to explain,” he says.

“To understand how the persistence of lactase evolved, we first need to know where and when the milk was consumed,” says Professor Richard Evershed, lead author of the study. Evershed and his team at the University of Bristol pioneered the application of methods to detect milk fat absorbed in archaeological ceramic vessels. In this study we have assembled an unprecedented database of nearly 7,000 analytes of organic remains from archaeological ceramic vessels.

Marta Frances, a researcher at UBU, says, “This showed that milk was widely used in European prehistory from the first farms about 9,000 years ago, but it increased and decreased at different times in different regions.” ” Dr. Melanie Rofet-Salke, with students in Bristol, members of Dr. Evershed’s team, apply organic residue analysis techniques to prehistoric ceramics from El Portalone de Cueva Mayor (Sierra de Atapuerca, Burgos).

With this new and detailed picture of the implantation and distribution of milk use in prehistory, the researchers were able to investigate how this pattern of milk consumption is related to the development of lactase persistence. The UCL team led by Mark Thomas first assembled a database on the presence or absence of a lactase persistence genetic variant using published ancient DNA sequences from more than 1,700 prehistoric individuals from the El Major cave portal. Thus, it was observed that this gene variant appeared for the first time about 5,000 years ago. It already had appreciable frequencies by 3,000 years ago and has become more and more common to this day. Next, his team developed a new statistical approach to examine the extent to which changes in milk use over time explain natural selection for lactase persistence. Surprisingly, they did not find any relationship.

These findings challenge the long-held hypothesis that limitation of milk use induced the development of lactase persistence.

But if it wasn’t the consumption of milk (beyond its presence), what factors drove this turbocharged natural selection? The researchers had a few ideas.

Professor George Davey Smith, Director of the MRC Integrative Epidemiology Unit at the University of Bristol, analyzed data from the UK Biobank, which includes genetic and medical data from more than 300,000 living individuals. In their analysis, they found only minimal differences in milk consumption between genetically lactose-tolerant and non-tolerant people. More importantly, the vast majority of genetically intolerant people did not experience negative long-term health effects when consuming milk. This suggested that there may be a previously unrecognized factor driving the rapid increase in lactase persistence.

In short, milk consumption was widespread in Europe for at least 9,000 years, and healthy humans, even those who are lactose intolerant, can happily consume milk without becoming ill. However, milk consumption in intolerant individuals results in higher concentrations of lactose in the intestine, which can draw fluid into the colon, leading to severe dehydration with diarrheal disease. The team believes that this process could lead to higher mortality rates as the burden of infectious diseases increases, as the size and density of populations increase to a level where certain infectious agents can continue to spread among them.

Read Also:  Where is the detail? G-7 Nations agree to promote climate finance

In 2014, El Portalón de Cueva Mayor’s work with humans, in which Mark Thomas participated, had already pointed to this possibility, but with a greater emphasis on prehistoric famines. Jose Miguel Carretero, a researcher at UBU and a member of the Atapuerca project who participated in both studies, comments that “if you are healthy, you are lactose intolerant and you drink a lot of raw milk, you may have some cramps. Maybe some diarrhea, and you’ll get gas. It won’t be pretty, and it might be embarrassing, but you’re not going to die from it. However, if you’re malnourished, and therefore debilitated, and drink a lot of raw milk If you have diarrhea, you have life-threatening problems.” “And that’s probably the turbocharged natural selection we’re looking for.” Angel Carrancho, a fourth participant in UBU, said, “When crops fail, prehistoric people with high lactose content Those who consume non-fermented milk are more likely to consume non-fermented milk at the same time when they should not have done so.”

To test these ideas, Thomas’s team added indicators of past famines and exposure to pathogens in their new statistical method. The results clearly supported both explanations: there was more evidence of the occurrence of famine and infectious pathogens when the lactase persistence gene variant was subject to strong natural selection.

In the words of UBU researcher Enneko Iriarte, who signed the article, “New research shows how, in late prehistory, as populations and settlements grew in size, poor sanitation conditions caused human health to grow rapidly.” an increase in infectious diseases, especially of animal origin; a subject which, paradoxically, is still very topical today.”

In summary, the authors conclude that, whether due to famine, infectious epidemics or both at the same time, high consumption of raw milk, almost oblivious, would be a good solution because it provides protein, calcium, vitamins and fat. But this would have increased mortality, with individuals with lactase deficiency being particularly vulnerable. Under these famine conditions, rates of disease and malnutrition increase and lactose intolerant individuals are more likely to die before or during the reproductive years, thus increasing the population frequency of lactose gene persistence to current levels. Is.

Paradoxically, it appears that the same factors influencing human mortality today have driven the evolution of this amazing genetic adaptation throughout prehistory.

Technology is unable to replace human behavior at the moment