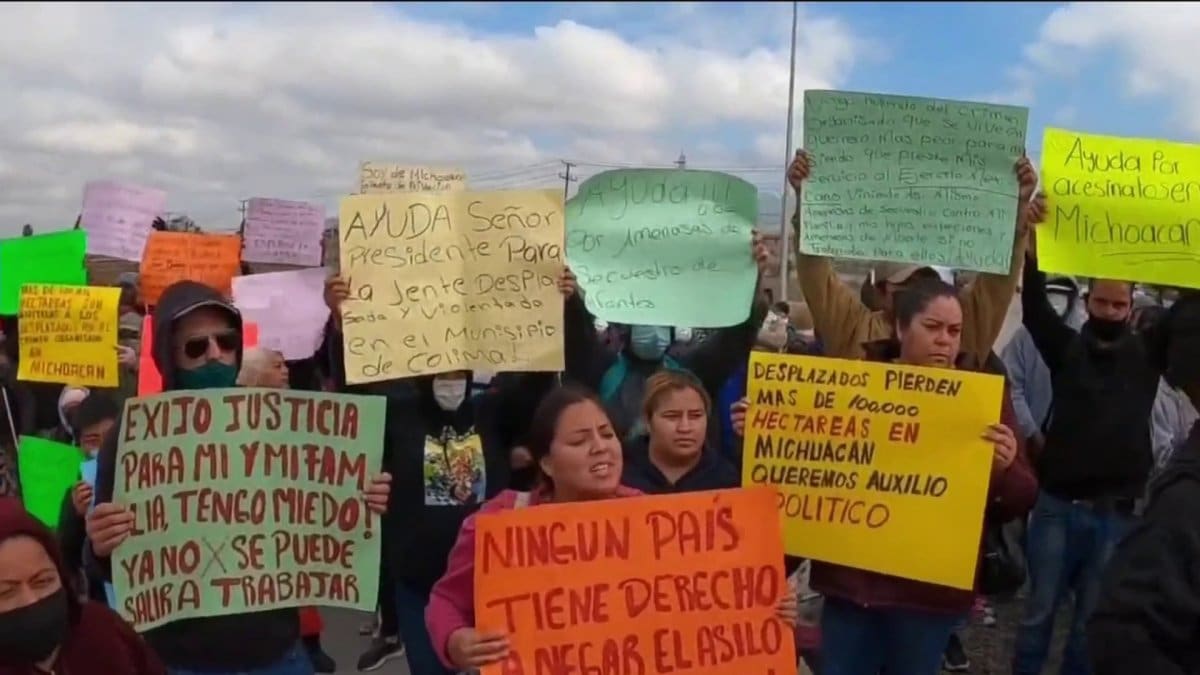 TIJUANA—About 300 migrants of various nationalities arrived outside the facilities of the United States consulate in Tijuana this Wednesday in what they described as cries for help.

Well, when they were displaced by violence from their native places, they told that they are in complete uncertainty on this border.

Holding banners and pleading for help, they raised their voices and shared their stories outside consular facilities.

“Serving the nation is not easy, there is a lot of pain,” said a former soldier who spent seven years in the army while serving in his native Guerrero.

until he and his family said they too were displaced by organized crime.

“I came to the United States to request asylum and they rejected me, I can’t file a complaint in Guerrero because everything is corrupt there too. Here I put my complaint so they support me”, ex-soldier Told.

Like them, the testimony in the performance was repeated with a microphone and a horn.

Nearly 300 migrants share fear, loss and, in many cases, grief, but also hope. Like Robertson Hernandez from Guatemala. He was a taxi driver in his country, and he said he refused to work for organized crime, and they also tried to steal his son, which led them to immediately flee over the border.

“And those of us who refused, they hit me, they left this eye very badly, they almost beat it. That if I didn’t give them 10,000 quetzals, they would kill me and my family; they told me Started telling where each one of my family worked, including my wife’s family,” he told Telemundo 20.

A delegation of migrants, including a 72-year-old grandmother who was displaced by violence in Michoacan, was left in a wheelchair, and whose daughter was killed for denouncing her eviction from her land , entered a United States consulate to deliver a list containing the names of hundreds of asylum-seekers who are waiting to know details to be able to request political asylum, weeks after Title 42 was repealed.

Pastor Albert Rivera stressed that it is important to know the care protocols of the US government so that institutions can support and engage in an orderly process.

“We distribute documents to everyone who is in our shelter, as long as the protocol is given, at least they already have the names of those who are in our shelter, and we communicate with them a little more directly. going to do,'” he mentioned.

Well, the numbers in shelters are on the rise and civic organizations work a forced march, which is why they urgently need the community support that can be provided through an “adopt a shelter” campaign.

According to Enrique Lucero, the city council’s director for migrant care, there are 30 shelters that need collective support from the community on both sides of the border.

“And we know that shelters are at their maximum capacity right now and they need food, medical care or supplies to remodel shelters, expand it and that’s why we’re making this call,” he said. Told.

Well, the migrant flow doesn’t stop and migrants continue in an eternal wait at the border where the only protection they have is that the numbers of people grow and the uncertainty of how to get political asylum in the United States persists.