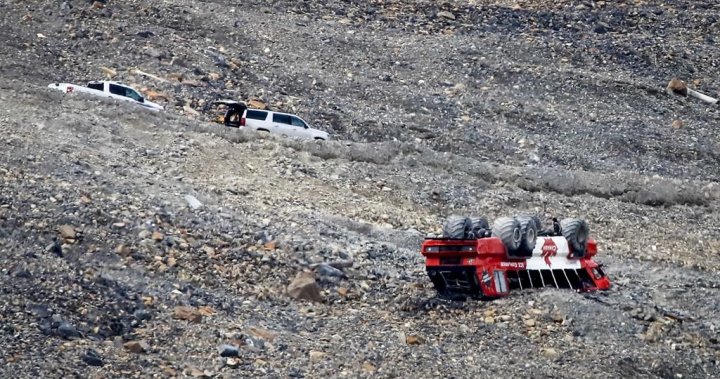 The tour bus company involved in a 2020 Icefield crash in Jasper National Park has been charged under the Alberta Occupational Health and Safety Act while the RCMP’s criminal investigation has concluded.

Brewster Inc. faces eight charges under the OHS Act, related to “failing to control the hazard of the grade of the slope of the lateral moraine,” not mandating seatbelt usage, not maintaining seatbelts and not checking the safety of equipment.

The case is scheduled to be heard in a Jasper provincial court on June 23.

On July 18, 2020, an ice explorer vehicle on the Columbia Icefield rolled down an embankment with 25 people in it. The rollover killed three passengers and 14 others had life-threatening injuries after the big-wheel, red-and-white Ice Explorer lost control on the road to the Athabasca Glacier, about 100 kilometers southeast of Jasper, Alta.

“What these current OHS charges are meant to do is implement where a company has failed for people’s health and safety,” Basil Bansal, the lawyer for a family who was in the ice crawler and saw one member die during the crash, told Global News .

Bansal’s clients are one of many plaintiffs in the civil cases and class actions stemming from the crash that Brewster faces.

He said the charges reveal OHS’ view of Brewster’s liability.

“We know the injuries that were suffered and the life that was lost. But this actually shows where the company was negligent and what they could have done to prevent this,” said Bansal, a partner at Edmonton law firm Diamond and Diamond.

“So we have some answers now.”

Bansal said his clients and plaintiffs in other claims have been waiting for these answers for nearly two years.

“It’s good to see that the government has taken this seriously. These charges do show the negligence of the company and it’s going in the right direction,” he said.

“But unfortunately, our clients’ lives won’t be the same.”

A Friday news release from the Alberta government also said the criminal investigation was done as done separately from Alberta Occupational Health and Safety.

Pursuit, the company that runs the Icefield bus tours, said in an emailed statement that it can’t comment on specifics of the case because of legal proceedings.

“We continue to support a transparent and multi-agency investigation into this tragic accident,” it said.

The RCMP are aware of the charges under the OHS Act and shared all information they gathered with the OHS investigation, the news release said.

A final RCMP report into the rollover has not been publicly released but was submitted to Alberta prosecutors in April.

The Crown will determine if the evidence warrants any criminal charges.

Bansal said an RCMP report and possible criminal charges could provide further answers to questions clients like his have about the rollover on the Athabasca Glacier.

He said he has also been a past passenger on the ice crawler and hopes the OHS charges change how Brewster and other tour companies operate.

“The whole purpose of these OHS charges is to implement measures such as seatbelts, driver training, mechanical records and checks so that these issues don’t occur again,” Bansal said.

–with files from The Canadian Press