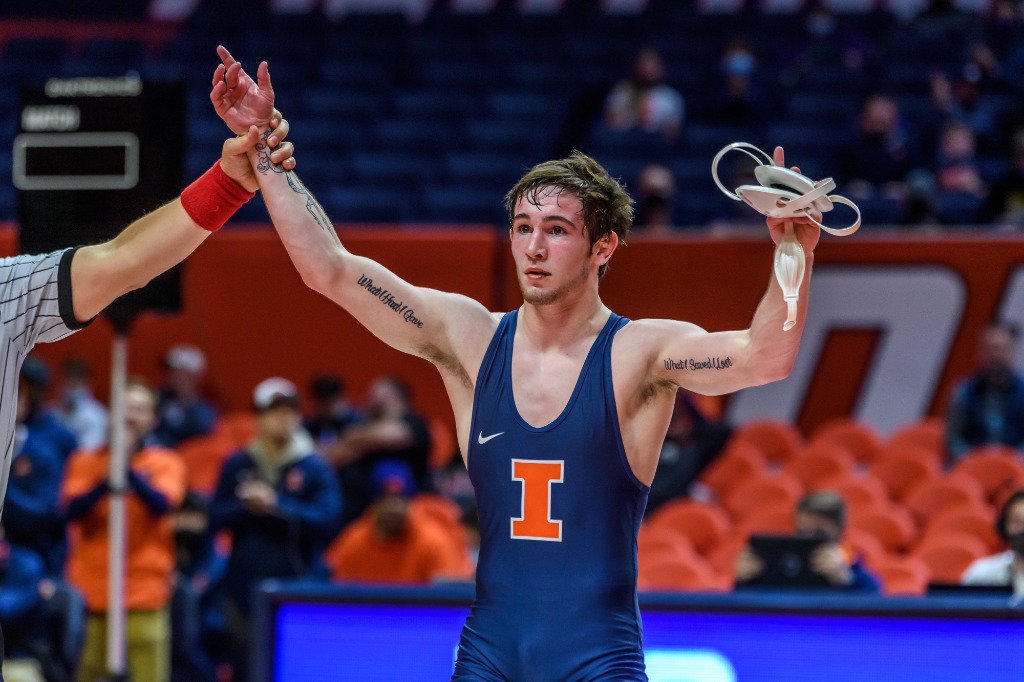 Freshman wrestler Lucas Byrd celebrates his win during the meet against Iowa on Jan. 16. The Illini will be hosting for Northwestern on Saturday.

This Saturday, two highly-touted but struggling Big Ten rivals will face off at State Farm Center as Illinois takes on Northwestern.

After an impressive showing at the Matmen Open several weeks ago, the Illini dropped matches to Rutgers, Iowa and Purdue.

As for the Wildcats, after a close defeat at Wisconsin on Jan. 7, Northwestern dropped three more Big Ten matchups to Minnesota, Iowa and Nebraska, getting outscored 87-27 over that span. The Illini will try to continue this trend.

The last time these two teams met was almost a year ago, a meet the Illini won, 31-6, on the road courtesy of big wins from Lucas Byrd, Dylan Duncan and Matt Wroblewski.

Historically, saying that Northwestern has had a hard time defeating Illinois would be an understatement. In 18 matches between the two teams, the Illini have won 17 of them, with the one loss coming in 2019 by a final score of 25-12, which snapped the Illini’s 18-year winning streak against the Wildcats.

All the numbers are shaping out to make it seem like Illinois has a very solid chance to win the match. This year, the Wildcats are winless in both conference play (0-4) and on the road (0-2). The Illini will look for their first conference win and their first victory at State Farm Center this season.

Northwestern is no team to take lightly, though, as they just dropped out of the top 25 and have a lot of young talent. At 141 pounds, freshman Justin Benjamin has posted an impressive 6-1 record (not listed as a starter), freshman Frankie Tal-Shahar and sophomore Michael DeAugustino have impressed so far and the most impressive so far and the one t0 keep an eye on is freshman Chris Cannon, who leads the team with 10 wins and only one defeat.

This matchup should be a good one with two Big Ten rivals looking for something to prove and looking to end their current losing streaks.

In Kyle Braddish’s ‘giant test’ against the Yankees, a mixed bag ends in a 6-2 loss to the Orioles, their fourth straight