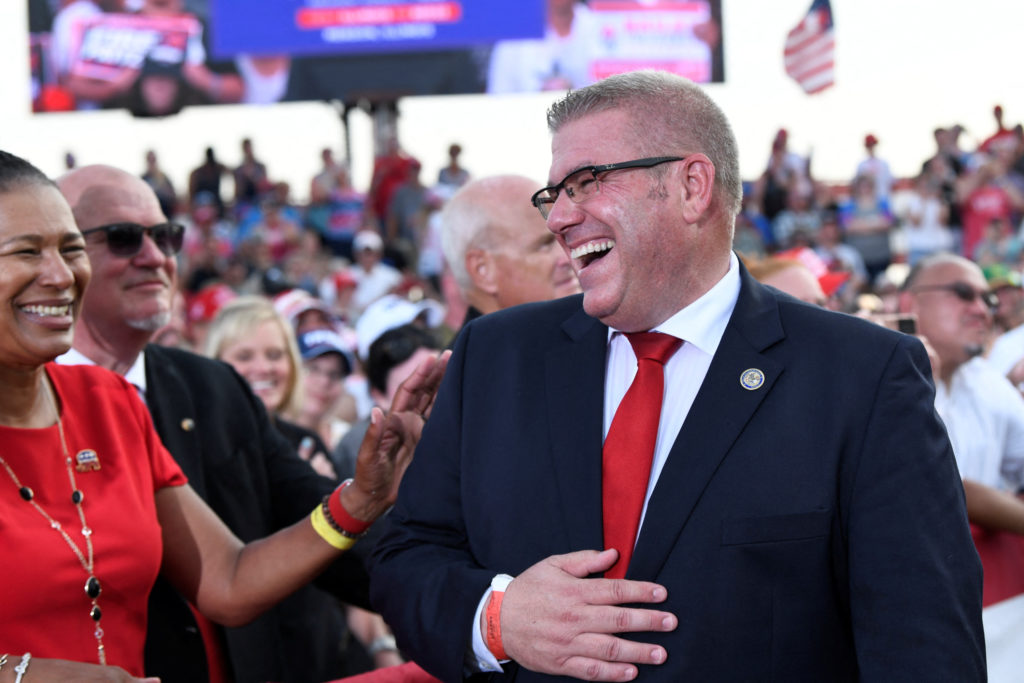 CHICAGO ( Associated Press) – Illinois Republicans on Tuesday elected Conservative Sen. Darren Bailey to take on Governor JB Pritzker, a billionaire who easily won the Democratic nomination and who spent millions to get the rival he wants and its already significant advantage in the state this fall.

Bailey defeated five other Republicans to win the nomination. The farmer from Xenia is a staunch abortion opponent who received former President Donald Trump’s approval on Saturday. Bailey raised his nationwide profile during the pandemic by opposing Pritzker’s COVID-19 measures. He sued Pritzker over an order to stay home issued by the governor, and was escorted off the floor of the Legislature for refusing to wear a mask.

Pritzker, an heir to the Hyatt hotel fortune seeking his second term, and the Democratic Governors’ Association have spent a lot on ads to help Bailey win the GOP primary, including ads showing that he is “100% pro- life “is. While these messages have boosted Bailey’s standing with Republican voters, it is likely to hurt him in a general election in a place where Democrats control all statewide offices and voters rejected Trump twice by double digits.

Bailey rejected the idea that he could not win and criticized “establishment Republicans” for contributing to decades of mismanagement in the state.

“We are going to send a message to the Republican establishment that we will not be bullied into sacrificing our principles to elect their candidates,” he told a crowd at a campaign rally in rural Illinois this month.

Republican Richard Irvin, a former prosecutor who was the first Black mayor of Illinois’ second-largest city, was seen as a top candidate when he joined the race, with financial support from billionaire Ken Griffin. But despite Griffin sinking $ 50 million into Irvin’s campaign, he has been damaged by repeated attacks by his opponents, including Pritzker.

Unlike Bailey and his four other rivals, Irvin avoided talking about abortion or saying he voted for Trump. The mayor of Aurora has instead focused on issues such as crime in Chicago and legislation signed by Pritzker, which he says make policing more difficult. He said he is against abortion except in cases of rape or incest or to protect the life of the mother.

Irvin also argued that he was the only GOP candidate who could beat Pritzker in November because he could win votes from Republicans, independents and some Democrats.

“The reality is that I’m the candidate who can win this race and that’s why the attacks are coming,” Irvin said as he visited a manufacturing plant.

Tim Zink, a 70-year-old retiree, was wearing a National Rifle Association T-shirt when he brought out his ballot paper in the northern Illinois town of McHenry for Bailey.

“I just like the way he stands about just about everything,” Zink said. He added that he did not trust Irvin, whom he called “two-faced” and “friends with Pritzker”.

Joe Berstein, from the northern Chicago suburb of Highland Park, voted for Pritzker: “So far I think he’s doing a good job.”

Pritzker defeated a much lesser-known competitor, Beverly Miles, for the nomination. He said he is not afraid of any competitor coming November.

“I will meet anyone on the other side of the corridor and we will win,” said Pritzker.