‘I’m devastated’: BC mom pleads for help after daughter punched, kicked and forced to kiss shoes – BC | Nation World News 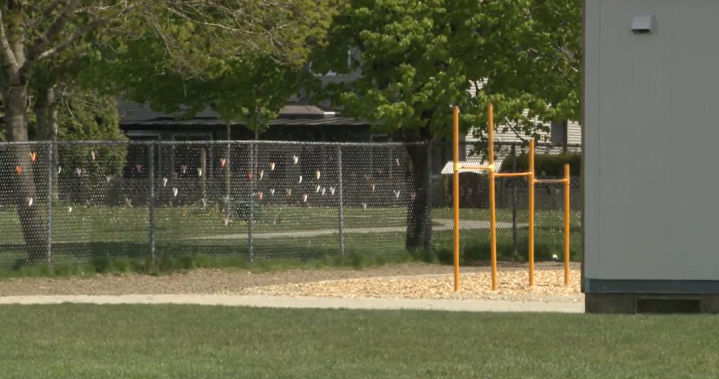 WARNING: Some details in this story may be disturbing to readers. Discretion is advised.

A BC mother is urging witnesses and parents to come forward after her daughter was beaten, bloodied and humiliated in a brutal assault filmed on cellphones.

Neither the 15-year-old victim nor her mother can be identified under the Youth Criminal Justice Act.

In an interview with Global News, her mother said her daughter was lured to Hillcrest Elementary in Cloverdale on Saturday night under the belief she was meeting friends for birthday cake.

When the girl realized that wasn’t the case, she tried to walk away, her mother said, but videos show multiple assailants kicking and punching her on the ground, then forcing her to kiss their shoes.

“I can’t believe kids have gone out and would severely harm another child this bad or humiliate or degrade someone the way they did to my daughter.”

Based on the videos, the mother estimated between 25 and 50 people witnessed or participated in the attack, and that several of them also filmed it.

By the time it was over, she said, her daughter had a fractured nose, a concussion, black eyes, bruised ribs, a rolled ankle that requires x-rays, and cuts and bruises all over her body. She is still struggling to eat due to swelling, her mother added, and coughing up some of the blood she inhaled in the assault.

“To find out there were 25 to 50 kids standing around videotaping my daughter getting beat up … and seeing how bad she was bleeding and no one stopped to help her?”

Of the many witnesses to the swarming, Surrey RCMP confirmed that no one called police. The incident was reported by neighbors who heard the commotion, Cpl. Vanessa Munn said in a Tuesday interview.

She said one youth, “the primary aggressor,” was arrested and released to a guardian on an undertaking with a future court date. No one has been charged and police are working to identify additional witnesses and suspects, she said.

“The video and the level of violence exhibited is extremely concerning,” Munn told Global News. “Since the video has been posted on social media, we have received additional tips from people who do recognize other people in the video.”

The Mounties have conducted additional safety planning with the 15-year-old survivor, said Munn. They did not issue a media release to solicit tips after the attack investigators were making progress, she added.

“Based on the information that we had, there was not believed to be any additional risk to the public,” she explained. “It was an incident that occurred between youths who are known to each other, and we had identified the main aggressors in that situation.”

Read Also:  Witness: 'No question' about plot to get Michigan governor

Meanwhile, the girl’s mother is urging witnesses and any parents or teens who recognize people in the videos to contact police right away. She said the bystanders in the videos are “cowards” and should be charged along with the perpetrators.

“It’s absolutely disgusting what you’ve done to my daughter,” she said of the group. “I want every parent to know what their kids do and what they have done.

“My daughter is missing out on life now. She’s been pulled out of school. She won’t even walk to the mailbox to get her package because she’s terrified of someone seeing her or someone hurting her.”

The woman said she raised her daughter to love and to walk away from violence, and in the end, she was punished for it. She described her child as “the most kindest, sweetest kid ever,” who will now face a lifetime of trauma.

No one who witnesses violence and does nothing is innocent, she added.

Both she and Munn said those who feared for their safety if they could have intervened, and should have, called police.

, With files from Rumina Daya

Fire and rain: More than a couple of extreme climate hits in the West

The heroine said that there was an attempt of rape and murder, drugs were found during the raid on the house