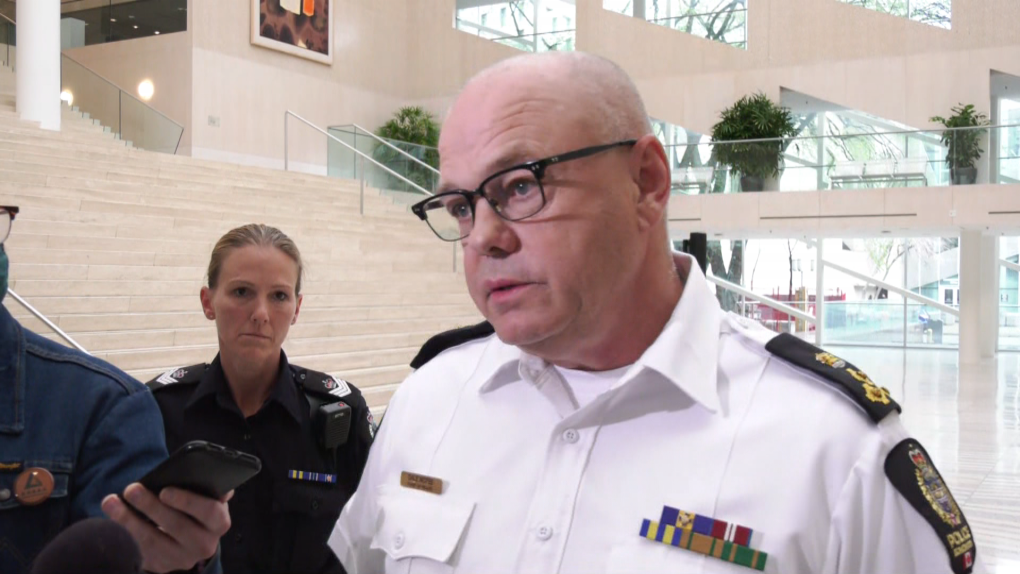 After outlining a violent 24 hours in downtown Edmonton, the city’s police chief promised Thursday to scramble more officers into the core faster than previously planned.

“Two people lost their lives, and there’s a whole bunch of other serious stuff in relation to that.”

McFee listed suspicious deaths in Chinatown, “a brazen shooting outside a pub” and a stabbing at an LRT station, which all occurred Wednesday night or early Thursday morning, as reasons for his response.

There was also a death at a homeless camp which was later deemed non-criminal and an injury collision that McFee said all had to be handled to downtown officers.

McFee was repeatedly asked how many officers would be moved but he said specifics are still being worked out.

“You will see an increased visual presence in our downtown, including the core, Chinatown and 118 Avenue. We will seek increased collaboration with transit and other community peace officers if possible, but we will be going on our own if we have to,” he announced.

McFee apologized to other parts of Edmonton and said some neighborhoods “aren’t going to get (services) for a while.”

‘AN ISSUE OF THEIR OWN INACTION’: JANZ

On Wednesday, Edmonton City Council debated funding for policing, which the commission chair said would amount to a $22 million cut.

McFee suggested he needs more money and expressed frustration at the possibility he may be in line for a frozen budget.

“While we can address the immediate crisis of our downtown, this is not sustainable. We can maintain it for a few months, but beyond that it’ll risk too many negative impacts in other areas of the city,” he said.

“We need to remove the politics and have some constructive discussions on how to move forward. We all have a role. Frankly, the discussions being had at the political level right now, are not helpful.”

“The EPS leadership look to be trying to solve an issue of their own inaction,” he tweeted in response.

“Crime is going down but 19.1% of calls are coming from downtown and they only assigned a fraction of resources. Like EPS did for LRT. The Mayor wrote the police a letter asking about downtown resources allocation and I will share the response when I receive it.”

“I am devastated to hear of the violent attacks that happened in Edmonton’s Chinatown last night, leaving two valued community members dead,” he wrote.

“I have heard Chinatown’s calls for increased safety measures, and will be working with the community and EPS to find immediate solutions, following my motion that passed on Monday to allocate funding and resources to Chinatown and the downtown core.”

Sohi encouraged anyone affected by the attacks to reach out to Canadian Mental Health Services Canada for support.

McFee mentioned he may reach out to the province for more money, but he did not put a dollar figure or timeline on that.

‘Not out of the woods’: CDC issues new warning on virus