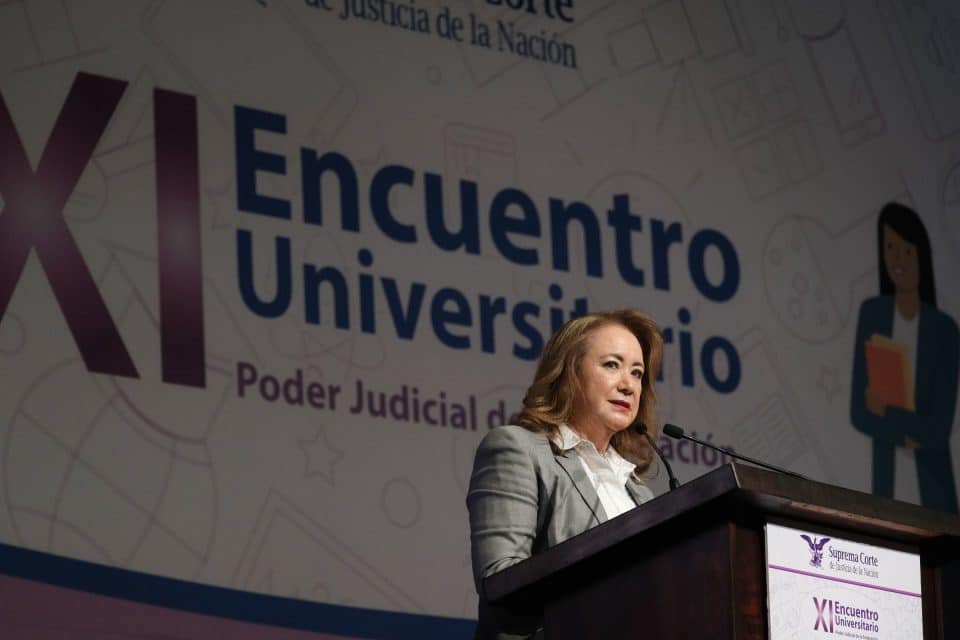 With only one week to define his new presidency before the plenary session of the Supreme Court of Justice of the Nation (SCJN) on January 2, one of the candidates for the post, Minister Yasmin Esquivelface’s accused of plagiarism in his undergraduate thesis This not only stands in the way, but also opens up two unfavorable scenarios: facing impeachment trial or that people’s pressure increases that they ask him to resign from the Supreme Court For “serious reasons”.

The allegations against Esquivel began last Wednesday, when author Guillermo Sheridan published an article on the site Latin In which he draws parallels between Esquivel’s thesis and a paper submitted a year earlier by a student at the Faculty of Law. UNAM’s FES Aragón—formerly the ENEP, where Esquivel studied—announced that it would conduct a detailed review of the case, while UNAM’s General Directorate of Libraries reported only on Friday night that it was “a high-level… Coincidences were “found” between the two documents.

Esquivel denied plagiarizing and President Andrés Manuel López Obrador supported him on Friday morning when he downplayed the situation at his daily press conference. He said that even if Esquivel was wrong, it was “as a student” and alleged that Sheridan and other intellectuals had done more “damage” to the country.

scene of a political trial

While the minister seeks to defend herself with letters from her professors—such as Martha Rodríguez Ortiz, her thesis director—, the constitution contemplates a mechanism by which sanctions can be requested against her.

According to Magna Carta, Esquivel or any other public authority may face impeachment If it is verified that in the exercise of his functions he has “committed such acts or omissions which are prejudicial to the fundamental public interest or to his proper office.” This possibility is established in Article 110, that provides for dismissal and disqualification from holding public office as sanctions,

The request for impeachment has been made to Congress but, according to the lawyer luis tapiaTo pursue this route “first the FES Aragon would have to pronounce, that is, the university authority would have to decide that plagiarism had indeed occurred and determine a consequence and, based on this, Congress could pronounce”. .

he is also a lawyer francisco burgoa He agreed that there was a way to formally request a political prosecution against the minister, although this would first require confirmation that he had committed plagiarism.

“Number one: We have to start with the fact that we are facing a situation completely unprecedented in the history of our country. I do not remember such a situation arising at the highest level of administration of justice, as in the case of a minister or a minister of the Supreme Court,” he said in an interview.

“But I see it as very complicated, because for impeachment to proceed it would have to be formally proven that this person, Yasmin Esquivel, actually engaged in plagiarism,” he said.

In the event of a request for impeachment, both houses must intervene in the process and approve it by a majority. In such a scenario, it is possible that any final sanction against Esquivel by Murray’s legislators may have been withheld, Party of President López ObradorWho promoted the arrival of the current minister in the court.

,@lopezobrador_ The minister minimizes the charge of plagiarism against Yasmin Esquivel’s thesis: “Any mistake made by the minister is infinitely less than the damage done to Mexico by Cruz and writer Guillermo Sheridan when she was a student.” pic.twitter.com/3OBpu6BQRm

Scenario of resignation for “serious reasons”

Another scenario is that, in the face of criticism and social pressure, the minister himself will submit his resignation, Article 98 of the constitution states that the resignations of the ministers of the Court “shall proceed only for serious reasons.”

Tapia said in this regard that this option would only apply if UNAM determines that plagiarism was indeed present, since then Esquivel “would not, at least, satisfy a constitutional requirement to become a minister.”

Article 95, Clause III of the Constitution states that ministers must have a degree in law with a minimum of 10 years of seniority at the time of their appointment.

The closest instance of a minister resigning happened in October 2019, When Eduardo Medina Mora submitted his resignation to the Supreme Court, Although he did not disclose the reasons, his resignation comes amid a criminal investigation into possible irregularities in his and his family’s assets.

Bargoa held that the concept of “serious reasons” is too broad and subjective.

The lawyer said, “Since it is so flexible to talk about ‘serious reason’, she can without doubt submit her resignation, which is not going to happen, as she wants to openly admit that she has done literary work.” Stolen.”

“The other ‘serious reason’ she could argue about, which would be like the most dignified way, is that I also don’t see that scenario as possible unless she gets a lot of pressure, for her to say that if His person is going to harm the teaching of justice at the highest level like the Supreme Court, it is not going to affect the credibility of the court and hence it is better to walk away without admitting that it has committed plagiarism”, he said. .

Meanwhile, Tapia explained that the Federal Judicial Council (CJF), the other body of weight in the judiciary, cannot act in this caseGiven that it has no ability to approve ministers.

Other scenarios proposed for the minister’s future, if it is verified that he has committed plagiarism, are those affected, ie the person who plagiarized the thesis, file a claim for moral damages against Esquivel“One scenario that could exist, but ultimately it is through civil proceedings, not through criminal proceedings,” Bargoa said.

Similarly, if the UNAM declares the invalidity of the thesis and the cancellation of their university degree in law, this will also lead to the SEP i can take away your professional licenseNeed to use your business.

“Here’s hoping that UNAM itself is up to the task of conducting an authentic review with 100% techno-academic criteria and determines what seems clear to all of us: plagiarism, not paragraphs like Enrique Peña Nieto’s , but of a practically complete thesis. If UNAM says nothing is happening, I think UNAM’s credibility game, its academic reputation in the face of a situation of this nature also goes there,” Burgoas said. concluded.