In an odd hiring market, pandemic-era lessons from a metal selling, axe-throwing CEO 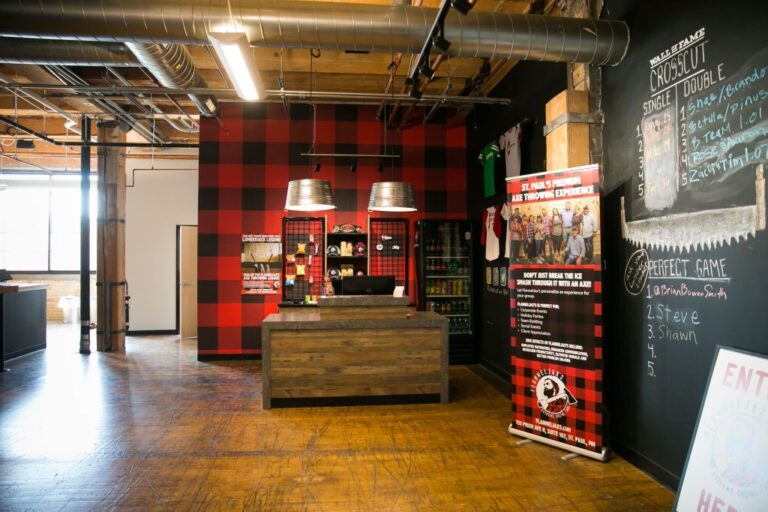 Schober, who is based in Toronto, Canada, also knows recreational ax throwing, at least from a business perspective. About five years ago, he opened his first FlannelJax’s Ax Throwing lounge on Prior Avenue in St. Paul, next door to the former manufacturing warehouse that houses BlackStack Brewing and CanCan Wonderland, with the goal of proving the concept and franchising outward. He quickly added both corporate and franchised FlannelJax’s locations in Grand Rapids, Mich.; Madison, Wis.; Roanoke, Texas Seattle and Denver.

Then came the pandemic, which cleaved a hole in the market for group bookings, especially corporate events, his bread-and-butter. Business for Schober’s FlannelJax venues is down everywhere, but it’s taken a special hit in St. Paul, where it’s fallen to about a third or a fourth of pre-pandemic levels.

A city-driven mask mandate in early January and a vaccine-or-test mandate imposed later that same month didn’t go over well with many suburban customers, though with COVID cases declining in Ramsey County, the latter was lifted Thursday in time for Valentine’s Day weekend and the Super Bowl.

What Schober gained in clients who appreciated the extra COVID precautions hasn’t made up for the net loss in customers. “In terms of government restrictions due to COVID, the two most restrictive markets are Seattle and St. Paul,” Schober said. “Our outbound sales leader was mentioning St. Paul seems to be the home base for cancellations.”

Still, when Schober closed shop for nearly two months from mid-November to mid-January, it had little to do with COVID’s then-fast-spreading Omicron variant, at least not directly. Across two very different industries, he’s seen similar changes in the labor market years in the making, and while they’ve been hastened by the pandemic, they began well before COVID-19 became a household word.

Those changes — including, but not limited to the “Great Resignation,” driving workers toward retirement, new jobs or no jobs at all — are just as apparent in his metal shops as they are in his bar-like recreational venues, and they may offer some perspective and guidance for other employers.

“We have seen what we think of as a permanent change in employer-employee relationships,” Schober said. “A lot of these things would have happened anyway, but they were fueled by COVID. Will it go back to where it was? Maybe it’ll go back a bit, but I don’t think so overall.”

Four or five years ago he started hearing about young people skipping out on scheduled interviews at his Metal Supermarkets in the United Kingdom. Schober was taken aback at the time, but the trend quickly spread to the US and Canada. “I was quite surprised, because I had never heard about that happening,” he said. “There’s a different sort of cultural relationship. … Now it’s everywhere.”

Blowing off a job interview — or “ghosting” — without concern about burning professional bridges or developing a negative reputation within an industry might seem like a minor trend. Schober now sees it as a precursor to the labor shortage that shuttered the St. Paul FlannelJax’s in November and has forced changes to school start times, trims to public transit service, cutbacks at restaurants and a wide gamut of restructuring in the private sector.

“Younger people are more wiling now to stand up when they don’t appreciate the relationships with their fellow employees or their supervisors,” he said. “They’re a little less about serving their time for the company, and they’re asking what’s in it for them. And to some extent, I don’t think it’s unhealthy. It’s how people are brought up to follow through on their desires and take action on their situation.”

What’s that mean from his perspective as an employer? Paying out higher wages, for starters.

That entailed raising hourly wages from $13.50 plus tips to $15 plus tips, and making sure the benefits for his general manager and professional staff aligned with market demand. In the US, he’s learned, offering a 401(K) retirement savings plan is even more attractive than vacation benefits, and more important than he initially assumed.

“You have to be more people-oriented as an employer,” Schober said. “It’s not just compensation, although compensation is important. It’s their safety and their working conditions. … Think of it as a recruitment process, trying to sell a career more than a job.”

As for his advice to workers, he counsels them to investigate growth opportunities with prospective employers instead of just comparing entry-level job offerings.

“Sometimes young people are just looking at that first glimpse of a company — how much pay will I get and what kind of hours? — instead of long-term,” said Schober, adding somewhat tongue-in-cheek: “That probably sounds like an old man being grouchy.”

So why branch out from metal sales into ax-throwing? Is that a personal hobby?

Schober acknowledged he’s not that interesting. After being turned onto the opportunity by a company vice president who had taken his family axe-throwing, he studied the marketplace and found many axe-throwing venues were too casual and not safety-conscious enough to capture corporate sales.

“We were looking to start a second business,” Schober said, “and we looked at it from what would be a good business to franchise, what would have consumer appeal, a reasonable capital cost, something that was scalable, and how well we could organize it and test it.”

With St. Paul leading the way as a corporate model, business was looking promising before the pandemic, and Schober is optimistic the many franchises he once envisioned will roll out again in time. “Our intention was to have a lot more locations than six,” he said.