In Canada, Pope Francis apologizes for misbehavior in Indigenous schools 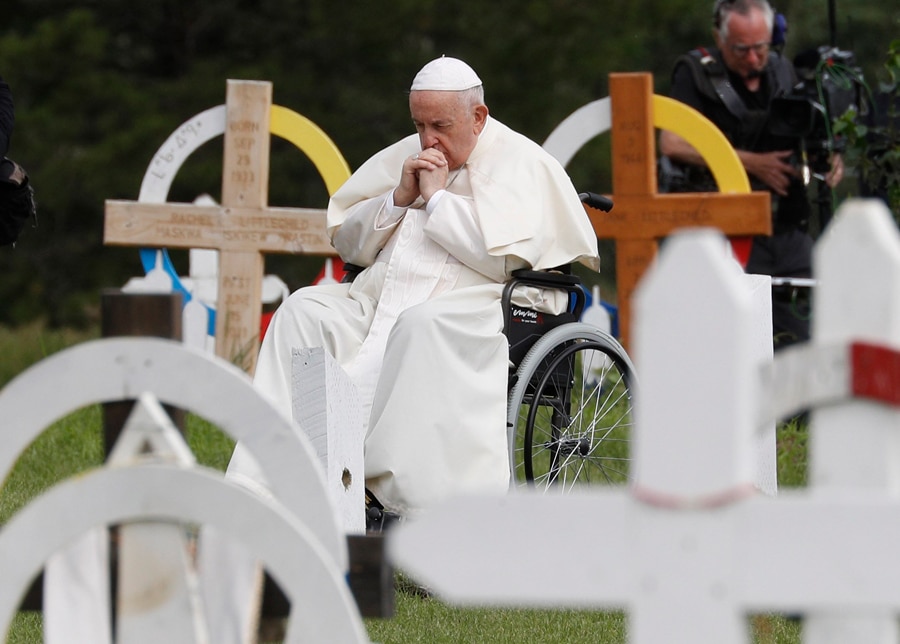 The small shoes were not among indigenous artifacts found in Vatican museums, but rather something that Marie-Anne de Walker-Pelletier, Chief of the Oakenese First Nation in Saskatchewan, discussed with Pope Francis in March to consider and pray for the indigenous was left for. Children who were placed under house arrest and especially those who never returned home.

Near the former site of one of Canada’s largest residential schools, on treaty land of the Erminskin Cree Nation, Samson Cree Nation, Louis Bull Tribe and Montana First Nation, Pope Francis said, “I humbly apologize for the wrong done by them. I’m sorry. So many Christians against indigenous people”.

“The first step of my penitent pilgrimage among you is to once again ask for your forgiveness, to tell you once again that I am deeply sorry,” the Pope said on July 25.

“I’m sorry,” he said again. “I apologize, in particular, of the manner in which many members of the Church and religious communities cooperated, particularly through their indifference, in the projects of cultural destruction and forced assimilation promoted by the governments of the time, whose The culmination took place in the residential school.

The Pope spoke in Spanish. When his words of apology were read out in English, the crowd responded with applause.

Canada’s Governor General Mary Simon and Prime Minister Justin Trudeau attended. But the dignitaries were popes and indigenous heads of state throughout Canada.

The local master of ceremonies explained that the cacique should be warriors who protect the indigenous, language, customs and children.

Before the Pope arrived, Ruby Rose Henry of Tlamin Nation warmed her drums and vocals with fire. She hoped to sing “Wildflower Song” for the Pope.

When government officials came to the village to take the children to a residential school, they said, “The children will run away and hide.” While the officials were leaving, “the children would sing this song to let the parents know they were not kidnapped.” Has happened.”

The Pope began his visit by meeting with clergy staff and some parishioners at the Church of Our Lady of Seven Sorrows before stopping to pray at the Erminskine Cree Nation Cemetery and then on his way to the former Erminskine Indian residential site in a wheelchair. school.

Five tipi were erected on the site, four of them to represent each of the nations living in Maskavasis, and a fifth as the emblem of the school.

Pope Francis described his visit to Canada on July 24-29 as an “atonement pilgrimage” to apologize for the trauma caused to Indigenous children by the many priests and nuns who run nearly 60% of Canada’s government schools. is for.

The government now estimates that at least 150,000 First Nations, Inuit and Métis children were separated from their families and communities and forced to attend schools between 1870 and 1997.

At least 4,120 children were killed in schools and several thousand disappeared without a trace.

As the meeting with the Pope began, dozens of people in the crowd carried tall red banners.

The banner had the names of each of the 4,120 dead children and the name of the school where they died.

In schools, students were banned from speaking their native language or following their traditions. The government provided so little funding that students often became malnourished, and many faced emotional, physical or sexual abuse.

The discovery of unmarked graves and possible cemeteries in various locations across Canada in 2021 brought attention to the legacy of residential schools and increased pressure on Pope Francis to apologize to members of the church on Canadian soil.

Ernest Durocher, a member of the Métis Nation Saskatchewan and a survivor of the Ile-ए-la-Crosse residential school, traveled to Maskawasis with his wife, who was also a survivor. He sat alone outside the Pauwa ground for a while, just thinking, he said.

“I look forward to hearing an apology from the Pope,” he said.

Emily McKinney, 21, a member of the Swan Lake First Nation, traveled to Maskawasis from the Treaty 1 area in Manitoba, where she chairs the Treaty 1 Youth Council.

Read Also:  After 3 surgeries and 21 months, Edmund is ready to return to singles. ATP Tours | Tennis

“I look forward to hearing a sincere and genuine apology to those who need to heal intergenerational trauma,” he said.

He said the schools’ policy separated parents and children. “It was not natural, but by force, and for seven generations! The effects are vast and painful.”

“These children were raised in institutions. How are they supposed to know how to raise their families with love, kindness and our teachings?” He asked.

Pope Francis called the Church’s involvement in the “reprehensible evil” of suppressing native languages ​​and cultures, the destruction of family and community ties, and the trauma suffered by children in schools and often passed on to their children and grandchildren in the form of deprivation. accepted. of affection or abuse.

Chief Cree Wilton Littlechild, 78, a survivor of the Erminescan residential school, who had traveled to Rome to meet Pope Francis in March, welcomed him to his home.

A lawyer and politician, Littlechild told Pope that as a member of Canada’s Truth and Reconciliation Commission, he had heard “nearly 7,000 testimonies from residential school alumni” across Canada. He said that people gathered in Muskavasis, they represented everyone.

After Pope Francis’ speech, Gerry Saddleback offered a “song of honour”. The Canadian organizers stated that the song was intended to show “openness and, to some, an acknowledgment of the Holy Father’s apology and (is) an invitation to all attendees to accept it, in their own way and according to their individual timeline.” One way is an invitation to forgive.

The Pope promised the Church’s cooperation in continuing the investigation into what happened in the schools and walking with the survivors on their journey to healing.

“In this first leg of my journey,” said the Pope, “I want to make room for memory. Here, today, I am with you, to cry with you, to remember the past, to shake our heads as one. Together to bow in silence and to pray before the graves”.

Life sentence for a Canadian member of Islamic State