Inauguration of Department of Computing and Technology in Vocational Schools

The General Directorate of Vocational Schools of the Armed Forces and National Police (DIGEV) inaugurated its Department of Computing and Technology to facilitate the optimal functioning of all its activities and processes for its external internal audience.

Through a press release, the training institute specified that with the refurbishment and modernization of that department, it would allow automation and integration of all processes of its 34 dependencies at the national level and central headquarters.

The inauguration ceremony of the renovated facilities was led by the director of that institution, Major General, ERD, Juan José Otano Jiménez; who emphasized that the action plan is part of the Transformation Policy for Techno-Vocational Education outlined by President Luis Abinador and endorsed by the Minister of Defence, Lieutenant General Carlos Luciano Diaz Morfa.

The transformation process began in March 2021, and involved the development of a number of projects and automation processes aimed at guaranteeing optimal learning across all training units as well as ensuring that all teachers achieve high-quality teaching excellence. are ready for.

Reportedly, one of the technical modernization works undertaken by DIGEV is the setting up of a data center which acts as a matrix to install, configure, manage and share all the automation platforms.

He indicated that internet capability has been augmented in all vocational schools in the country with an aim to facilitate optimum operation in all automation processes. The physical area of ​​the Department of Computing and Technology was also revamped.

He said that an innovative web system has been implemented which works for registration and control of students, from their registration till the end of their class cycle, keeping complete track of records of tordees, absences and grades.
This system automatically monitors, reviews and calculates the behavior of the said students and if they follow all the established rules, the same system automatically generates a graduation certificate for the student at the end of the course , and said certificate will be ready. With a digital signature along with a QR code, where he and/or the student will be able to access our platform along with his/her ID number and print his/her certificate at a place he/she deems relevant, he highlighted. 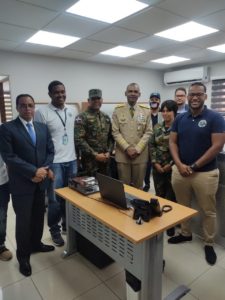 Major General Otano Jiménez ERD reported that a new cellular fleet was put into operation, where any telephone extension could be called for free not only from the central headquarters, but from any of the 34 vocational schools in the country. , You can make free calls to any cellular fleet from any fixed telephone extension.
He explained that a virtual server was configured and installed that would automatically backup and/or act as a backup system in the cloud so that in the event of our physical server failing for some reason, it would log in there and therefore all Users will be able to continue working normally from the cloud.

He said that with the objective of guaranteeing good education in all vocational schools, SIGEV platform was acquired with 1,096 licenses so that teachers from different regions can teach virtual classes.