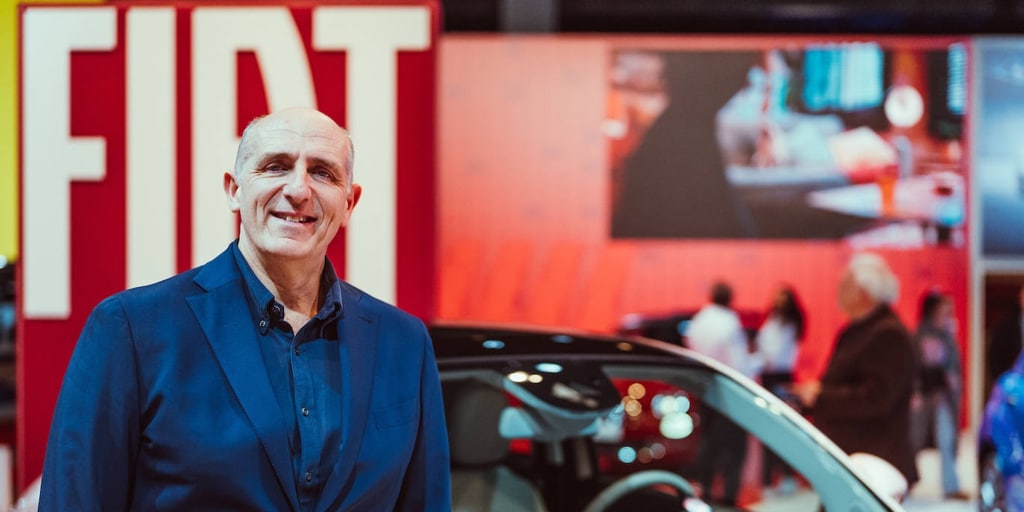 Gaetano Thorel He is the manager of people who want to develop their career in the automotive world. After spending more than two decades at Ford of Europe, the Italian became CEO of FCA Germany and then PSA Italy, so that by merging the two groups, the only thing left was to occupy a relevant position in Stellantis. There, as vice president and head of Fiat and Abarth in Europe, he is experiencing a sweet moment: Its brands have the highest volume Within the French-Italian-American consortium and ahead of the German or French brands, the 500e has become the third best-selling electric model on the continent.

At the Brussels Motor Show, he meets with ABC to review the challenges of electrifying their emblem, which has specifically proposed zero emissions from 2027, “if no unforeseen events occur.”

Do you think electrification imposed by European institutions will be beneficial or harmful for Fiat in the long run?

carlos tavares You have said many times that we are an industry that has to follow the rules imposed on us, whether we like it or not. Brussels has set the end of the combustion engine for 2035. We have 12 years ahead, absolutely average for a European mobile fleet. This transition is not dependent on manufacturers alone, but also requires incentives from governments to drive demand and charging infrastructure to keep pace with sales. When thinking about an electric car, there are still mental barriers of price, autonomy and the recharging process.

Incentives are important and there are governments with long-term plans, such as Germany, which said “By the end of 2022 you will have 6,000 euros and another 3,000 from the brand to spend them however you want”, in 2023 they will continue to aid, but less. It is logical that these decrease as adoption increases, but there is a way out with clear goals.

Instead, Italy and Spain have a fund that is distributed until it runs out and then it is decided whether it has been effective and they repeat. Germany ends 2022 with more than 20% market share for electric cars and France. in Italy and Spain it is less than 10%, The question is how can we help customers make this transition. This model is a short-term vision and it seems to me that it is one of the reasons why the mix of electricity in Southern Europe is well below the Community average.

For Fiat, moving towards zero emissions is a matter of social responsibility, it is our contribution to protect the planet and it is easy to imagine that there will be a big change in electricity in cities.

How does Fiat intend to make electric mobility affordable?

Harnessing the industrial power of Stellantis and trying to drive down battery costs is important, but it is essential that governments smooth the transition with support. For our part, we’ve always wanted to be an affordable brand, which will always be in our DNA, but that doesn’t mean we have to be boring.

Fiat 550e doubles its sales in 2022. Has it exceeded initial expectations?

I’ll be very honest. If someone had told me 12 months ago that the 500e had risen to the third best-selling electric car in Europe, I would not have believed it. It was to be expected that we were the best seller in Italy, we were second in Spain and third in Germany ahead of Volkswagen. People love this car very much. It’s an icon and drivers are happy to use it on a daily basis. Fiat clearly represents ‘la dolce vita’ and has the Italian and friendly touches that are part of its success. So, we have decided to launch it in Japan, South America and USA. The new Abarth 500e is nothing more than the best version of the model.

There are many unknowns to exercise. It hasn’t started off too bright, let’s say. We will focus on building on the success of the 500 and specifically supplying to countries that have received orders in the past. We sold 67,000 cars, all built by us. In 2022, we prioritized a few markets: Germany for incentives, Italy to be home, Spain… However, there was a lot of territory left to play, which affected our results.

There are countries, such as Norway, which are reducing incentives for electric cars. Is it possible that other countries do something similar before their aid takes effect?

Keep in mind that Norway started this change 10 years ago, long before everyone else. They set themselves the goal of being an exclusively electric country in 2025 and have taken the necessary steps so that 80% of their sales are zero-emission by 2022. Now that they want to reinstate taxes for EVs, the question is what should be the taxes driving the vehicles? Other countries should look to the Norwegian model for an example of how things should be done.

How does Fiat’s commercial vehicle strategy fit into Stellantis’ strategy?

It is very simple. One of the main strengths of Stellantis is its portfolio and we represent the power of diversity in both passenger cars and commercials. In light commercials, we have Fiat, Peugeot, Citroën and Opel, four brands that are references in different sectors. For example, Fiat is the undisputed leader in the world of campervans, with the Ducato being the benchmark. It’s not only about technology and reliability, but also about a network of workshops throughout Europe. The beauty of Stellantis is that we have the possibility to play with four brands in each segment and geographically, betting on a powerful symbol in each country. Our job is to maximize Stellantis’ performance in each market.

industrially, Four different models can be developed from a single platform, each with their own market niche. The aim is to make the group the market leader in commercial vehicles, and the Fiat Professional is one of the pillars towards this goal.

Is that why you’re betting so heavily on the Fiat Doblo?

The new Doblo and Scudo are the first ‘gifts’ that Stellantis gave to Fiat, the first models that were born after the merger of FCA and PSA. Earlier, we did not have much success with models outside Ducato and now we are seeing very positive results. The biggest concern is internal cannibalism, but our goal will always be to try to gain market share outside Stellantis and Renault and Ford are really the strongest rivals we are facing.

Do combustion engines still have a place in the world of advertising?

Commercials are also in transition to electric, but they have a different rhythm. Zero-emission versions of the Doblo, Scudo and Ducato are already available, but more heat engines are still being sold. A curious fact is that the world of commercials has no hybrid solution: it’s going straight to electric drive. We all have a planned time horizon and if all goes well at Fiat, in January 2027 our cars will be electric only. It’s too early to set a date in the world of advertising, we’ll have to see how demand develops.