Incidence and mortality of COVID-19 down due to use of face masks: Health 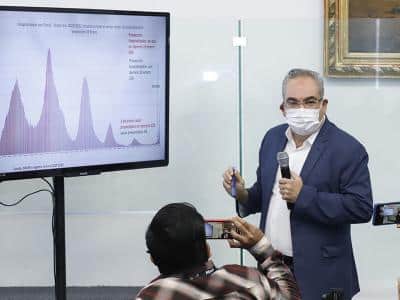 Incidence and mortality of COVID-19 down due to use of face masks: Health

-The head of the agency said that due to this policy, the number of cases of influenza in Puebla decreased to 6.3 per day.

City of Puebla, Pu. , The Secretary of Health, José Antonio Martínez García, highlighted that thanks to the public policy on the use of face masks, Puebla ranks 25th nationally in the incidence rate of COVID-19, while the death rate for the disease This site is in 30; In both measurements the unit is below the average in the country.

In a press conference led by Governor Sergio Salomon Céspedes Peregrina, the head of the agency explained the epidemiological behavior of the fifth and sixth waves of infection, for which he stressed that the public policies and health actions implemented by the state were efficient. and effective in breaking the chain of transmission of the virus.

In this sense, he specified that during the weekend there were 414 new coronavirus infections; He reported that the new infections were recorded as follows: Friday, 229; Saturday, 147 and Sunday, 38.

Similarly, he mentioned that there are 1,478 active cases of SARS-CoV-2 spread across 52 municipalities and are hospitalized.

He said that a rise in hospitalization cases has been recorded, as 48 people are hospitalized due to the disease; Two of them required assisted mechanical ventilation.

In regards to the deaths, he announced that there were two deaths. The first was an 86-year-old man, unvaccinated and diabetic, while the second death was of a 92-year-old woman who had received a single dose of the COVID vaccine and had co-morbidities.

Regarding seasonal cold diseases like influenza, the head of health services pointed out that, despite being within the first 10 places in the national index, the use of face masks has managed to register a decline in confirmed cases. In eight sick people, it decreased to 6.3 patients per day. In the same subject, he mentions that the unit ranks sixth in mortality.

He recalled that the vaccination day against this seasonal disease is still in force, as the inflow of applicants is less than 50 percent of the estimated target of over 989 thousand doses.

According to the guidelines the age groups that can be vaccinated against influenza are: children under the age of 5 years, but over the age of 6 months; Before 5 to 59 years of age, 60 years and above, pregnant women, lactating mothers and health workers.