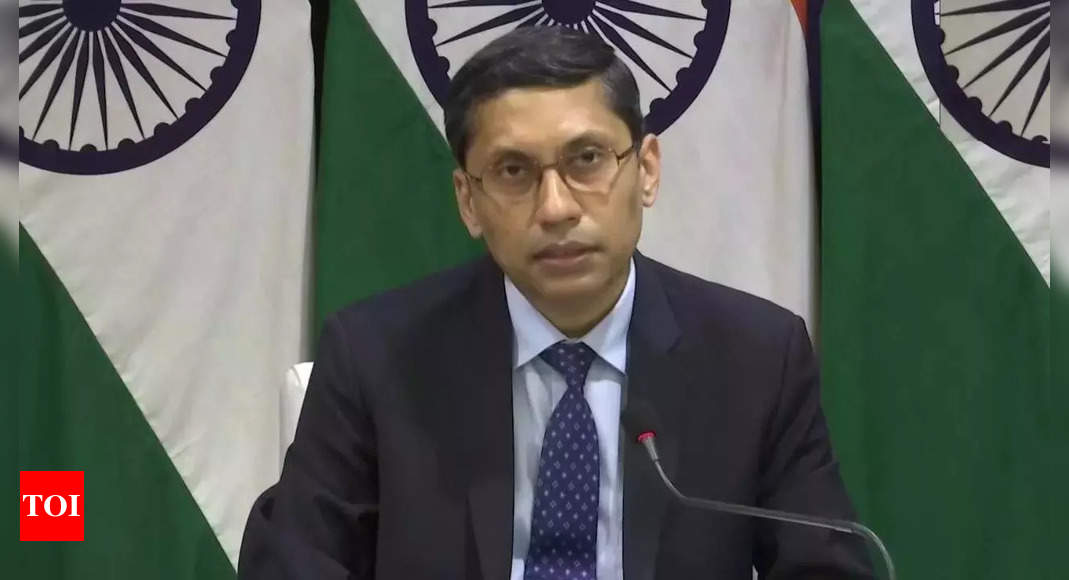 NEW DELHI: India on Thursday resumed its diplomatic presence in Kabul by deploying a team to its embassy in the Afghan capital after it forced its officials out of missions after the Taliban seized power.
foreign Ministry (MEA) said in a statement that an Indian technical team has reached Kabul on Thursday and has been deployed at the embassy there.
Three weeks after the re-opening of the embassy, ​​an Indian team led by JP Singh, the foreign ministry’s point person for Afghanistan, visited Kabul and met acting foreign minister Mawlawi Amir Khan Muttaki and some other members of the Taliban.
It is learned that the Taliban side had assured the Indian team that adequate security would be provided if India sends its officials to the embassy in Kabul.
“In order to closely monitor and coordinate the efforts of various stakeholders for the effective delivery of humanitarian aid and to continue our engagement with the Afghan people, an Indian technical team has reached Kabul today and has been stationed at our embassy there. Has been.” Foreign Ministry said.
The MEA has been maintaining that the embassy was not closed as only officials based in India were brought back home and local staff continued to work in the mission.
Referring to the visit to Kabul by the Singh-led team, “Recently, another Indian team visited Kabul to oversee the distribution operations of our humanitarian aid to Afghanistan and met senior members of the Taliban.”
The Ministry of External Affairs said in a statement that the security situation was also assessed during that team’s visit.
“Our longstanding ties with Afghan society and our development partnership, including humanitarian assistance to the people of Afghanistan, will continue to guide our vision,” the foreign ministry said.
It said that India has historical and civilizational ties with the people of Afghanistan.
People familiar with developments said India has decided to re-establish its diplomatic presence in Kabul in view of its strategic interests.
When the Singh-led team visited Kabul, it was sad that it was intended to oversee the distribution of India’s humanitarian aid and meet with senior members of the Taliban.
Following the team meeting with Muttaki on June 2, Afghan Foreign Ministry spokesman Abdul Kahar Balkhi said that Muttaki emphasized India’s diplomatic presence as well as the provision of consular services to Afghans.
The Acting Foreign Minister welcomed the delegation to Kabul, calling it “a good start” in relations between the two sides.
Those quoted above said that the Taliban was signaling to India that its diplomatic presence would be welcomed.
In September last year, following the Taliban’s takeover of Kabul, India’s envoy to Qatar Deepak Mittal met senior Taliban leader Sher Mohammad Abbas Stankzai at the Indian Embassy in Doha.
In a related development, India on Thursday sent relief material for earthquake-hit people in Afghanistan.
The aid was sent a day after India committed to providing aid and assistance to Afghanistan in its “hour of need” when a powerful earthquake struck the war-torn country, killing nearly 1,000 people.
“The first consignment of India’s earthquake relief aid to the people of Afghanistan reaches Kabul. It is being handed over there by the Indian team. The next consignment is as follows,” the MEA spokesperson said. Arindam Bagchi tweeted.
In the last few months, India has supplied several consignments of humanitarian aid to Afghanistan.
India has been advocating for providing uninterrupted humanitarian assistance to Afghanistan to deal with the humanitarian crisis facing the country.
It has not yet recognized Taliban rule in Afghanistan.
Concerned by developments in Afghanistan, India last November hosted a regional dialogue on the country’s situation in which the NSAs of Russia, Iran, Kazakhstan, Kyrgyzstan, Tajikistan, Turkmenistan and Uzbekistan participated.
The participating countries vowed to work towards ensuring that Afghanistan does not become a safe haven for global terrorism and called for an “open and truly inclusive” government in Kabul with representation from all sections of Afghan society. called for the formation.
Read Also:  Taliban fundamentalists turn the clock in Afghanistan

‘I didn’t think the game wanted me anymore’

Analysis: Investor pressure for a bigger drop in China

To catch up: Utah and Oregon chase Pac-12 division titles