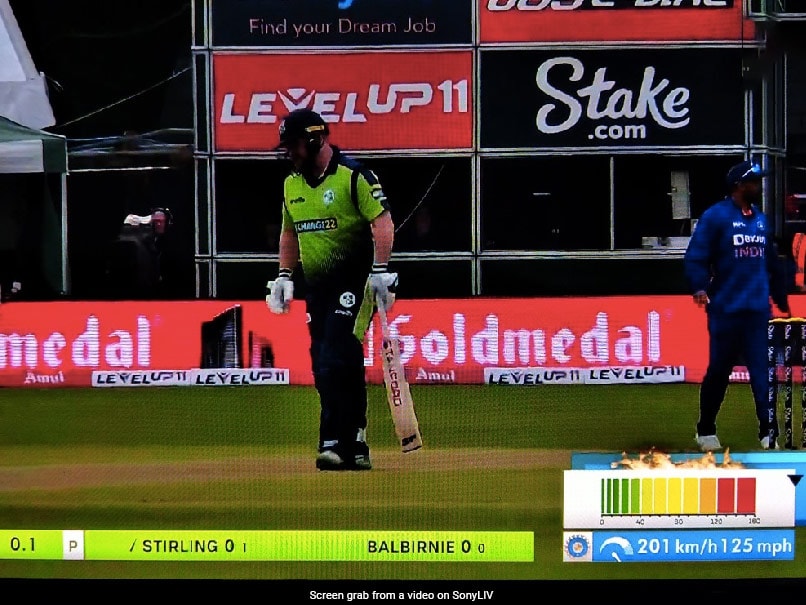 India beat Ireland by seven wickets in the first T20I of the two-match series between the two sides on Sunday. Chasing a target of 109 runs in a rain-hit game, India reached home with 16 balls to spare. Fast bowler Umran Malik also made his India debut in a 12-over-a-side match in Dublin. Where everyone was expecting Umran to show off his fast bowling, it was Bhuvneshwar Kumar, who hogged the limelight for his pace.

Ireland won the toss and decided to bat first. Paul Stirling and Andrew Balbirnie opened the innings. Sterling faced Bhuvneshwar’s first ball and it took everyone by surprise as the speed gun showed that the delivery was bowled at 201 kmph.

While it was a clear case of an error from Speed ​​Gun, it did give netizens a chance to have some fun. Here are some reactions:

Bhuvneshwar Kumar was bowled at 200+ KPH during the first T20I against Ireland in Dublin. #IREvIND pic.twitter.com/ZnIJAHYf1z

Captain Rohit Sharma knows how to bring out the best of his players.
Bhuvi is invincible since that incident. #IREvIND pic.twitter.com/0YcxXHbw0H

It is worth noting that former Pakistan fast bowler Shoaib Akhtar holds the record of bowling the fastest ball in international cricket. He had caught a speed of 161.3 kmph.

While Bhuvneshwar returned figures of 1/16 in his three overs on Sunday, it was not a memorable start for Umran Malik, who conceded 14 runs in his first over and did not get a chance to bowl after that.

Hardik Pandya, who is leading India for the first time after the match, said that he feels Umran Malik should bowl with the old ball.

Talking about the game, it was Harry Tector’s unbeaten 33 that helped Ireland reach 108/4 in the allotted 12 overs. Bhuvneshwar, Hardik Pandya, Avesh Khan and Yuzvendra Chahal shared a wicket each.

In return, India reached home with seven wickets and 16 balls to spare. Deepak Hooda led the scorers chart with the help of 47 not out off 29 balls with the help of two sixes and six fours. Ishan Kishan (26 off 11) and Hardik (24 off 12) also helped the team.

Read Also:  Coco Gough wins the title and then she wins another.

The second and final T20 match between India and Ireland will be played at the same ground on June 28.