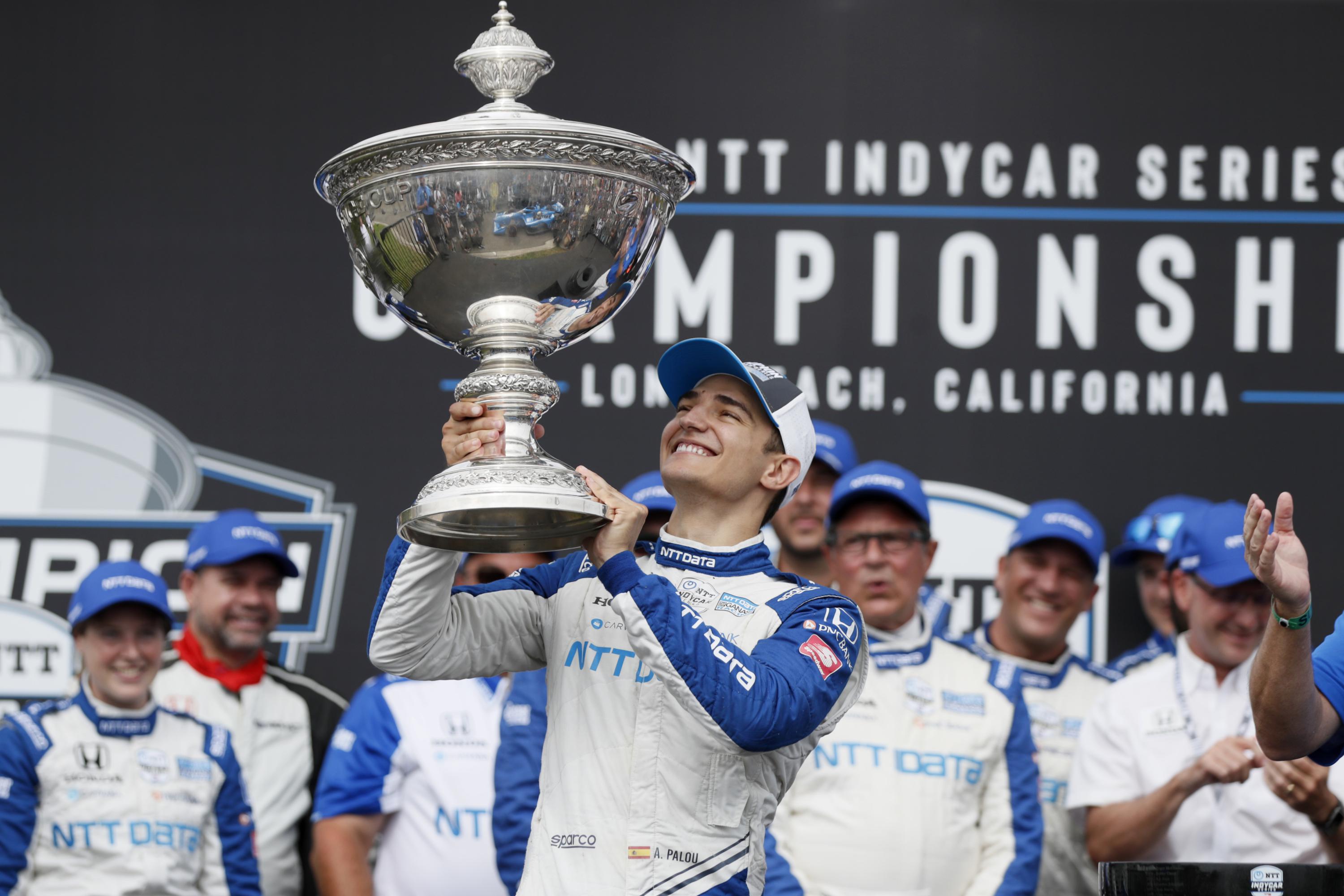 ST. PETERSBURG, Fla. ( Associated Press) — The stars of IndyCar crowded into Indianapolis Motor Speedway to celebrate an upcoming season of opportunity for America’s open-wheel racing series to further cement its legitimacy and expand its popularity.

The party to mark the 100-day countdown to the Indianapolis 500 went off course amid word Michael Andretti was again trying to acquire a Formula One team. Mario Andretti, the 1978 F1 world champion, wrote that Andretti Global had applied for an expansion team to launch in 2024 — news so very indicative of IndyCar’s pecular dilemma.

IndyCar has weathered the pandemic under Roger Penske, who had the misfortune of purchasing the series and IMS about two months before the global shutdown. Despite the challenges, Penske enters his third season at the top with all critical metrics trending upward.

IndyCar’s growth can be attributed to a crop of young stars — a Dutch driver, a Mexican, a Spaniard and 21-year-old Colton Herta of California — who won races and new fans. IndyCar’s growth has made it a respectable and even desirable landing spot for top drivers around the globe, but the bright young lights of IndyCar’s resurgence all happened to grow up dreaming of F1.

If Michael Andretti ever does get an F1 team, he is almost certain to take Herta from Andretti Autosport with him as the next American driver. Herta was a central figure in last year’s failed Andretti talks to purchase Sauber, and as he prepares this Sunday to defend his St. Petersburg victory from a year ago, he’s again in the headlines for the wrong series.

“It’s the same as how I was with the Sauber stuff, it doesn’t really make too much of a difference to me,” Herta told The Associated Press on Tuesday. “My main goal this year is IndyCar and that’s what I’m focused on. If something were to happen with Formula One, I’d have to take a good look at it. But when I’m contracted to drive something, that what I put 95% of my energy into.”

Pato O’Ward, a 22-year-old Mexican, races for McLaren in IndyCar and seems to already have one foot out the door. He tested the F1 car for McLaren in December and could be the team’s reserve driver at select 2022 races.

Herta and O’Ward, teammates in January on a class victory at the Rolex 24 at Daytona, have established themselves as motorsports’ new guard. Losing them to F1, the hottest property in motorsports right now, hangs over an IndyCar community banking on all the new faces to carry the series forward.

For all the attention on a pair of drivers who both fell short of the IndyCar championship, they are still scraping together the points the FIA ​​requires to get an F1 drivers license. Of all the emerging stars, the one to finally dethrone six-time IndyCar champion Scott Dixon last season was Alex Palou — Dixon’s Chip Ganassi Racing teammate.

Palou was new to Ganassi last season but in his second year of IndyCar, and the 24-year-old Spaniard has a remarkable steeliness and relentless thirst to understand every element of his craft. He won his debut race with Ganassi last season, finished second to Helio Castroneves in the Indy 500 and rebounded from consecutive DNF’s to win at Portland and reclaim the championship lead for good with two races remaining.

With the attention always seemingly elsewhere, Palou’s season was somewhat under the radar.

“We didn’t surprise people last year, but they didn’t really talk about us either,” Palou said. “We need to be consistently part of the conversation so that people understand clearly this team is for real.”

Rinus VeeKay, who turned 21 last fall, was another one of IndyCar’s breakout first-time winners and returns with Ed Carpenter Racing. The Dutchman’s on-track results weren’t the same after he broke his collarbone in a bicycle crash, and there’s a ton of young talent looking for IndyCar seats.

Some of the new faces in IndyCar came from F1 as curiosity in the IndyCar Series has been piqued since Alexander Rossi defected in 2016 and Fernando Alonso has entered the Indy 500 three times.

Marcus Ericsson left F1 for IndyCar in 2019 and returns for a fourth season (third with Ganassi) after two wins last year time with an Indianapolis 500 entry.

There’s so much new talent that reigning Indy Lights champion Kyle Kirkwood, a 23-year-old American, nearly found himself without a seat. He has been developed by Andretti Autosport but his path with that team required Herta to move to F1; when Andretti didn’t complete the Sauber deal, Kirkwood became available to AJ Foyt Racing.

David Malukas, the 20-year-old Indy Lights runner-up, moved with his father’s backing into a Dale Coyne Racing ride and the driver from the Chicago area gives IndyCar two new Americans.

Devlin DeFrancesco, who races under the Canadian flag, moved up alongside Kirkwood and Malukas to put three graduates of the Road to Indy ladder system into the big leagues. The trio enters IndyCar at the same time as three completely new faces:

— Tatiana Calderon with Foyt will be IndyCar’s only fulltime female driver; at 28, the Colombian will be the oldest rookie in the class.

— Callum Illot, an F1 test driver for Alfo Romeo, was so inspired by Romain Grosjean’s renewed energy as an IndyCar rookie last year that he signed on with new team Juncos Hollinger Racing, which gives IndyCar its largest entry list in a decade with 26 full -time cars.

Penske said he is increasing by 30% the leaders circle guaranteed payout by IndyCar to the top 22 teams in the standings, and expected the Indy 500 purse to be “higher than it was before.” The purse for last year’s race was just under $9 million.

“The one thing we’re going to do is try to provide support to all of our leaders circle teams. We have good teams and we need to support them,” Penske told Associated Press. “The lights are on and the stores are open.”

The series is opening a new three-year deal with NBC Sports, which pulled in its highest IndyCar ratings last season since acquiring the property in 2019. A series-high 13 races this year will be on the flagship broadcast network rather than cable. Telemundo Deportes has planned live Spanish-language coverage of three races starting with Sunday’s opener in St. Pete, and IndyCar says it has deals in more than 200 countries and territories.

The search for a third manufacturer is ongoing and Penske said talks are furthest along with Toyota after IndyCar’s courtship of Ferrari fizzled. It Toyota returns, it is expected to partner with Vasser Sullivan Racing.

“They have not said no or go away,” Penske said of Toyota. “I think what they are trying to do is see how it fits in their own total motorsports package on a worldwide basis. But there’s definitely interest there and it would be a home run to get a third manufacturer here, someone we could announce over the next season.”

The competition is so good that both Castroneves and Simon Pagenaud turned down other opportunities because Meyer Shank Racing was willing to build around them in IndyCar.

Castroneves took a job with Shank after three seasons away from IndyCar driving for Penske in IMSA; Penske wanted Pagenaud to take an IMSA seat so the team could shrink to three IndyCar entries.

“The rules allow your talent to show,” Castroneves said. “IndyCar is where I wanted to be all along.”

As for the F1 appeal to those young drivers, Penske driver Will Power said he understands the pull Herta and O’Ward are feeling right now.

“Formula One is the pinnacle when you look at the level of money and television coverage around the world,” he said. “If you’re a young driver, it’s somewhere you would love to go.”

But it won’t be the same experience as IndyCar, on or off the track.

“There’s no other open wheel series in the world like IndyCar,” Power said. “Just look at the practice sheets and the qualifying times. You can mathematically work that out yourself, that IndyCar is more competitive than Formula One.

Lady Gaga has to cancel the concert

DiCaprio shares his secret with Chalamet

She is the oldest queen in British history, who ruled for 7 decades