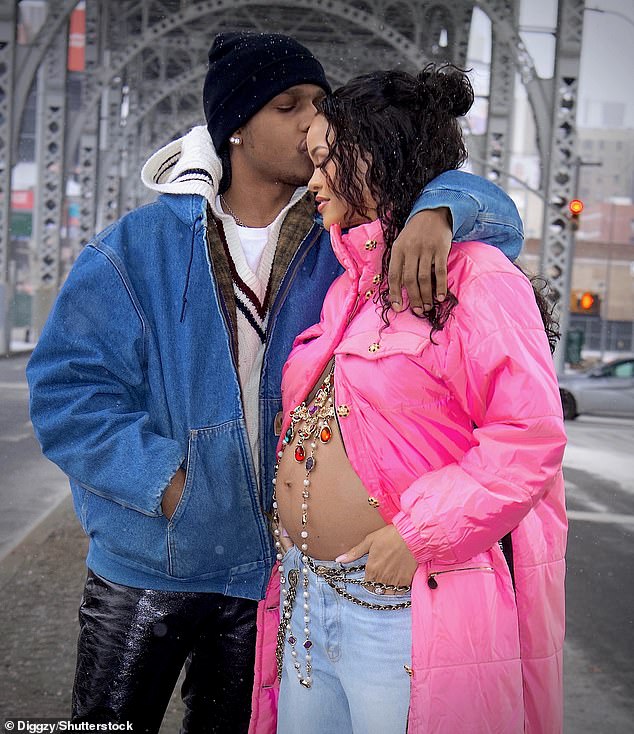 They announced they were expecting their first child together last week, sending a buzz of excitement throughout their social media fanbase.

But prior to becoming parents to be, Rihanna and her boyfriend A$AP Rocky began dating in November 2020, after years of being close friends – during which time he was reportedly ‘infactuated’ with her.

Rihanna, 33, and Rocky, also 33, shared their baby news with a striking photoshoot as the singer bared her blossoming baby bump and in an open pink coat, during a walk through the streets of New York.

Baby joy: Rihanna and her boyfriend A$AP Rocky began dating in November 2020, after years of being close friends – during which time he was reportedly ‘infactuated’ with her (pictured in the pregnancy announcement)

The Bajan star and the New York native were first linked when they worked on a few collaborations together, including Cockiness (I Love It, 2011) which appears on her album, Talk That Talk.

The performers joined forces at the MTV VMAs in 2012 and treated fans to a rendition of their track during the live show.

Rihanna once again enlisted the help of the rapper a year later when she asked him to open for her on the Diamonds World Tour.

Before his romance with Rihanna, Rocky is known to have a checked past, including falling in with drugs at a young age, his father being jailed for dealing when he was 12 and his brother being muredered a year later. 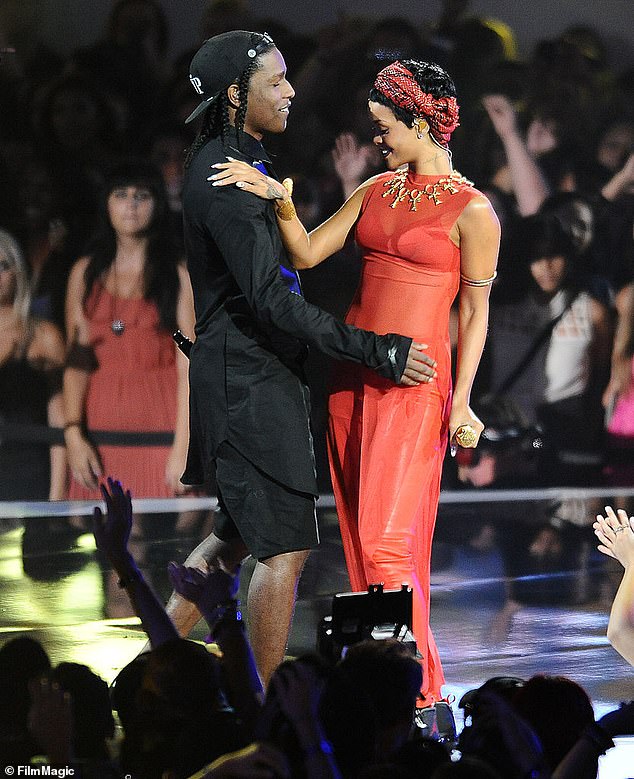 Just pals! The performers joined forces at the MTV VMAs in 2012 and treated fans to a rendition of their track during the live show (pictured at the time)

He previously revealed: ‘Our school was three blocks away, and they used to let us out for lunch, for 45 minutes. The first time was in this apartment building. We took the elevator to the roof, and everybody put their coats on the ground.

‘The women I’m around are into that free-spirited s**t like me. These are things people like to stay away from, that they don’t like to admit. But I can’t be embarrassed about it.’ 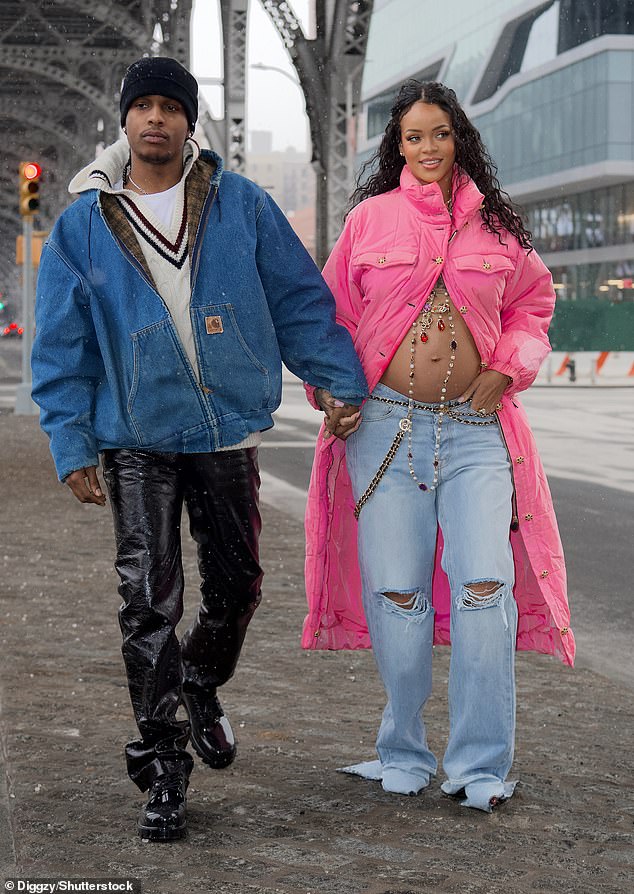 Big reveal! Rihanna, 33, and Rocky, also 33, shared their baby news with a striking photoshoot as the singer bared her blossoming baby bump and in an open pink coat, as the couple walked through the streets of New York

ASAP, whose previous list of romances includes singer Rita Ora, also wrote a song about oral sex with the star and slated her performance in the bedroom.

Rita later hit back on US radio, telling an interviewer: ‘I don’t care what you say about me. I don’t give a flying f***. That’s just how it is. I’m very happy with what I do and I’m proud of who I am and what I represent.’

Read Also:  The vaccine that spreads immunity by passing itself on like a virus

However he seemed unfazed by the breach and was instead concerned about people criticizing his ability as a lover, as fans branded him ‘disappointing’.

At the time he insisted that ‘a long list of satisfied women’ could vouch for him. 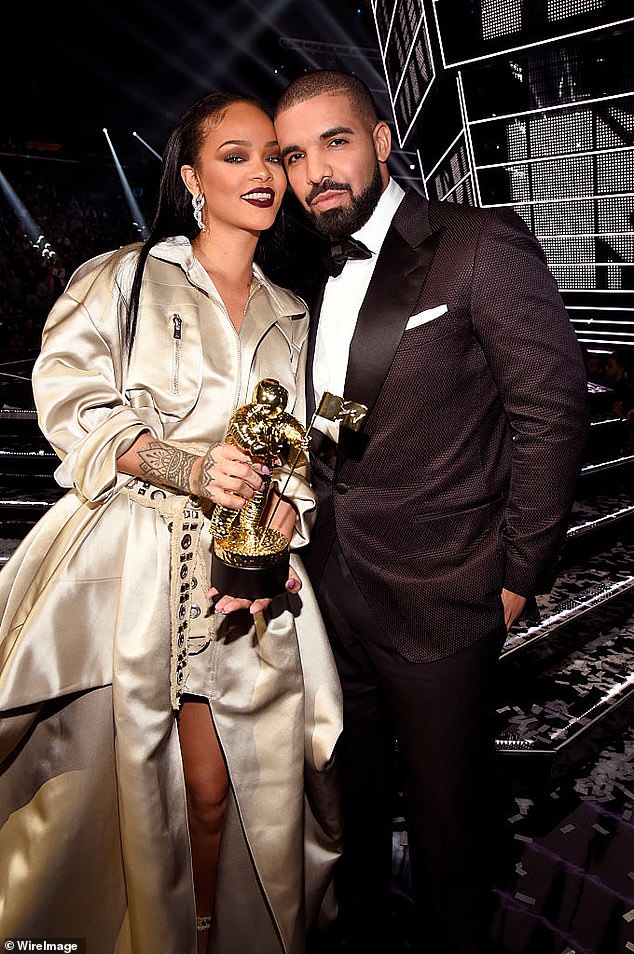 Love life: Rihanna has previously been linked to other reactions including Drake (pictured in 2016)

An industry source added: ‘In the rap world, highly sexualised lyrics and imagery is common, and he seemed more bothered about the idea that someone had suggested he wasn’t great in bed than the thought of his sex tape being leaked.

‘He clearly thinks a great deal of his appeal to ladies, but he’ll have met his match if he’s going to hold on to one of the world’s sexiest and most successful women.

‘Rihanna has every reason to be extremely confident about her own sex appeal. It will be interesting to see if he can cope with being on the back foot a bit for once.’

Tongues began wagging in 2019 when Rocky – real name Rakim Athelaston Mayers -joined Rihanna on the red carpet at the British Fashion Awards, which Rihanna shared to her Instagram page.

She wrote alongside the post: ‘And thank you @asaprocky for representing us on the carpet and always being so supportive of @Fenty!!’ 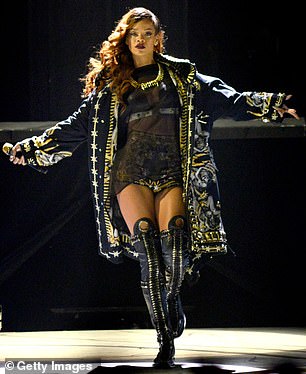 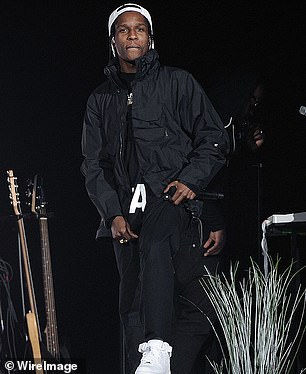 Music industry: Rihanna once again enlisted the help of the rapper a year later when she asked him to open for her on the Diamonds World Tour (pictured together in 2013)

Rihanna was still dating her long-term beau of three years Hassan Jameel at the time, however their split was announced a year later, further fueling rumors that she and Rocky were more than just close pals.

During this time Rihanna was also linked to fellow rappers Drake and Travis Scott.

A source told the Sun that the couple shared a suite during a trip to New York but the official line was that the singer was ‘just having fun’ with her new beau, because it was so soon after her last boyfriend.

In the July of 2020, ASAP featured in her Fenty Skin campaign and they did a joint chat with Vogue about their joint venture.

Just months later there were reports that the budding couple were ‘inseparable’ after Rocky joined Rihanna in Barbados over the Christmas period and met her family.

A source said: ‘It’s a new relationship, but they both seem very into it.’

ASAP confirmed their loved-up status during a profile for GQ in May 2021, where he described her as the ‘love of his life’ and ‘The One’.

He told the publication: ‘She amounts to probably, like, a million of the other ones’, he also discussed a road trip the couple went on in a massive bus and drove from Los Angeles to New York, stopping at Texas and Tennessee on the way.

In the foreboding chat, Rocky discussed what he would be like as a father, telling the publication: ‘I think I’d be an incredible, remarkably, overall amazing dad. I would have a very fly child. Very.’

The couple made their red carpet debut at the Met Gala in September 2021. 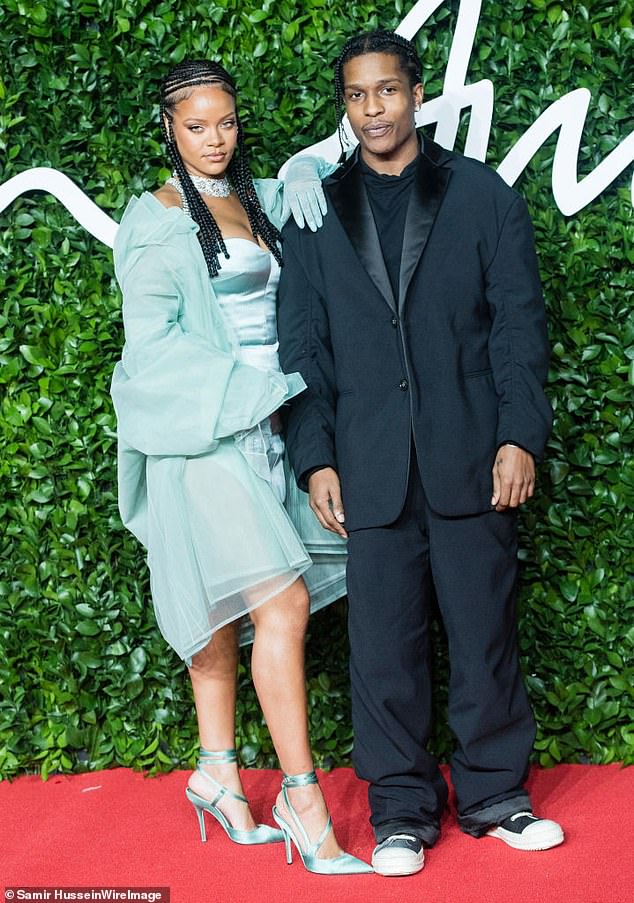 Date night? Tongues began wagging in 2019 when Rocky – real name Rakim Athelaston Mayers -joined Rihanna on the red carpet at the British Fashion Awards, which Rihanna shared to her Instagram page (pictured at the time)

Pregnancy speculation began to swirl during the beginning of this year when Rihanna and Rocky have been spotted out and about, with the star choosing to bundle up in big, baggy clothes.

While she reportedly denied rumors in a direct message to a fan, the rumor mill kicked up again when she was seen covering her stomach during a visit to Sephora.

Following their baby announcement, Rihanna’s father Ronald revealed how Rihanna had shared the news with her family before revealing the public snaps.

Her father, Ronald, later spoke of how Rihanna had told family members the weekend before she made the snaps public, 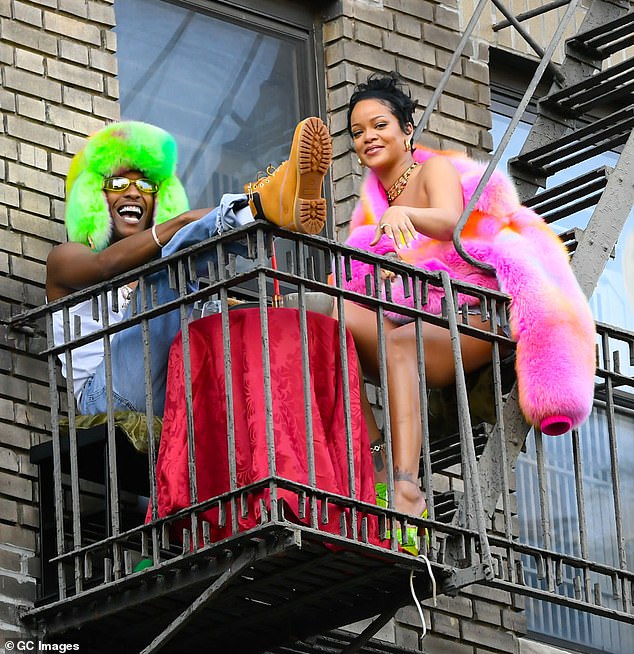 New music? : Rihanna and A$AP are seen filming a music video in the Bronx in July 2021

Rocky has had a troubled past with the law, and completed a short jail term in Sweden in 2019 for assault.

Prior to this, he served a setence in Rikers Island jail for drug dealing in 2006.

In 2012 he was arrested twice, once over a fight in New York and on another occassion after he allegedly assaulted two photographers.

In 2013, he was accused of slapping a woman at a music festival, but the dispute was settled out of court two years later.

A music source told the Sun: ‘This guy is a talent, but he is a livewire too, and the real question here is whether he can leave all of these incidents behind him and focus on starting a family, or whether they will flare up again.

‘He’s totally besotted with Rihanna, there’s no doubt about that. He’s barely left her side in two years and he knows this is the real deal, and she’s a very strong person herself.

‘She won’t stand for nonsense, but once a baby is in the mix he is going to have to dramatically change his behaviour.’ 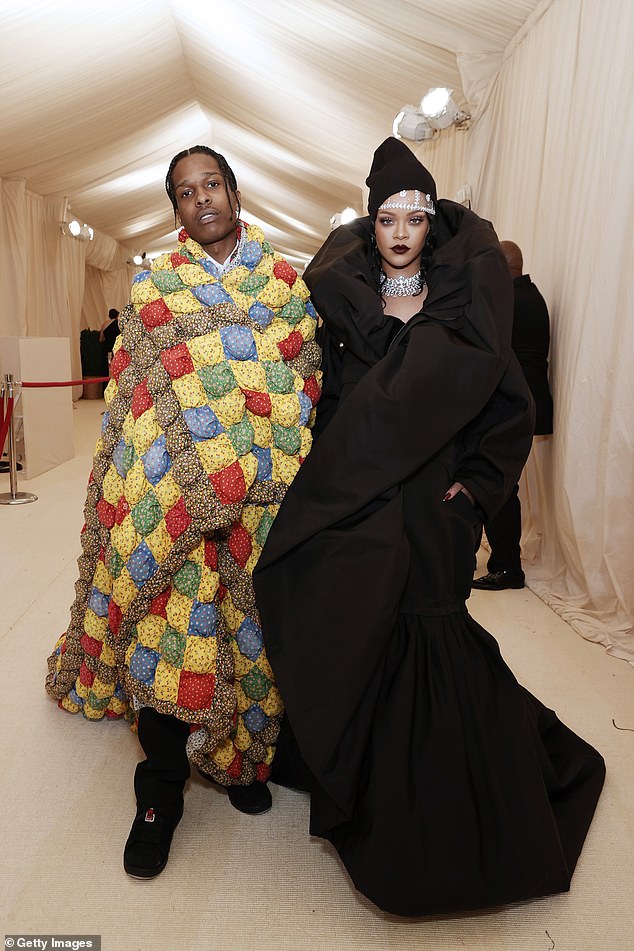 It’s official! The couple made their red carpet debut at the Met Gala in September 2021

Queen Elizabeth talks about family and loss over Christmas