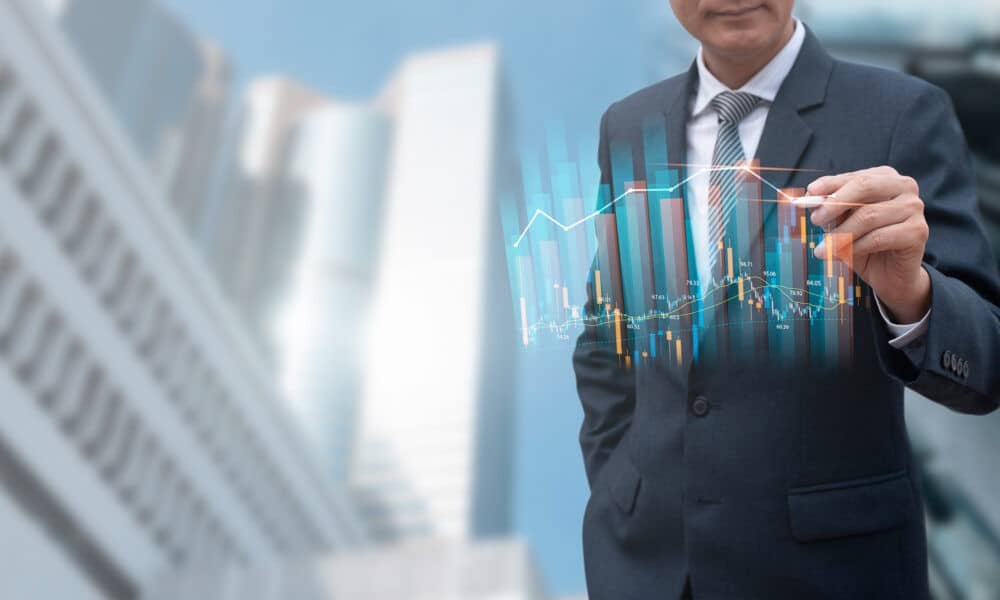 Equity and bond markets are down

The price of financial assets and economic data maintain links that can sometimes seem distant. The equity and bond markets experienced significant downward movements during the first quarter, which continued – albeit to a lesser extent – ​​in the second half. As of June 30, 2022, the euro zone government bond index and the Euro Stoxx 50 were down 9% and 14% respectively. These corrective movements took place in anticipation of economic movements that permeate our daily lives. The passage of bond rates into positive territory at the end of 2021 preceded by more than 6 months that of the 0.50 point increase in ECB rates on 21 July. Similarly, the fall in share prices in 2022 was carried out in anticipation of the impact of the economic cycle on the future results of companies. The 0.75 point rise in US Federal Reserve rates on July 27 had little impact on an already strong dollar and none on growth stocks (Nasdaq) which soared 4% on the same daytime. Indeed, the profitability provided by a financial portfolio is largely based on future economic conditions. This is the case for bonds whose current interest rate depends (in part) on the expected evolution of monetary policy. For equities, the evolution of future results will be a determining factor for the ex-post performance of investments made today.

Inflation still on the rise

Investors scrutinize economic data to establish perspectives that justify their investment decisions. This mode of operation inherent in the financial markets leads to a first observation: the price of assets can fluctuate in a counter-intuitive manner in relation to the changes visible through economic indicators. Thus, despite high and rising inflation figures in the Euro zone and the United States and central banks raising their key rates, bond yields have begun to fall significantly (0.70 rate points) since June 14 on both sides of the Atlantic. Inflation is certainly high, but half of it comes from the energy sector, agricultural prices and automobile prices (especially in the United States). Investors in the bond market, seeking to project themselves into the future, assume that these prices will stabilize. They observe for example that the price of oil (Brent) fluctuates around 105 dollars per barrel today against 122 dollars on March 8th. If prices remain at these levels throughout 2023, black gold will contribute to lowering inflation in 2023. These declines from the high points are also observed in metals, agricultural raw materials, freight. They are contributing to fueling expectations of an abatement of inflation by 2023. We should add that the normalization of monetary policy by central banks and the looming economic slowdown will also contribute to reducing the inflationary tensions observed on the stock market. work. Thus, the inflation levels implied by the prices of bond instruments place average inflation below 3% over the next 10 years. However, the costs linked to the energy transition, such as those inherent in a more rational globalization of supply chains, will feed inflation which will be above the old values ​​(less than 2%) but contained within acceptable levels (a just under 3% for advanced economies according to the IMF).

Is the economic downturn underway?

For economic growth, it’s a bit the same thing. The fall in equities after the invasion of Ukraine and until mid-June corresponds to an anticipation of the difficulties to come for consumers and businesses. The sharp deterioration in recently published business surveys, such as the downward revision of the IMF’s growth forecasts for 2022 and 2023, ultimately had little impact on recent stock prices. These even benefit from the lull on the interest rate front. If things leave it at that, we will see that the financial markets, falling throughout the first 6 months, reacted before the anxiety-provoking economic data surged and paralyzed a large part of the investors. In fact, current prices on European equities offer valuation multiples below the average levels historically observed (price/earnings ratio of 12 against an average of 14 over the last 10 years) as does the yield on High Yield bonds in the zone Euro which are around 7%. From this point of view, risky assets appear attractive and suggest to those who have the time ahead of them to invest. But the expectations are based on uncertain assumptions. Have market participants underestimated (or overestimated) the strength of the economic slowdown unfolding before our eyes? The IMF warns of the risks of recession which increase with a more marked slowdown.

The first effects on consumption and corporate results are being felt

For investors, the second quarter 2022 corporate earnings season will provide some answers. As of July 27, 98 of the 600 European stocks have published for the second quarter. It emerges (IBES data) that 57% of these companies achieved results above expectations and 37% below expectations. Over a rolling year, results are up by 27% driven by the energy sectors (+187%), while the banking and real estate sectors have seen their results drop by -13% and -69% respectively. At this stage, companies have been able to preserve their economic performance despite headwinds. Even if the number of companies which revise their outlook downwards is increasing, analysts are nevertheless expecting generally higher results over the next 12 months. However, the effects on consumption are beginning to be felt. For example, Walmart – the US retailer – issued another painful earnings warning on record inflation and weak consumption. For the full year, the group expects earnings per share down -11 to -13%, against -1% three months ago. Rising levels of food and fuel inflation are affecting how customers spend, said the CEO of Walmart, which is conceding new markdowns including on clothing, at the expense of profits. This alert from the group signals a further deterioration in the US retail environment, as inflation hits price-sensitive consumers hard. The consumer is under pressure and the company must multiply its commercial efforts, include cutting back on its margins, to maintain a correct level of activity. The title was penalized (down 7.6% on the day of publication of July 27), before reducing its losses the next day (+3.8%). The post-announcement correction was ultimately small and short-lived, suggesting that the price drop in May has already factored in these difficulties. Companies with high pricing power, whatever its origin, are doing better than the others (LVMH, Alphabet, Microsoft). Attractive valuations and relatively solid results in the current context would militate for a constructive assessment of investment in risky assets while bearing in mind that uncertainty about future economic developments remains high. It would no doubt be appropriate to wait for the publications of the third quarter in order to measure more precisely the capacity for resilience of companies in the face of the headwinds that are blowing.

Article in partnership with Crystal Finance