Is Joe Biden too old to be president? Tinnitus in the US gets louder 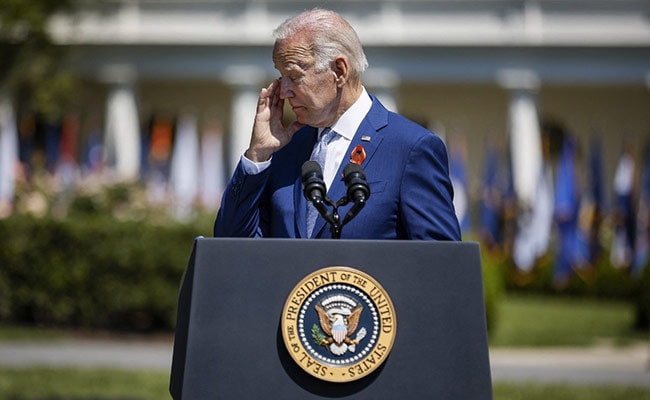 Is Joe Biden too old to be president?

It’s an issue that has provided ample fodder for Republicans and right-wing outlets, while Democrats and most American media are reluctant to address it.

But as the oldest person ever elected to the top US post prepares for a grueling tour of the Middle East, debate is brewing over his apparent desire to run again in 2024.

The issue puts Democrats in a difficult position as there is no clear alternative to Biden – who turns 80 on November 20.

“He’s fit to be president now. But he’s too old for the next election,” concluded The Atlantic in a recent article, sharply criticizing right-wing claims that Biden is suffering from dementia.

Disenchantment with Biden runs deep in his own field, with a New York Times poll released Monday showing that 64% of Democratic voters would prefer another candidate in 2024. His age has been cited as the top reason for those wanting a change. .

The president would be 82 at the start of a second term and 86 at the end. By comparison, Ronald Reagan was 77 years old when he left office in 1989.

“Biden’s age has become an uncomfortable issue for him and his party,” the New York Times wrote on Saturday, describing a White House that has become protective, even anxious.

Like his predecessors, Biden has exhausting responsibilities, from the war in Ukraine and runaway inflation to the gun violence raging across the country and a fiercely conservative Supreme Court.

There are certainly plenty of Americans who envy his health, with a checkup last November concluding that he is a “vigorous” man who suffers from mild problems with acid reflux and arthritis.

But his appearance betrays the heavy toll taken by the office: his white hair is thinning, his gait cautious.

He sometimes loses his train of thought or stumbles when reading a teleprompter, and the stutter he overcame as a child periodically reappears.

The White House has repeatedly had to backtrack on ill-timed remarks by the president on sensitive diplomatic issues.

Biden gives fewer press conferences and interviews than his predecessors, preferring to publish opinion pieces in newspapers whose content can be carefully controlled.

On weekends, he often disappears into one of his two Delaware homes for two or three days. White House correspondents only see him once, from a distance, when he goes to Mass.

And when G7 leaders posed for a photo at a June summit, it was impossible to ignore the age gap between Biden and Canadian Prime Minister Justin Trudeau, 50, or French President Emmanuel Macron, 44.

But his aides vigorously defend him, with senior adviser Mike Donilon telling The New York Times that the president wants to “spend four hours planning how we’re going to start working on domestic politics, when all the younger officials want to do is sleep.” on the plane.

Biden, after a minor but highly publicized bicycle accident on June 18, was keen to get back in the saddle on Sunday and joke about his misadventure with reporters.

The president is far from an exception in American politics, where many important actors are over 70, including his predecessor Donald Trump, who is currently 76.

Trump – a potential Republican candidate in 2024 – knows the age card plays well and is keen to use it.

“There are a lot of people in their 80s and even 90s who are as good and sharp as ever. Biden is not one of them, but it has little to do with his age. In fact, life begins at 80!” Trump wrote on his social media platform.

In touch with young voters?

In addition to health issues, there is also the political issue of how a president born during World War II can keep in touch with younger Americans.

How does he respond, for example, to young protesters who protested outside the White House against the Supreme Court withdrawing the federal right to abortion?

According to a Morning Consult poll conducted in April and May, only 43% of Democrats ages 18-34 believe Biden is delivering on his promises.

But who could replace him? Commentators are skeptical about the chances of Vice President Kamala Harris, 57, who would be a natural candidate if Biden withdraws.

A member of the party’s younger guard, such as California Governor Gavin Newsom, 54, or Transportation Secretary Pete Buttigieg, 40, would be another option.

But a favorite has yet to emerge from the Democratic camp.

(This story was not edited by the NDTV team and is automatically generated from a distributed feed.)