Is Tom Brady retiring in 2022? What we know about Bucs QB’s NFL future 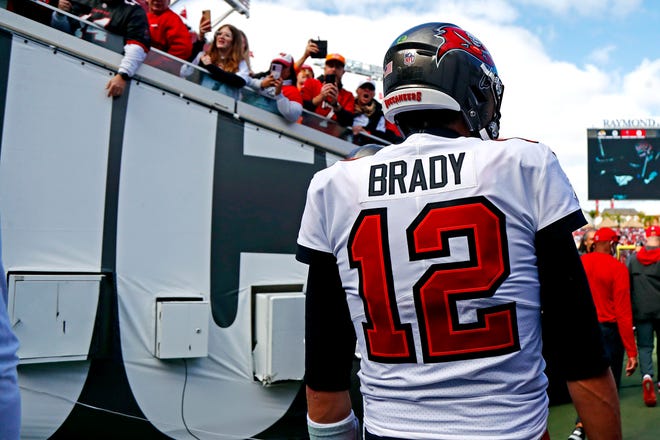 Tom Brady had pulled off playoff miracles before, and he nearly did it again for the Tampa Bay Buccaneers on Sunday.

The second-half effort was enough to tie the game at 27, but Matthew Stafford and the Rams answered with the game on the line to snatch the game back and advance to the NFC championship game.

That denied Brady’s quest for Super Bowl No. 8 more back-to-back titles with the Buccaneers. Now Tampa Bay enters the offseason with a singular question leading the mind:

Will Brady be back for the 2022 season? Or has the “GOAT” played his final NFL game?

Brady’s focus had been on the playoffs, he said after Sunday’s game. Brady added that he has not thought much about his future.

“I haven’t put a lot of thought into it,” Brady said. “So, you know, we will just take it day by day and kind of see where we are at.”

In response to a question about whether he thought during the game it might be his final contest, he replied:

“No, I was thinking about winning. That’s kind of my mentality, always to go out there are try to win. Give my team the best chance to win.”

Brady famously takes his physical health seriously, so even at age 44, his body can withstand the rigors of a full NFL campaign.

That means, as USA TODAY Sports’ Jarrett Bell wrote, the decision about his future doesn’t necessarily hinge on his health.

Brady will turn 45 prior to next season.

What has Tom Brady said in past about retirement?

Buccaneers general manager Jason Licht said in May 2021 that Brady could play until he was 50 if he wanted to. The quarterback was a bit more hesitant.

“I’ll just have to evaluate all that when it comes,” Brady added. “It’s a physical sport; anything could happen. So I’m going to go out there this year and give everything I’ve got like I’ve done every other year, and then take it from there.”

What will impact Tom Brady’s decision?

As Brady’s former Patriots teammate Rob Ninkovich pointed out on ESPN’s “Get Up” last week, Brady does not have anything left to prove on the football field.

His seven Super Bowls are a record. But past accomplishments likely won’t be a good enough reason for Brady to hang up the cleats.

As his children get older, there will be family considerations. He has burgeoning business endeavors in apparel (the Brady line partnered with college athletes through new name, image and likeness rules), cryptocurrency and the media space – his production company helped air a 10-part documentary about his Super Bowl seasons on ESPN+.

Could there be enough going on for Brady outside football that it factors into the decision?

What is Tom Brady’s contract?

Brady initially signed a two-year, $50 million deal with the Buccaneers in March 2020. He signed a one-year extension after last season, with $15 million of the $20 million signing bonus deferred to 2022, according to Spotrac.

If Brady retires this offseason, the Buccaneers will recoup $16 million of the signing bonus.

What did Bruce Arians say about Tom Brady’s future?

Arians told the Tampa Bay Times on Friday he would be “shocked” if Brady didn’t come back for the 2022 season.

On Sunday, Arians said the decision will be entirely up to Brady. The coach added he wasn’t sure if his quarterback would return.

How did Tom Brady leave the New England Patriots?

Brady’s departure from New England coincided with the onset of restrictions and lockdown during the early days of the coronavirus pandemic. For example, his tearful meeting with Patriots owner Robert Kraft took place outdoors on a porch, according to reports.

In the past, Brady has been deliberate and not necessarily secretive about his desires. When it seemed certain he would finish his career with the New England Patriots, despite putting his Massachusetts mansion up for sale, he was shocked the league by signing with the Buccaneers.