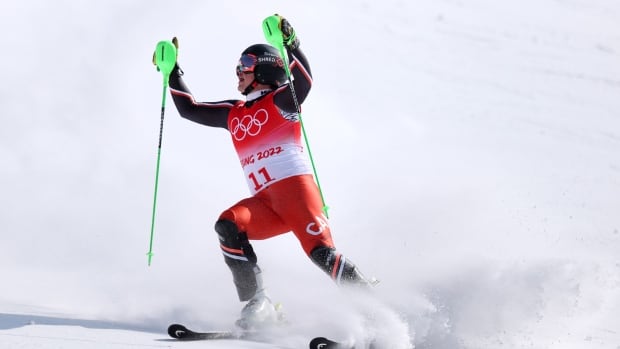 The 24-year-old shared the podium with Austria’s Johannes Strolz, who won gold, and Norway’s Aleksander Aamodt Kilde, who took the silver medal after falling 0.59 seconds short of first place.

Strolz, 29, who has only ever won one World Cup slalom, was fourth fastest after the downhill run. But he was half a second quicker than anyone else in the slalom, helping him edge Kilde, who won the first run by 0.58 seconds.

The combined adds the times from one downhill run and one slalom run.

Jack Crawford of Toronto finished third in the men’s alpine combined event at the Beijing Olympics with a total time of 2:32.11. It’s Canada’s first-ever Olympic medal in alpine combined. 3:54

Crawford was 0.68 behind Strolz and 0.09 behind Kilde. World champion Marco Schwarz of Austria was fifth, just behind Swiss rival Justin Murisier.

Kilde won his second medal of the Beijing Games. He also took bronze in the super-G on Tuesday.

One of the favorites for the race, Alexis Pinturault, had a disappointing first run and then fell in the slalom.

The Frenchman won silver in the combined at the 2021 word championships — where he was defending his title — and at the 2018 Pyeongchang Games. He had failed to finish four of six slalom races in the World Cup this season.

Another pre-race favorite, Loic Meillard of Switzerland, had an error in the downhill but managed to stay on the course. He failed to finish the second run after straddling a gate.

Thursday’s race had only 27 total entrants, compared to 43 for the downhill and 47 for the super-G earlier in the week. It’s the first time in Olympic history that the event is taking place without at least one American.

The downhill run had to be delayed for about 10 minutes when Yannick Chabloz crashed and was taken away in a sled. The Swiss skier tumbled into a barrier and then slid down part of the mountain.

Crawford finished fourth in the Beijing 2022 downhill event and second in the downhill portion of the alpine combined, just 0.02 seconds behind Norway’s Kilde, before skiing to the second best time in the slalom run.

With his podium, Crawford picks up Canada’s first-ever medal in the Olympic alpine combined and the first Canadian Olympic alpine medal since Jan Hudec won bronze in men’s super-G at Sochi 2014.