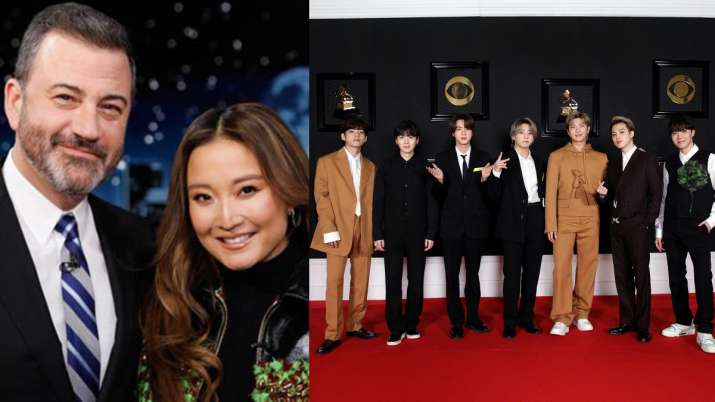 Talk show host Jimmy Kimmel is facing the ire of fans of K-pop band BTS. Popularly known as ARMY, the boyband fans are furious after the host compared BTS to COVID-19, saying they are both ‘very dangerous’. It was after actress Ashley Parks joined him as a guest on Jimmy Kimmel Live and she remembered singing BTS Dynamite on her popular show Emily in Paris.

Kimmel shared with him when BTS appeared on his show. He said, “You sang a BTS song on the show and I wonder what the outcome of something like this is because I know it. We have BTS on our show and people are just as fans of them as they are outside.” Will be camping, and they’re probably out in the parking lot, waiting for the next time to come. They’re absolutely crazy about these guys. You have to be careful with ARMY because they can attack.” In response, Ashley said that she herself is ARMY. “Then you won’t be attacked,” Jimmy told him.

Continuing on, Ashley shared how excited she was when BTS members RM and V shared the dynamite clip on their Instagram account, shortly after she was diagnosed with the Omicron version of COVID-19. “Thought it was BTS fever? Oh, they’re both so dangerous. You’re the lucky one who came out alive,” Jimmy teased him.

The comparison didn’t go down well with the ARMY. The host is being called out for his ‘racist’ remarks and fans of the band are tagging him as ‘xenophobic’. Sample some of these tweets:

K-pop superband BTS, consisting of RM, Jin, Suga, Jay Hope, Jimin, V and Jungkook, is one of the most loved bands in the world. They enjoy a phenomenal fan following globally. Septet is currently taking a long vacation to spend the holiday season with his family members after returning from the US, he is expected to return to work ahead of the Grammy Awards ceremony on January 31 (US Pacific Time). BTS is nominated in the Best Pop Duo or Group Performance category.