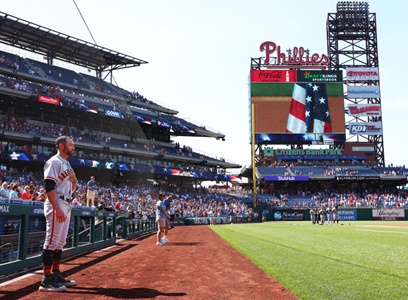 MLB Giants manager Gabe Kapler stood for the national anthem at Citizens Bank Park on Monday, “rather than resuming his protest against the country’s lack of strict gun laws by staying at the clubhouse,” writing a blog post on his cause the same day. Happened. SF Chronicle’s John Shea. He wrote, “While I strongly believe in the right to protest and the importance of doing so, I also strongly believe in honoring and mourning the service men and women of our country who fought and died for that right.” ” Kapler said in the dugout hours ago. The first pitch, “I’m going to come out tonight. I spent a little time thinking about this and talking to some of the people around the game and some of the veterans and some of the people who invest in gun control.” Kapler “won’t say his plans for the national anthem” after Monday. He committed to make Memorial Day donations to Everytown to help end gun violence, and Heart & Armor, a veterans health charity (SF Chronicle, 5/30,

coupler’s opposition: Kapler said Friday that he would “be at the clubhouse during the national anthem at the ballgame to protest the nation’s lack of action following the school shooting in Uvalde, Texas.” “I don’t plan on coming out for the national anthem until I feel better about the direction of my country,” he said. Earlier on Friday, Kapler published a blog post about his reaction, saying he regretted not creating a form of protest, including taking a knee on the night of the shooting. Where would be, Kapler said, “wherever my job takes me, not on the field. Office, Cage. It’s not uncommon that we’re talking around that time, especially for managers.” When the national anthem was played before Friday’s game against the Reds at Citizens Bank Park, Kapler was not on the field (SF Chronicle, 5/27) Scott Miller in NY reported Friday, “only seven veterans were on the field—two coaches, four players and an athletic trainer—when the anthem was played” (NY Times, 5/27) Dan Volken of USA Today wrote under the headline, “Coupler Is Showing What Real Patriotism Looks Like” (5/28,

Kerr’s support: Warriors coach Steve Kerr, asked about Kapler’s protest, said he would “always support any form of peaceful protest.” “That’s the foundation of our country,” Kerr said on Sunday. Kerr then gave an “emotional speech” on the day of the shooting. Chris Bambaka of USA Today wrote to Kapler, like White Sox manager Tony La Russa, “there may be detractors,” but Kerr “has support in the Bay Area” (USA TODAY, 5/30) In SF, Scott Osler said, “Steve Kerr and Gabe Kapler add their voices to the active history of the Bay Area” (SF Chronicle, 5/29) in NY, Mike Lupica: “Thankfully Steve Kerr didn’t join the sport after the Texas school shooting” (NY Daily News, 5/28,

reaction in baseball: The White Sox’ La Russa said, “He is absolutely right … concerned about what is happening in our country. … Where I disagree that the flag and anthem to express your objections There are no suitable places” (multi., 5/28) in NY, Sarah Valenzuela wrote to Mets manager Buck Showalter “supports Kapler’s action and will support his players if they decide to do so.” Showalter: “I wish we were more open-minded to everyone’s views and opinions. … I’m very attracted to people who listen and sometimes voice their opinions from other environments, things they are aware of.” Has happened” (NY Daily News, 5/29,

big trend: In San Antonio, Mike Finger wrote, “Not long ago, NBA teams were terrified of posting anything tangent to politics on their Jumbotrons.” An MLB manager would “order Barry Bonds to split rather than publicly announce his plans to drop the national anthem.” And MLB bosses “would have fired their public relations teams for spending an entire game dedicating their Twitter accounts to the facts about gun violence, the way the Yankees and the Rays did on Thursday night” (San Antonio Express-News, 5/29) in NY, Kurt Streeter went with the headline, “The Week When Sports Won’t Let America Look Away” (NY Times, 5/27,

We mourn with the families, friends, and communities of the victims in Uvalde, TX, and Buffalo, NY.

We must continue to remember the lives lost in these senseless acts of violence as well as 211 other mass shootings across our country this year. #EndGunViolence pic.twitter.com/qASQTNzSZX

teams take action: Here are some steps teams are taking in the wake of the recent firing: