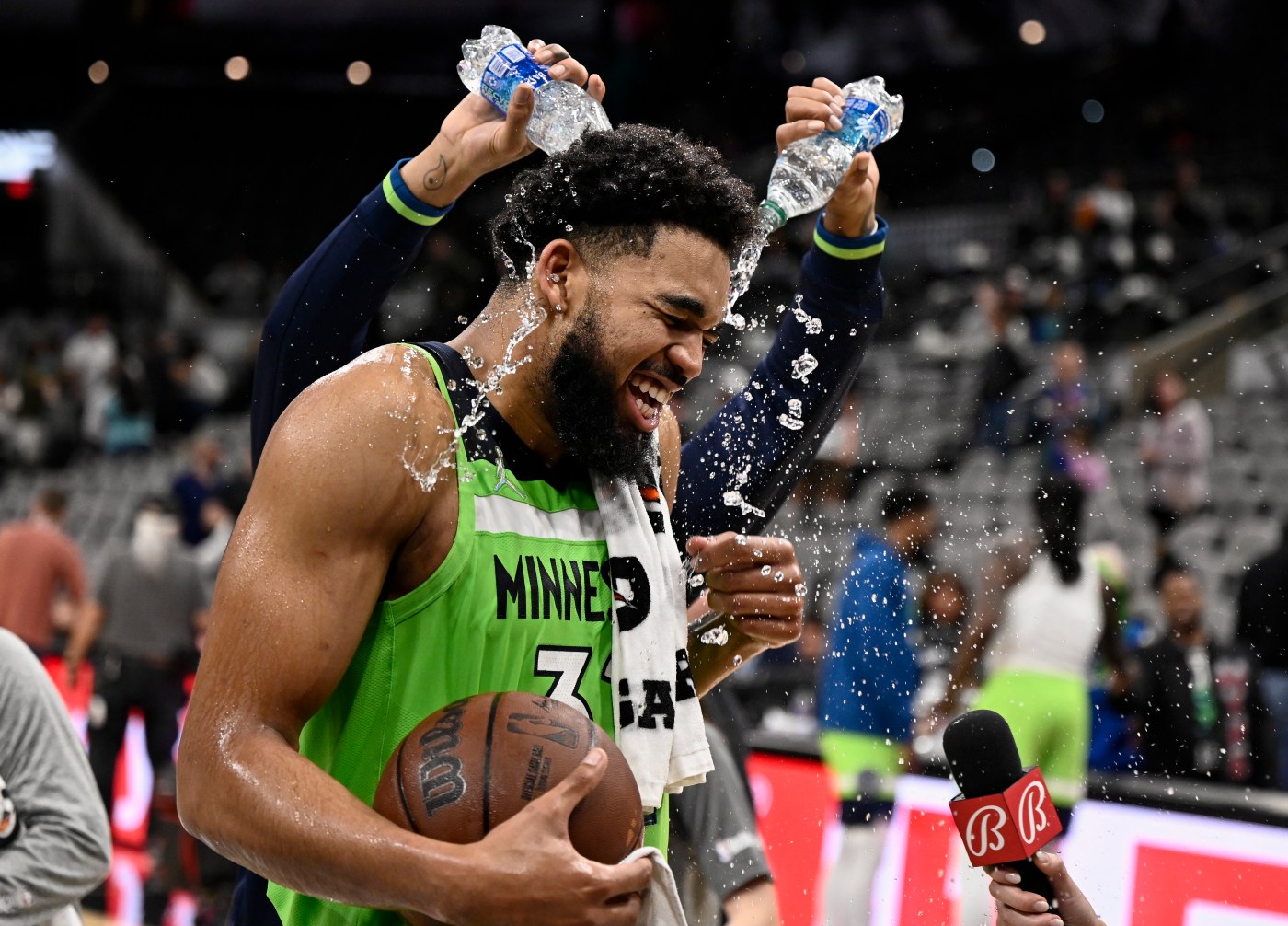 Karl-Anthony Towns heard Naz Reid, his backup center, was out Monday with back spasms and knew he had to produce even more than usual.

Then he went out and scored 60.

Yes, 60 points, including seven triples to go with 17 rebounds. Towns’ late triple put him into that rarified air, which marks the most points scored by a player in an NBA game this season. It’s a career high and a franchise record — besting the previous mark of 56 he set in 2018 in a win over the Hawks. Minnesota needed every point in its 149-139 win Monday in San Antonio.

“I told coach before the game, ‘Hey listen, we need this game. I’ll do whatever it takes. If I need to play 40, 44 minutes, I’ll get it done,'” Towns said. “Coming into the game, I just had that kind of mindset. I had to dominate. I had to be my best, because I thought with the people we were missing … I knew that I had to be playing one of my best games, especially if I expected us to come out with a win. … That was my mentality coming in. I think early on everyone could see I was being very, very aggressive. I was finding some makes.”

The Wolves were thin on front-court depth with Jarred Vanderbilt and Reid on the mend. They were also leaking points throughout the contest. The Spurs were scoring just as easily as Minnesota was.

“That’s probably the best part about it. That was really the most consistent thing we were able to establish all night,” Timberwolves coach Chris Finch said. “They were selling out to protect the rim with everything else we were trying to do. He had the matchup, and they just didn’t have an answer for him. We needed it and he stepped up.”

The Wolves led by just two — 75-73 — at the break. Then Towns put his foot on the accelerator. In the third frame, he scored 32 points while draining five triples.

“Just kind of kept giving him the ball in the third quarter and he created the separation almost all by himself,” Finch said.

Told of his quarter explosion after the game, the center was surprised, himself. Generally, those types of 12-minute bursts are reserved for the game’s elite sharpshooters — the Steph Curry and Klay Thompson-like prototypes.

But don’t forget, Towns himself is a 3-point contest champion who’s equally as capable of going nuclear when the moment strikes. There was a possession that seemed to be going nowhere in the third frame, which had Finch questioning, “What are we doing?” The possession ended with Towns draining a step-back triple in the corner over Zach Collins.

That Towns’ performance came Monday was fitting. He was going off for 60 while Nikola Jokic and Joel Embiid were dueling one another in Philadelphia in a highly-anticipated matchup. Towns scoring 60 was almost like the center’s way of saying, “Hey, don’t forget about me.” No, Minnesota’s center isn’t quite in the same stratosphere at the moment of his peers — they’ve won more and achieved more consistently. But they aren’t any more talented, as Towns reminded the nation Monday.

Jokic led Denver to an impressive road win — which kept the Nuggets two games ahead of Minnesota in the loss column in the race for the No. 6 seed in the Western Conference — but Towns’ performance was what had social media buzzing into the late hours of the evening. He had 56 points through just three quarters.

Towns’ fourth quarter was limited by foul trouble. But he was going to check back in, still with 56 points, with a few minutes to play. But right as he was going in, the Spurs were putting in their reserves — essentially waiving the white flag. Towns looked at Finch and asked what he wanted him to do.

Towns made a free-throw on one possession to get to 57 — the franchise mark. The next time down, the big man missed a triple. The following possession, Jaylen Nowell screamed at Towns, “Don’t pass!”

Not a chance. There was history to be made.

In the locker room after the game, Towns told his teammates “this happens because of y’all.”

“None of this happens without my teammates really saying, ‘Hey, we want you to have a chance at history,’ especially as a center,” Towns said. “They have to pass me the ball. So for them to all be on the same page that we want to get Karl this moment and give him a chance, it just speaks volumes about the chemistry of this team.”