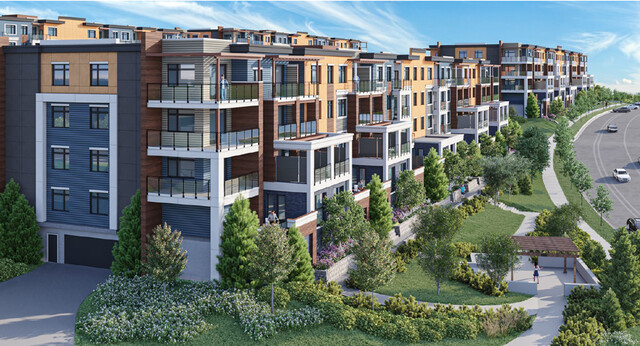 A long-time Kelowna councillor has a message for the company hoping to develop four apartments in the Upper Mission — show some creativity.

Coun. Luke Stack made the plea Monday as council unanimously gave initial consideration to rezoning and OCP amendments that will eventually pave the way for the development on Frost Road.

While council is a long way from seeing a development permit for the property, Stack said a number of large multi-building rental projects over the past few years have basically had the same architectural design.

“They are not as nice as I think they could be,” said Stack.

“The thing I would like to put out here is if these are going to be four very large rental buildings, when it comes to the [development permit]I would really like to see some creativity on the design, because it is going to set the tone for this area.

“As much as we want rental housing, I would really like to see rental housing with some design features that are aesthetically pleasing to the neighbourhood, and perhaps not every single building looking exactly the same.”

Over the past few years, Stack says the finished product of projects approved by council have been, in his words, “a little underwhelming.”

This is not the first time council has taken issue with the development community over buildings that are less than appealing, however it is rare for council to speak out this early in the process.

The project in question is part of an overall development of the Frost Road area. The four-building, 300 rental unit project would be built as a part of a village centre.

City planner Dean Strachan says the village center would include a commercial component to be built directly across Frost Road from the residential piece.

“All of this plays part and parcel to development of a centre…having a concentration of residents with an area that would support a commercial use,” said Strachan.

More often than not, he says, the residential piece comes first.

William at 40: Birthday a milestone in life under scrutiny