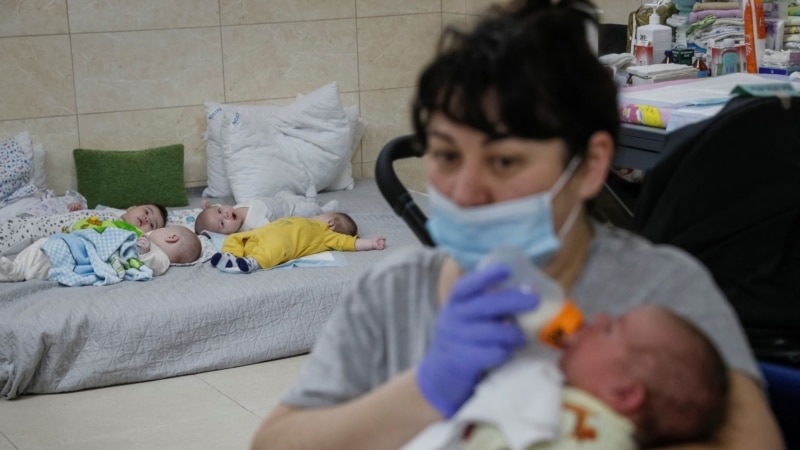 Ukrainian nurse Oksana Martynenko and her colleagues have 21 babies to look after at a makeshift clinic in a residential basement on the outskirts of Kyiv – all of them surrogates whose parents cannot come to collect them because of the war.

All the while she has her own family to worry about. Her children are in the region around Sumy, a city some 320 kilometers east of the capital which has been bombarded by Russian forces.

It is too dangerous for Martinenko to try to reach them, so they are living with their grandmother.

“We haven’t been able to get home since Feb. 24,” she told Reuters on Tuesday, as she changed one of the baby’s diapers.

“I am from Sumy region, but I cannot go there. I have children at home … They (the Russians) started to bombard our town yesterday. We wait for news every day about what is happening there … But we cannot leave these babies.”

Martynenko calls her family when she can see if they are safe and whether they managed to sleep at night. Ukrainians across the country are dashing between homes and air raid shelters as advancing Russian forces attack cities and towns.

In the bare surroundings of the clinic, one nurse pushes a baby carriage with one hand and holds an infant in the other as she and her colleagues comfort the children. Babies lie in a line of small plastic beds and bottles are stacked up to be sterilized.

Staff said that two couples — one from Germany and one from Argentina — had made it to Kyiv to unite with their surrogate children, but it was not clear when they would be able to take them out of the country.

Ukraine is an international surrogacy hub, involving thousands of babies each year in normal times, according to some estimates, many of them taken abroad by foreigners.

The practice has raised concerns among rights groups and some former surrogate mothers over the physical and psychological cost of the process and the risk of exploitation of women and their babies in poorer countries.

The infants in the Kyiv clinic were born in various maternity wards in the capital and have been brought to one place for their safety.

Heavy fighting has raged around Sumy in Ukraine’s northeast since Moscow launched what it calls a “special operation” on Feb. 24 to demilitarize and “de-Nazify” its neighbor, a claim Ukraine rejects as a pretext for an unjustified invasion.

Thousands of people have been killed, millions have fled the country, and towns and cities have been badly damaged by shelling, air strikes and fighting. Russia denies targeting civilians.

So far, Kyiv has beend the worst of the fighting, but the Russian military is slowly closing in on the city and the shelling has intensified. At least five people were killed in shelling and air strikes on the city on Tuesday.

An exhausted Antonina Yefymovych, also a nurse, said that staff were trapped and working around the clock to care for the children.

“We don’t have time to rest now … We try to take short naps, to swap. It is tough, tough,” Yefymovych said.

With the bombardment intensifying, the explosions are getting louder. “It is terrifying indeed.”