Kyrgios hits out at Hewitt after “throwing him under the bus” 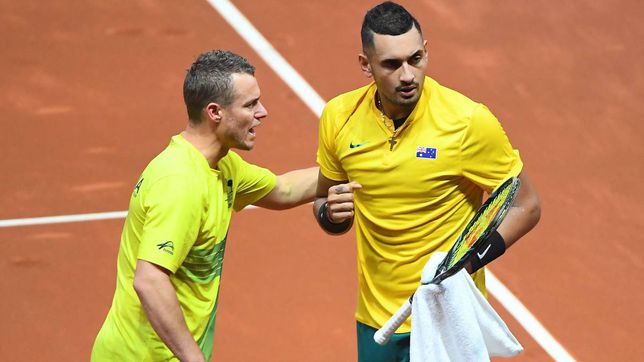 The United Cup, which should have been a party for Team Australia as hosts, has turned into a nightmare for an Aussie team that now looks like a ‘house of trouble’ and that it has already lost its first tie against Great Britain after a scare in the team.

The crisis started with the sudden loss of Nick Kyrgios due to injurywho was going to be Australia’s number one in the tournament and who had to resign due to an ankle problem. A resignation that angered Australian captain Lleyton Hewitt, who launched a scathing allegation against Kyrgios. “He came on the same plane as the rest of the team. His resignation was a hard blow because of the lack of communication, as nobody knew about it until it hit the media. I’m proud of Alex de Minaur for his effort and the way he prioritizes playing for his country.”

As if that weren’t enough, just hours before his confrontation with Harriet Dart, Australian Ajla Tomljanovic announced her withdrawal from injury to her left knee. As reported by journalist Jose Morgado. “Big disappointment. Ajla Tomljanovic ruled out of today’s United Cup match against Great Britain (Australia are already 0-2 down…) It will be Maddison Inglis looking for a much needed win for Australia Harriet Dart Will play against”. a match which was eventually won by Dart and in which Australia lost the tie.

Neither petty nor lazy, Kyrgios took advantage of the tweet published by Morgado to make scathing allegations against Hewitt and if Tomljanovic was being picked like him for his sudden abandonment of the contest. “I wonder if Stosur will also throw her under the bus like our captain (Hewitt) did to me … ‘It’s hard to prepare when you don’t know what’s happening.'”

Mmm I wonder if Stosur will throw her under the bus like our captain did for me…..’It’s hard to prepare when you don’t know what’s going on’

Today there is another in the list of disagreements between Kyrgios and Hewitt as Hewitt is the captain of the Australian tennis teams. In fact, During the last Davis Cup final, Kyrgios resigned to play for Australia, angering Hewitt again. Despite this and without Kyrgios, the Australian team managed to reach the final before losing to Canada. A final that looks more complicated in this United Cup that has turned into a veritable nightmare for Australia.