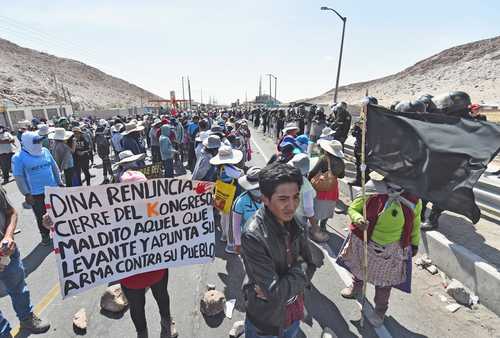 ▲ Protesters demanding the resignation of President Dina Boluarte block a highway in Arequipa, Peru.photo of app

Lemon. President Dina Boluaarte’s government has been in office for 41 days and 41 have been killed by security forces in the crackdown on anti-government protests. A scary statistic. The total number of deaths since the protests began in December, when Pedro Castillo fell and Boluarte took office, is 49, including a policeman who was beaten to death when the protests broke out. During this, 18 people were killed by the police. The Andean town of Juliaca, and seven residents died due to accidents due to not being able to reach the health center or due to roadblocks.

The number of wounded exceeds 600, a good part by shots. The resignation of Boluaarte, accused of the deaths caused by the repression, the Congress’s rejection of progress this year and the authority controlling the elections scheduled for April 2024, are demands uniting the opposition of many local and political leaders. To which political parties have no answer. It is basically Andean and Peasant protest.

Bloody repression, a state of emergency, arrests, terroristic accusations against protesters, and campaigns by the government, Congress, and the media to criminalize them, did not stop mass protests demanding Boluaarte’s resignation. They began in the southern Andes – the poorest and most discriminated against region, and most identified with ousted and imprisoned former President Pedro Castillo – where they are widespread and have crippled the region, and spreading to the rest of the country. An indefinite strike has been called in various sectors. This Monday, several disruptions in the South reached the North. The Panamericana Norte Highway was blocked at La Libertad, about 500 kilometers from Lima. Amazon regions have also joined the protest.

From the Andes, where daily mobilization against the government takes place, farming communities and townspeople declare take lima, a massive march that travels to the capital to broaden protests into the political and economic center of the country. Mobilization for Lima has already begun from various regions. Officials fear that the mass protests in Lima are the final chapter of a government that shows strength for repression but great popular and political weakness, threatening not to let them reach the capital, where residents have already turned to Boluarte. demanding resignation. AFP reported that around 3,000 of ApuriMac were blocked in Pisco to enforce identity controls. The government has 71 percent disapproval and only 19 percent approval, according to a poll by the Institute of Peruvian Studies (IEP). The Congress which supports and opposes it has 88 per cent disapproval and only 9 per cent approval.

Amid pain and outrage, the streets of Andean cities, such as Juliaca, a city in the highland region of Puno, and Ayacucho, where security forces have shot 18 and 10 residents respectively, are the last of the mass to bid farewell. Has been filled with processions of rites. dead. In recent days, a grand farewell was held in Cusco for farmer leader Remo Candia, president of the farmers’ federation of Anta province, who was shot dead last Wednesday during the suppression of a protest in that city. Music bands have joined the daily protest mobilization, in which Andean rhythms are sung. Dina, murderer, people reject you,

Argentine priest Luis Humberto Bejar was one of those present at the mass farewell of the 18 dead from Juliaca in the city’s main square. This has been his last public activity in Juliaca after more than 25 years as a priest in this Andean city. The Catholic Church has ordered him to leave his parish to support protests that demand Bolourte’s resignation and qualms. the killing death of security forces. Badger says it was after those statements that the Catholic hierarchy began to harass him. Bishop Oscar Carrion of Puno withdrew his license as parish priest of Pucara, where he served, and told him he was to retire for a year. to reflect, In a letter addressed to Bishop Carrión, the Argentine priest once again questions the repression, pointing to Juliaca. it smells of death and defended his intervention during the protests, saying he was close to the families of the victims and the rescue Fundamental rights of the Quechua and Aymara peoples,

In his desire to discredit and criminalize the protests, Boluaarte has said that rifles and ammunition for the protesters came from Bolivia. He blames the Bolivian organization Los Ponchos Rojos for this alleged arms smuggling and links it to former President Evo Morales. A serious allegation made without presenting a single proof, but widely repeated by the media.

The evidence leaves this statement of the President baseless. He has not been able to explain that, if the protesters were armed, as the government now denounces, all those killed and injured by gunfire are the protesters themselves and not a single police officer has been killed or injured by firearms. Autopsies of 18 dead in Juliaca found projectiles in nine bodies—another nine were also killed by firearms, but no traces of projectiles were found—results confirm all projectiles were obtained from weapons used by police, in six cases In the AKM-47 rifle, two for pellet shotgun and one for pistol shot. There are videos that show police and army firing on protesters in Juliaca and elsewhere.

There is a notice of arbitrary arrest. Over 300 people have been detained since the protest began. In Ayacucho, the president of the Ayacucho People’s Defense Front, Rocío Leandro, and seven other leaders were arrested, accused of having links to Sendero Luminoso, an armed Maoist organization active in the 1980s and 1990s that has been in power for more than 20 years. is inactive. armed groups – with the exception of an isolated dissident column in a mountainous region – and as successors to a group of fringe activities that now act politically and not militarily. In the 1990s, Leandro served a sentence for being part of Sendero, but the police charge for which he is now arrested did not present evidence that he promoted terrorist activities during the protests. The purpose of this case is to link all protests with hiking and terrorism. present as police Examination Terrorism against the prisoners, the books of Marx, Lenin or Mao that they got. So absurd and dangerous.